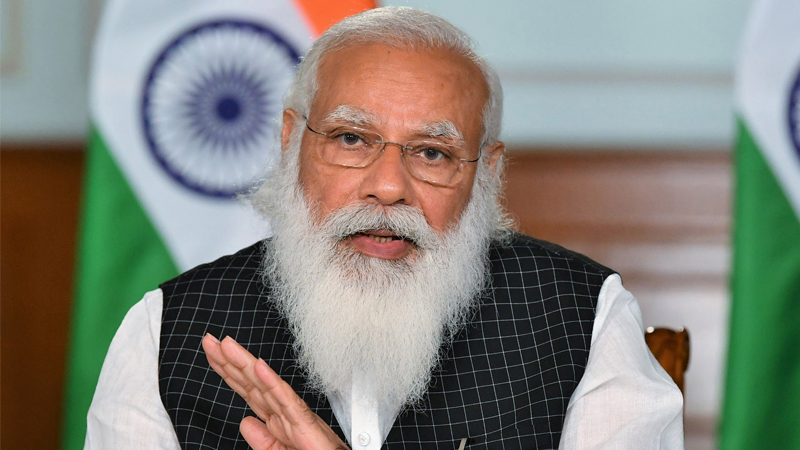 The Prime Minister,  Shri Narendra Modi interacted with the Chief Ministers of various states on April 8 regarding the COVID-19 situation via video conference.

Union Home Minister outlined the efforts undertaken by the government in the battle against Covid. He also gave an overview of the progress in the vaccination drive in the country. Union Health Secretary gave a presentation on the Covid situation in the country, focussing on states that are experiencing high caseload at present, and emphasized the need to increase testing in these states. He also shared details of vaccine production and supply in the country.

The Chief Ministers thanked the Prime Minister for leading the collective fight against the virus. They gave feedback about the Covid situation in their states. They said that the timely initiation of vaccination drive is resulting in saving lakhs of lives. Issues of vaccine hesitancy and vaccine wastage were also discussed.

The Prime Minister stressed few clear facts before the Chief Ministers.First, the country has crossed the peak of the first wave and the growth rate is much faster than the earlier. Second, many states, including Maharashtra, Chhattisgarh, Punjab, Madhya Pradesh and Gujarat have crossed the peak of the first wave. Many other states are moving in that direction. This is a serious concern, he said. Third, This time people have grown much more casual, in some states even administration too. In such a situation, sharp rise of the cases has created difficulties.

However, the Prime Minister emphasized, that despite the challenges, we have better experience, resources and, also the vaccine. People’s involvement along with hard working doctors and health care staff hascontributed a lot in managing the situation and they are still doing so.

The Prime Minister said “we have to keep focussing on ‘Test, Track, Treat’, Covid appropriate behaviour andCovid Management”.The Prime Minister pointed out that we have to contain human host to contain the virus and testing and tracking has a very important role to play in this. The Prime Minister explained that Testing is critical to detect the extent of infection in the community and also to identify people who can spread the infection: The number of tests being done on a daily basis needs to be significantly increased with the aim to reduce positivity to 5% or less, with focused and targeted testing in containment zones and areas where clusters of cases are being reported. The criticality of ramping up the share of RT-PCR tests to at least 70% of total tests done by increasing the RT-PCR testing infrastructure was also stressed upon.

Observing that every single positive case has the potential to spread the virus to others in the absence of adequate preventive measures, contact tracing and follow-up as an important activity crucial to curbing the spread of infection in the community was discussed. The Prime Minister said that at least 30 contacts of a positive case must be traced, tested and quarantined, preferably within first 72 hours. Similarly, boundaries of containment zone should be clear. The Prime Minister said that there should not be any relaxation in our efforts due to ‘covid fatigue’. He also asked for adherence to the Health Ministry SoPs in containment zones. He also emphasized the need for comprehensive data on deaths with detailed analysis. He asked states to join webinars organized by AIIMs, Delhi every Tuesday and Friday.

The Prime Minister requested the States for 100 per cent vaccination of 45 plus population in the high focus districts. The Prime Minister called for ‘Teeka Utsav’ – Vaccination Festival between 11th  April, Jayanti of Jyotiba Phule and 14th April Jayanti of Baba Saheb Ambedkar. Effort should be to vaccinate maximum number of people during the vaccination festival. He also called upon the youth to help in getting everyone above 45 years of age vaccinated.

The Prime Minister cautioned against carelessness, He said that we have to keep in mind that despite vaccination, there should not be lowering of guard and proper precautions should be continued to be taken. Insisting on his mantra of ‘dawaibhi-kadaibhi’, the Prime Minister insisted on awareness about the Covid appropriate behaviour.