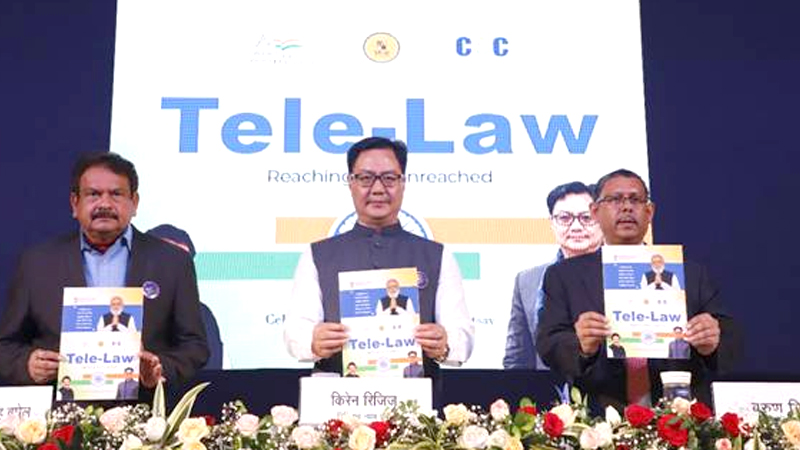 Union Minister of Law and Justice Shri Kiren Rijiju launched the Citizen’s Tele-Law Mobile App. He also felicitated the Tele-Law Frontline Functionaries. Minister of State for Law and Justice Prof. S.P. Singh Baghel was also present on the occasion. The event was part of Azadi ka Amrit Mahotsav celebrations, celebrated by the Department of Justice from 8th to 14th November 2021.

In his message, Union Minister of Law and Justice Shri Kiren Rijiju said New India is developed through the PM’s vision of Digital India. Under the Digital India scheme, e-interface platform Tele Law was developed. It is a platform to strengthen the pre-litigation mechanism in the country. He said the goal of this platform is to achieve Sabka Prayas Sabka Nyay. He gave a call to come together to make common people self-reliant and justice accessible to them, in the period of Azadi ka Amrit Mahotsav.

Addressing the gathering, the Union Minister of Law and Justice Shri Kiren Rijiju announced the expansion of Tele-Law in 75,000 Gram Panchayats covering all States / UTs as a part of the 75 years of India’s Independence celebrations. He also appealed to the Lawyers to join the Tele-Law movement and provide legal guidance and consultation as basic steps to legal aid services. He appreciated the team effort of all frontline functionaries that has enabled Tele-Law to cross the 12 lakh + beneficiary mark and exhorted the ethos of Sabka Prayas,Sabko Nyaya to facilitate the last mile delivery of justice and legal aid services. He also encouraged  the participants to download the Citizens’ Tele-Law Mobile App for optimizing the citizen-centric justice delivery mechanism. Minister of State of Law and Justice Prof. S.P. Singh Baghel highlighted that the Citizens’ Tele-Law Mobile App would be a first of its kind wherein as part of our constitutional mandate for providing equal opportunities before law, every citizen would now be entitled to have access to lawyer on a touch of a finger. He also emphasized that the features of the Mobile App would be available in form of e-tutorial in all scheduled languages and urged the frontline functionaries to ensure its maximum outreach. 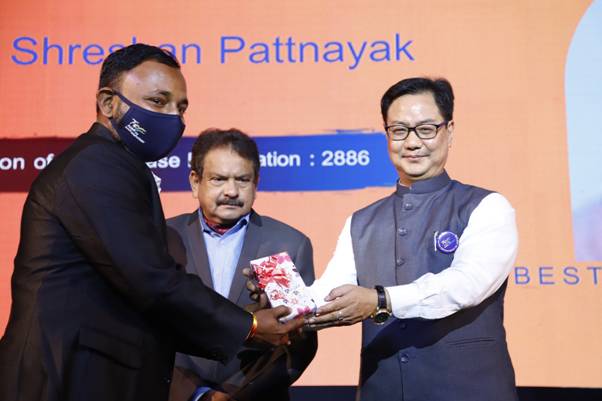 Secretary, Department of Justice, Shri Barun Mitra in his address gave deep insight of the growth trajectory of Tele-Law and focussed on capacity building of all frontline functionaries, quality training of lawyers on various schemes of the centre and states, strengthening of the monitoring mechanism and need for a good performance feedback system for delivery of tangible results.

Shri Dinesh Tyagi, MD CSCe-Gov shared his commitment to provide his relentless support in carrying forward the Tele-Law service through its network of 4 lakh+ CSC centres in the entire country.

Tele-Law: Reaching the Unreached e-interface platform was launched in 2017 by the Department of Justice, to strengthen the pre-litigation mechanism in the country. This is operational in 51,434 Common Service Centres across 50,000 Gram Panchayats in 633 districts Tele-Law leverages technology (viz. tele-video conferencing facilities) to connect the beneficiary with the Panel Lawyer to seek legal advice and consultation for an early redressal of their grievance.

Expanding its reach and ambit the Citizens’ Tele-Law Mobile App intends to widen the access to increased legal information and empowers the masses to identify their problem and chose from appropriate forum of dispute redressal to claim their entitlements and rights by connecting the beneficiary directly to the Panel Lawyer or with an assistance of Para Legal Volunteers, Village Level entrepreneurs, in case of beneficiary who are unable to read or write. The consultation is available free of cost to those entitled for free legal aid under Section 12 of Legal Service Authority, whereas Others could avail at Rs 30/ per consultation. 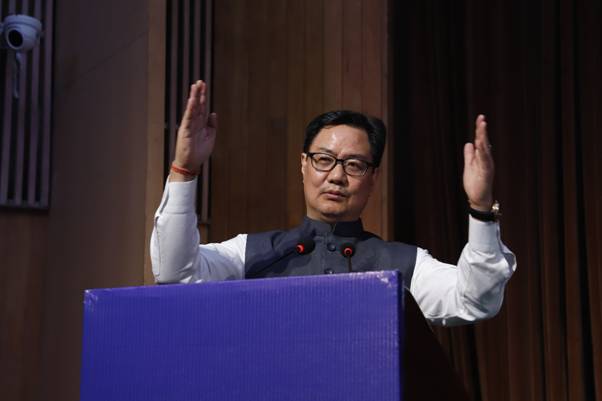 The event also witnessed the felicitation of 124 Frontline functionaries which includes Para Legal Volunteers, Village Level entrepreneurs, Panel Lawyers and State Coordinators representing from different corners of the country. Instrumental in taking the benefits of Tele-Law reach to the far flung and hinterland of the country, these Frontline functionaries are the “Engines” of the Tele-Law programme. Behind the scene efforts of these Volunteers from six zones (North, South, East, West, Central and North-East zone) in the past six months (April- September 2021) were assessed on different parameters which includes number of beneficiaries registered under Tele-Law, innovative tools used to educate the masses on the need for legal advice and consultation; number of beneficiaries who have been provided with advice; number of mobilization and community awareness sessions conducted  and efforts of networking and inter-departmental convergence with other Welfare Schemes of the Government. Prizes were handed over to star performers from each category by Hon’ble Ministers. In order to motivate all these frontline functionaries, the Department of Justice acknowledges their endeavor on a monthly basis.

Various Information, Education and Communication (IEC) both print and digital material was released during the occasion for widespread dissemination and maximizing citizens’ participation under Tele-Law service. Movie titled “Footprints of Tele-Law” was released that highlighted the vibrant growth of Tele-Law & its journey since 2017. Another Tele-Law movie mentioning the key features of Tele-Law  on a black & white storyboard, prepared by Doordarshan for the Department of Justice was released on the occasion. Tele- Law Brochure was also released during the occasion providing reference to the Tele-Law programme in the last four years from 2017-2021. Tele-Law Mascot depicted by a “Female Panel Lawyer holding a mobile phone” was also unveiled by both the Ministers as the government endeavour to empower women and harness their talent for nation building. The Mascot also highlighted that the largest chunk of beneficiaries and sizable number of benefactors i.e Panel Lawyers, Paralegal Volunteers  and Village Level Entrepreneurs are women . A new Logo on Tele-Law was also released on the Day. The Logo is an in-house production of the Department of Justice, however ideas in this regard were invited from the frontline Functionaries through a competition that was held from 1st September, 2021 to 30th September, 2021. Winners of slogan writing and jingle competition were also felicitated.

Earlier during the week, the Department of Justice rolled out several people-intensive campaigns in different areas throughout the country. “Tele-Law on Wheels” campaign along with “Login Week” was flagged off from the Department of Justice premises on 8th November,2021 with the resolve to empower the people to seek legal advice and consultation at the pre-litigation stage that would facilitate them in timely redressal of their grievances, under the Tele-Law: Reaching the Unreached programme. Special branded Mobile Vans displaying Tele-Law posters, broadcasting Tele-Law radio jingle and distributing information leaflets on Tele-Law travelled in 15 States and 27 districts. This was followed by “Login Day” activities, across 633 districts, wherein awareness generation at the community level is still continuing, sensitizing people to seek legal advice and consultation through tele-and video conferencing facilities by urging them to visit their nearest Common Service Centres(CSCs) offering Tele-Law services. These CSCs have been branded as Kanuni Salah Sahahyak Kendra.

Earlier as a part of the Azadi Ka Amrit Mahotsav celebrations on 12th March ,2021, Department of Justice has issued a second edition of e-booklet on Voices of Beneficiaries of Tele-Law which narrates the chronicles of the real time benefits availed by the beneficiaries under different heads viz family matters, fighting injustice, empowering with information, overcoming procedural hurdles, relief for Covid distressed and resolution of property disputes. In addition, on 6th July ,2021, Department of Justice organized its first hybrid Tele-Law event where a Special Postal Cover to mark 9 lakh+ milestones of beneficiaries was released in collaboration with the Department of Posts. A Special Edition of Voices of Beneficiaries along with the 3rd edition of Voice of Beneficiaries was also released and frontline Functionaries of financial year 2020-2021 were felicitated for their relentless contribution under Tele-Law.