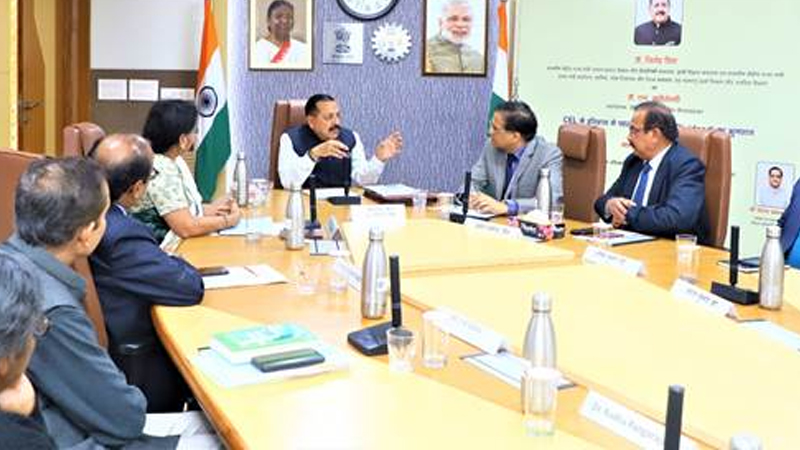 Speaking at a programme of Central Electronics Limited (CEL), a PSU under Department of Scientific Industrial Research (DSIR), Ministry of Science & Technology, the Minister lamented that sometimes best of the R&D institutes tend to follow a downhill course because there are not enough takers for the technologies developed by them. He noted with satisfaction that for the first time in history, CEL is giving a dividend of Rs 7.26 crore to the Government of India.

Dr Jitendra Singh called upon the scientists and officers of CEL to strengthen and upgrade the four main Business Verticals of Railways Safety & Signalling Systems, Strategic Electronics for Defence Applications, SolarPhotovoltaics and Security and Surveillance Systems to the global standards. The Minister said, CEL has been commissioning solar plants since last 25 years and has the distinction in installation of India’s First Solar Power Plant in 1992. But, only in the recent past Solar has emerged as a key source of renewable energy option for the world, he added.

Dr Jitendra Singh CEL remained underrated and unattended organization by the previous governments, but it was Prime Minister Modi, who gave a positive push to scientific endeavors since 2014 through higher budgetary allocations and by taking pathbreaking policy decisions.

Dr Jitendra Singh took pride that CEL is providing indigenously manufactured Phase Control Modules (PCMs) for Missile and Radar programmes in strategic Defence sector and till date 4.8 Lakh PCMs supplied for more than 80 defense radar systems deployed at different locations. The Minister said,CEL is the only production agency in the country for PCMs and the impoort cost is 4 times higher, thus saving forex worth Rs 2000 Crore.

Dr Jitendra Singh said, CEL is excelling in providing products and solutions in Defense, Railways, Clean Energy, ICT, Security and Surveillance sectors by anticipating opportunities in technology in a sustainable way. Also, their foray in Ceramic Radome and Drishti Transmisso meter system is praise worthy.CEL is significantly contributing in Railway sector in the area of Digital Axle counter which are essential for safety & signaling systems of Indian Railways, the Minister added.

Dr Jitendra Singh recalled that CEL had successfully commissioned 500 KWP Solar Power Plant in Palli Panchayat of Samba district in the record time of 18 days which was appreciated by Prime Minister Modi for making Palli village as country`s first Carbon Neutral Panchayat during his visit to Jammu on April 24 to mark the Panchayati Raj Day celebrations. Three hundred forty houses in Palli Panchayat are getting the gift of solar energy by this initiative.

Dr Jitendra Singh said, CEL is doing very well in all of its business verticals and is providing security, surveillance & Smart solutions to government sectors and also entering into manufacturing of smart boards, which is in line with Prime Minister Modi’s vision of Atmanirbhar Bharat.

Dr Jitendra Singh congratulated officers and employees of CEL for achieving maximum profit in the last financial year which enabled it to clear the wage arrears of Rs 19 Crore to CEL Employees and ex-employees. He said, as part of its CSR activities, CEL’s contribution to Government Hospitals of the area is also a noble thought for citizens and society.