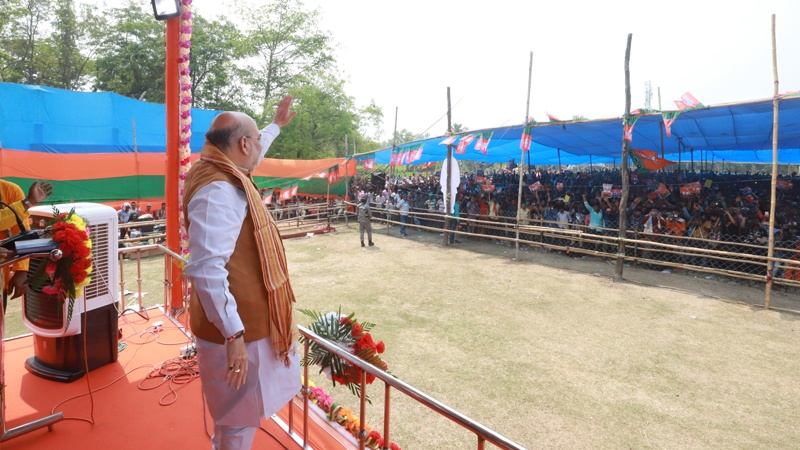 During the public meeting Union Home Minister said Mamata Didi wants to make her nephew the Chief Minister of West Bengal, and on the other hand Hon’ble Prime Minister Shri Narendra Modi ji wants to create ‘ Sonar Bangla’. Now it is up to the people of West Bengal who have to decide whether to vote for making the ‘nephew’  of someone the Chief Minister of the State or to vote for realising the dream of Honourable Prime Minister Shri Narendra Modi ji of creating ‘Sonar Bangla’.

The honest and hard working people of West Bengal have to shell out ‘tax money’ for all works. And Mamata Didi justifies this by saying that it does not matter if someone has to pay Rs 500 for his work. Mamata Didi, for you Rs.500 must be nothing but for poor workers of West Bengal Rs.500 is a big amount which can help him run his household and meet other needs.

In West Bengal under the Trinamool Congress Government more than 300 workers and sympathisers of the Bharatiya Janata Party and its sister organisations were brutally murdered. All the murderers and criminal elements who have got the patronage of the Trinamool Congress Government will not be spared under the Bharatiya Janata Party government once we come to power in West Bengal.

On the coming May 02, the departure of the Trinamool Congress Government is certain.  After May 02, all the murderers of Bharatiya Janata Party workers will be put behind bars and we will find them out from wherever they are and presented before the law and justice will be delivered to all those families whose members were brutally murdered.

We have also decided that immediately after the formation of the Bharatiya Janata Party government in West Bengal we will give all benefits of Other Backward Classes (OBC) reservation to the Mahishya community. Also, the women will get the 33% reservation in all government jobs in West Bengal.

Once the Bharatiya Janata Party forms government in West Bengal all the farmers in the state will get all the benefits of Pradhan Mantri Kisan Samman Nidhi scheme with immediate effect. All the farmers of West Bengal will get Rs.16,000 as first installment and Rs.2,000 as another installment, so a total of Rs.18,000 will be given to farmers.

After the formation of the Bharatiya Janata Party government in West Bengal all the fishermen will get Rs 6,000 every year. Similarly, once our government is formed in the state all the poor and needy people of West Bengal will start getting medical and health benefits of the Ayushman Bharat Yojna which was started by Honourable Prime Minister Shri Narendra Modi ji for entire country but West Bengal Chief Minister Mamata Banerjee did not implement it in the state thus depriving poor and needy of crucial health and medical benefits.

During the Panchayat elections in West Bengal people were stopped from voting and candidates were even assaulted. The candidates had to file their forms through WhatsApp. But this time, the voters should not be worried. This time the goons supported by the Trinamool Congress will see stars during the day. The goons of Trinamool Congress will not be able to stop anyone from casting their vote.