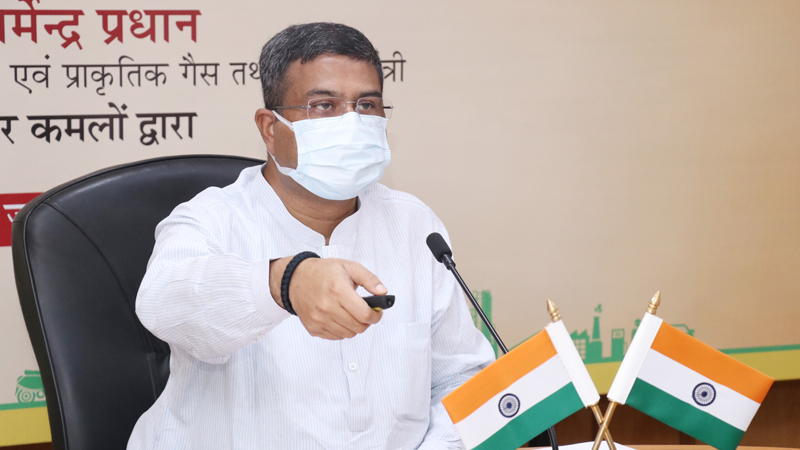 Sh. Dharmendra Pradhan interacted with PNG consumer family in Jhansi who expressed their happiness about the unhindered and cheaper supply of PNG in the house. Sh. Pradhan also interacted with MRU operators in Raigad and Delhi and witnessed the filling of CNG in vehicle through MRU.The MRUs inaugurated today belong to IGL and Mahanagar Gas Limited.

Speaking on the occasion, Sh. Pradhan said that till now, CNG stations and Piped Natural Gas (PNG) were things belonging to metro cities and with the Government efforts these are now reaching cities and towns across the country. The Minister said that Hon’ble Prime Minister Shri Narendra Modi is committed to the cause of climate change mitigation and his efforts have given the world, leadership and enhanced India’s standing in the world. Shri Pradhan added that for us, bringing innovation in energy retailing is not only a business decision, but is also aligned to PM’s vision of a greener future. He also spoke about the PM’s efforts towards enhancing ease of living for citizens and said that today’s inauguration is another step towards this twin objective of a greener future and enhancing ease of living for people.

Asserting that the future of fuel retail is mobile, he spoke about various measures to give boost to this ecosystem including setting up mobile refilling CNG facility. He also outlined the benefits of mobile fuel retailing which includes cost advantage as well as advantage in terms of reaching out to consumers at shopping malls, offices and other places. He also said that going forward, mobile battery swapping should also be explored. “We are bringing in innovation in energy retailing and making it mobile and delivering at the doorsteps”, Shri Pradhan added.

Shri Pradhan said that India has committed to achieve 15% share of natural gas in the primary energy mix by 2030 for a more sustainable energy use which will help reduce environmental pollution, fulfilIndia’s commitment to COP-21. Greater use of natural gas will reduce dependence on fossil fuel and consequently reduce import bill and import dependence, he added.

Sh. Pradhan said that the Ministry is pushing for greater adoption and utilisation of cleaner and greener fuel including Hydrogen, CBG, Ethanol Blended Petrol (EBP) and LNG. He stated that IOCL is soon going to launch Hydrogen dispensing station at its refinery and Vadodara. India has launched the E-100 pilot project for production and distribution of ethanol across the country and is committed to meeting its target of 20 per cent ethanol blending in petrol by 2025.

Shri Pradhan said that CGD sector has emerged as a major sector for natural gas consumption. The demand is only going to increase as more GAs become operational.He exhorted the CGD entities to keep working hard to reach 10,000 CNG stations and 5 crore PNG connections in coming 7-8 years. He said that there is a need for conversion of diesel/petrol vehicles to CNG/LNG for ensuring lesser emissions and cleaner environment. In that direction, Mobile Refueling Unit (MRU) will help achieve supply of CNG in areas not yet connected through pipelines or at places where there is scarcity of land parcels to set up conventional CNG stations. It can store up to 1,500 kg CNG and can fill 150 to 200 vehicles per day. He stressed upon the need to expedite commissioning of more MRUs in the Country to increase mobility of fuel availability through their deployment at various.

Shri Pradhan emphasized that the aim of the government was to move towards the concept of energy retailer where all different transport fuels – Hydrogen, diesel, petrol, CNG/CBG, LNG or EV batteries swapping facility shall be available at a single point.