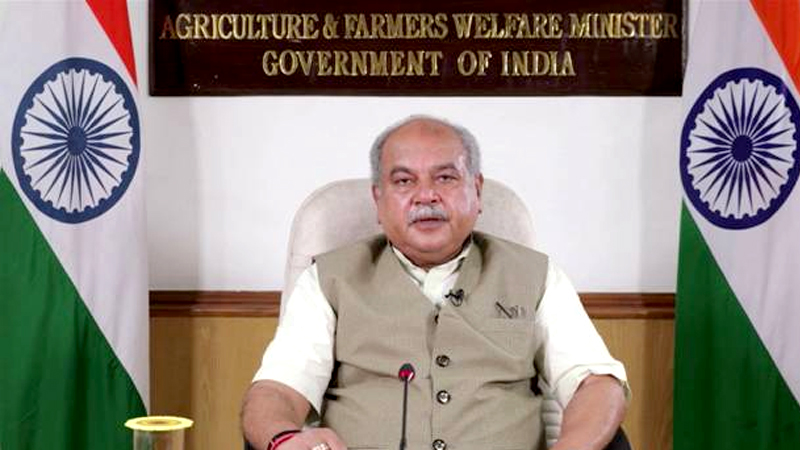 Union Minister of Agriculture and Farmers Welfare, Shri Narendra Singh Tomar participated in the G-20 Agriculture Ministerial meeting organized by Italy, the country which holds the Presidency of G20. Addressing the session on the topic “Research as a driving force behind sustainability”, Shri Tomar said that agricultural research has played an important role in tackling the problem of food security, improving the income of farmers and agriculturists and sustainable use of natural resources for the subsistence of the people. Research contributes significantly to the three aspects of food security – availability, access and affordability.

Union Minister Shri Tomar stated that agricultural research in India has played a major role in transforming the country from being a food importer to exporter. Integrated research efforts can develop a package of techniques and methodologies for improving soil productivity, water management for storage, expansion and efficiency. Technological progress is the key to solving the challenges facing mankind. Today, with an annual production of 308 million tonnes of food grains, India is not only in the realm of food security but is also catering to needs of other countries. India has experienced a revolution in the field of agricultural produce due to the efficient research of scientists. Oilseeds Technology Mission doubled the production of oilseeds in 10 years. India has made great progress in pulses production in recent times due to the introduction of new varieties in the seed system. The call of Prime Minister Shri Narendra Modi in this regard has had a special effect.

Agriculture Minister explained that by the year 2030-31, India’s population is likely to exceed 150 crores, for which the demand for food grains is then estimated to be around 350 million tonnes. Similarly, the demand for edible oils, milk and milk products, meat, eggs, fish, vegetables, fruits and sugar will increase significantly. In comparison, natural resources are limited and there is also the challenge of climate change. The strategy to meet the increased demand revolves around increasing productivity and increasing the income of farmers. Agriculture is contributing to the three biggest challenges of the 21st century – achieving food security, adapting to climate change and mitigating climate change. Important resources like water, energy and land are depleting rapidly. There is a need for sustainability in agriculture along with increasing production and income simultaneously, adapting to climate change by balancing crop, livestock, fisheries and agroforestry systems, increasing resource efficiency, protecting the environment and maintaining ecosystem services.

Shri Tomar said that to make the country self-reliant, concerted efforts in agricultural research on genomics, digital agriculture, climate-smart technologies and methods, efficient water use equipment, development of high yielding and bio-friendly varieties, systematic production, quality and safety standards will continue. There is a need to rethink and adapt agricultural research and development, along with increasing investment in scientific research, to achieve adequate and nutritious food along with environmental sustainability. Working in this direction, we have developed and released 17 varieties of different crops which are resistant to biotic and abiotic stresses. Similarly, ICAR is developing bio-fortified varieties to meet the nutritional requirement of the people. National Mission on Sustainable Agriculture has been launched which promotes integrated farming systems approach in agriculture. India will continue its efforts to cooperate in the exchange of best practices, in research and development and programmatic interventions to increase productivity through the promotion of trade and development of agricultural value chains, sustainable use of natural resources for the benefit of the people.