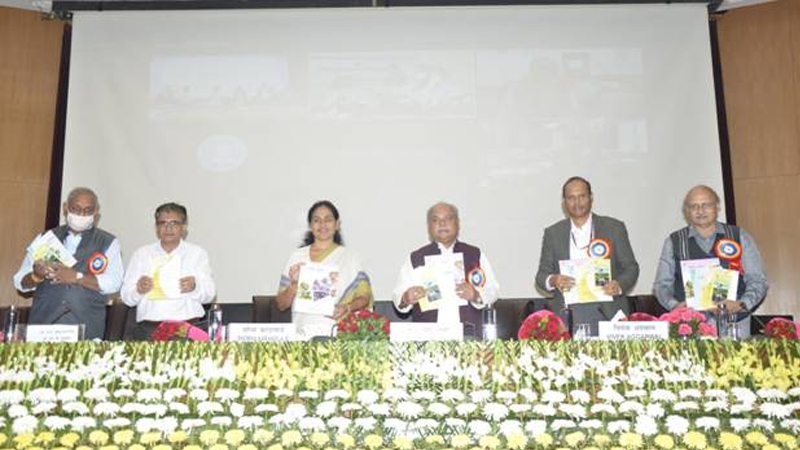 Union Minister of Agriculture and Farmers Welfare, Shri Narendra Singh Tomar virtually inaugurated the Kisan Bhawan and Beekeeper Conference at the Central Institute of Horticulture, Nagaland. Shri Tomar, in his deliberation, expressed that bringing a change in the lives of small and medium farmers is a major goal of the Central Government under the leadership of Prime Minister Shri Narendra Modi.

In this program organized under the Amrit Mahotsav of Azadi, Shri Tomar said that the climate of the North-East region is favourable for agriculture. The area is ideal for the cultivation of horticultural crops especially fruits and vegetables, flowers and spices. Keeping in view the interests of the small and marginal farmers of the North Eastern Region in horticulture, the Central Institute of Horticulture, Nagaland was established under the Central Sector Scheme of the Union Ministry of Agriculture and Farmers Welfare and this institute was established for the development of horticulture and upliftment of the farmers. The state is working well with the government, FPOs and other stakeholders. This brings a change in the living standards of the farmers with the aim that the farmers can contribute to the development of the country along with Nagaland.

Shri Tomar said that Prime Minister Shri Modi puts full emphasis on removing the problems of small and medium farmers, providing them easy loans through banks, increasing profits in agriculture for them. In this connection, every year six thousand rupees are being given as income support to the farmers through the Pradhan Mantri Kisan Samman Nidhi Yojana. The government is constantly making efforts to increase the income of small farmers.

Describing beekeeping as an auxiliary area for increasing the income of farmers, Shri Tomar said that Honey Mission has been started to bring sweet revolution and the Central Government has spent Rs 500 crore on it. The provision has been made under the self-reliant India campaign. Under the Government of India’s plan to form 10 thousand new Farmer Producer Organizations (FPOs), FPOs of honey-producing farmers are also being created. To test honey properly, labs have been set up in many places in the country and processing facilities are also being increased.

The Union Minister said that due to the collective efforts of the beekeepers and the government, the production of honey in the country in the year 2020-21 has increased from 76150 metric tonnes in the year 2013-14 to 1.25 lakh metric tonnes. At the same time, with the help of stakeholders associated with the beekeeping sector, the export of honey in the year 2020-21 has increased from 28 thousand metric tons in the year 2013-14 to about 60 thousand metric tons. Shri Tomar expressed the expectation from the state governments that taking advantage of all the facilities, beekeeper farmers should be provided good prices for their produce. He said that we all should have the same goal that small farmers should get the maximum price for their products. He said that the honey-producing farmers should move forward in collaboration with the State Government, the Central Government has stood with them shoulder to shoulder and step by step.