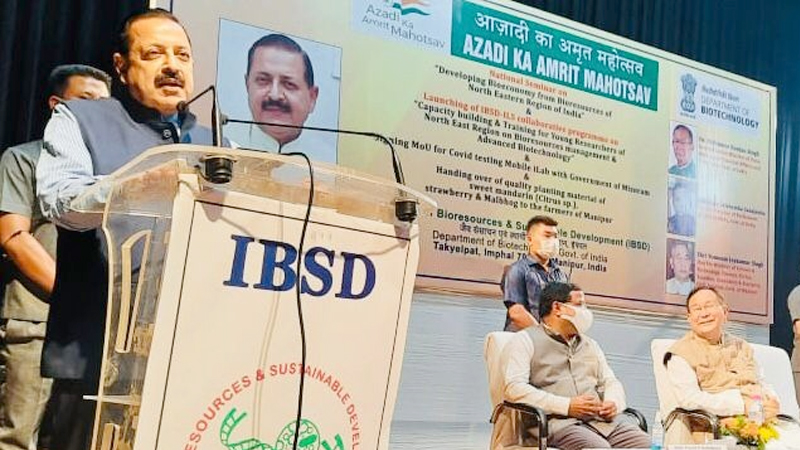 The Minister said, the Eastern Himalayan Region is one of the mega-biodiversity rich zones and is among the 34 biodiversity Hotspots of the world. He said, there is a need to put these invaluable genetic resources to use for the economic growth of the region in particular and to the nation in general, through biotechnological interventions. He was speaking after visit to the Institute of Bio-resources and Sustainable Development (IBSD), Imphal.

Dr Jitendra Singh said, due to consistent and renewed focus of Modi Government, India will be recognized as a Global Bio-manufacturing Hub by 2025 and will figure among the top 5 countries of the world. He said, India’s Bio-Economy is on its way to achieve 150-billion-dollar target from the current 70 billion-dollar by 2025 and will contribute effectively to the Prime Minister’s vision of a 5 trillion-dollar economy by 2024-25.

Dr Jitendra Singh said that on the directives of Prime Minister Narendra Modi, the Department of Biotechnology has played a pivotal role to build capacity in the North Eastern region for carrying out biotechnology research to address issues specific to the region and implement programmes for the societal upliftment of the local communities as the North Eastern region is a genetic treasure house of plant, animal and microbial resources.

Dr Jitendra Singh said that IBSD should not only become a center of excellence in the region with state-of-the-art facilities but also generate technology packages toward employment generation for the welfare of the people. The Institute should be people centered and follow imaginative and innovative approaches to win the confidence of the people through its work, he added. The Minister added that this institute should emerge as a vibrant, active and committed center for research application and commercialization of technology, products and processes and should promote enterprises based on the rich bio-resources of the region to bring happiness to the entire North Eastern region. Dr Jitendra Singh informed that DBT-funded Phyto-pharmaceutical Lab Facility at IBSD is promoting the Phyto-pharmaceutical Mission of North Eastern Region. This Mission that aims to promote the documentation, scientific validation and evaluation of traditional healthcare practices is an important step and assumes special significance in the context of the vast plant resources and diverse traditional healthcare practices of the North-East. He said, the transformational approaches in developing products, processes and technologies with local bio-resources will help in development of traditional knowledge-based therapeutic agents leading to the socio-economic development of the region as well as benefits to traditional health care practitioners.

Giving examples of various successful interventions, Dr Jitendra Singh said that the DBT has supported a project on pilot scale demonstrations of strawberry cultivation with sustainable agro-technological interventions using high-quality planting material in farmers’ fields in Meghalaya jointly at Bio-Resources Development Centre, Shillong and Institute of Horticulture Technology, Mandira, Assam. He said, about 50 tissue-culture raised plantlets of elite varieties of strawberry are proposed to be distributed to the farmers in Manipur.

Similarly, the DBT has designed a programme to improve the production and productivity in Khasi Mandarin, an important fruit crop by producing quality planting material through shoot-tip grafting technology. The programme has a target of producing four lakhs certifiable disease-free quality plants of Khasi Mandarin and Sweet Orange during the three years duration of the project and build capacity of at least 1,000 farmers in the region. Fifty plants of grafted Khasi Mandarin have been generated at AAU-Citrus Research Station, Tinsukia, Assam and will be handed over to the farmers in Manipur state, the Minister added.

The DBT has established a Biotech-KISAN Hub at Horticultural Research Station, Assam Agricultural University (AAU), Kahikuchi, for large scale production of quality planting material of Malbhog banana, which is in high demand in the state of Assam. About 50 macro-propagated Malbhog bananas are proposed to be distributed to the farmers of Manipur.