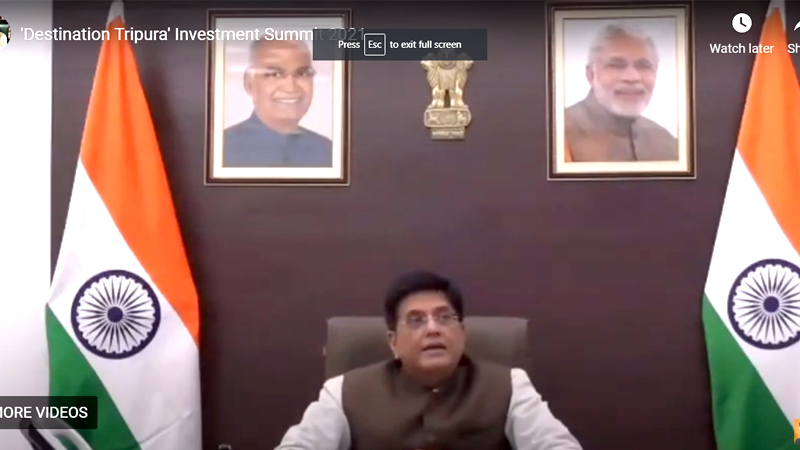 The Minister for Commerce & Industry, Textiles, Consumer Affairs and Food & Public Distribution, Shri Piyush Goyal has said the North-East can emerge as a hub for rubber production. Shri Goyal said the Central Government has planned rubber plantations on a total of 2 lakh hectares in the NE states over 5 years. Addressing the ‘Destination Tripura – Investment Summit’ through video conferencing today, he said Tripura is the second largest producer of rubber in the country with 30,000 ha cultivation. The Minister called upon the State Government to be the first off the block and take advantage as the early harvester to expand rubber plantations in the state.

Four major tyre companies represented by Automotive Tyre Manufacturers Association (ATMA) have together undertaken to contribute Rs.1,000 crores for rubber plantation development in 200,000 hectare land in the Seven states of North East India, over a period of five years. A Memorandum of Understanding was signed between Rubber Board and ATMA on 1 March 2021. Participating tyre companies together transferred Rs 12 crores to the account set up by Rubber Board on 20 May 2021. Funds provided by the tyre companies are being used for procuring planting materials for commencing planting in 2021.

Observing that Bamboo cultivation is another major resource in the NER, Shri Goyal said Tripura is home to the largest bamboo flooring unit. “Tripura has the potential to emerge as the country’s hub of Agarbatti Industry and make India Aatmanirbhar in Bamboo, often called as Green Gold, Industry.”

Shri Goyal applauded the development journey of Tripura under the able leadership of the Chief Minister Shri Biplab Kumar Deb. “The state government has been working tirelessly giving priority to 3 ‘N’s in administration, namely Niyat, Niti & Niyam,” said Shri Goyal, adding, “Tripura is the 4th literate state in the NE, has a thriving handlooms industry, 1.36 lakh weavers in Tripura, Tripura jackfruit has been exported to London.”

Shri Goyal said the Centre is encouraging usage of Agro-textiles & Geotechnical textiles in the NE region through its dedicated schemes. “With improved connectivity through Air, Rail, Road & Waterways, the so called geographical isolation of the State is a thing of the past. The state is an integral part of multimodal connectivity now,” he said.

Shri Goyal said the cross-border Agartala-Akhaura (Bangladesh) rail project worth Rs.972 crore will help promote exports. “With Agartala airport emerging as the 2nd busiest airport in the NE region, Tripura will act as a Gateway to the North East,” he said.

Lauding the state government’s initiatives for Investment Promotion including the single window portal- SWAAGAT, Capital subsidy (30%), Power subsidy (50%), full reimbursement of State GST and 4% interest subvention, Shri Goyal termed it as “one of best investment packages in the country.” Stating that the Investment Summit will help Tripura realise its true potential, Shri Goyal hoped the Conference will help investors become partners in the development journey of the state.

Expressing his shock and condolences on the untimely demise of CDS, General Bipin Rawat, Shri Goyal quoted him, “We seek neither कृतज्ञता (gratitude) nor तालियाँ (applause) because we firmly believe in “ख़ामोशी से बनाते रहो पहचान अपनी, हवाये खुद तुम्हारा तराना गाएंगी !” (We seek neither gratitude nor applause; through silence let us make ourselves known, the whole world will come at your feet on their own.”