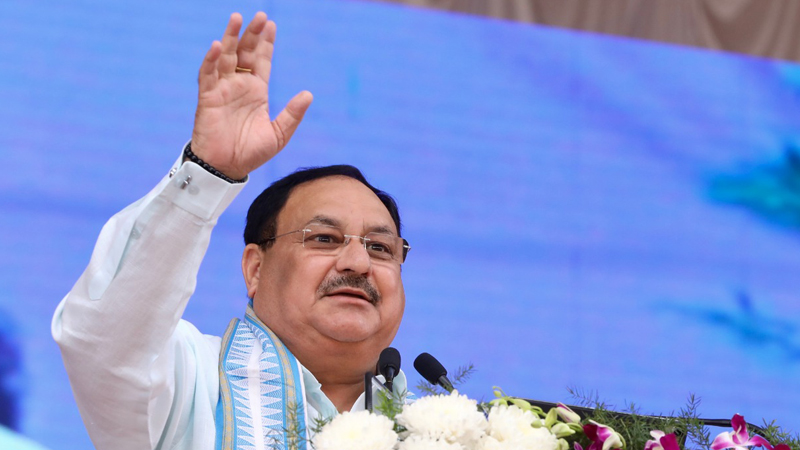 Our Hon’ble Prime Minister Shri Narendra Modi ji is highly committed for the development and growth of Karnataka. Our senior leaders Shri B S Yediyurappa ji and Shri Basavraj Bommai ji have implemented on ground the pro poor and public welfare policies of the Narendra Modi Government. Today Karnataka leads in the innovation index.

All the opposition parties are just bothered about the future of their families and dynasty. They are busy in minting money by indulging in big scams and massive corruption. On the other hand all our senior leaders including Shri B S Yediyurappa and Shri Basavraj Bommai ji are busy serving the people of the state round the clock.

The so called ‘Bharat Jodo Yatra’ of Rahul Gandhi is actually the ‘Bharat Todo Yatra’. Rahul Gandhi is seeking penance through his Yatra because his ancestors never missed a chance to break India.

It is the great people of our country and the Jan Sangh and the Bharatiya Janata Party who worked hard to unite the country. Today our Hon’ble Prime Minister Shri Narendra Modi ji is cementing the bond between the citizens and uniting the country. For us our party is one big family, but for the Opposition parties their families has become the party.

Is Rahul Gandhi unaware of the fact that his great grandfather implemented the Article 370 to separate Jammu and Kashmir from our country? This is the same Rahul Gandhi who had openly supported anti India forces who had shouted slogans against our country in JNU. Such people will unite the country or break it?

During his ‘Bharat Jodo Yatra’, Rahul Gandhi is roaming around with people who does not believe in national integration, unity of our country and our rich cultural heritage. They are in the streets not to unite the country, but to break it.

Under the leadership of our respected Prime Minister Shri Narendra Modi ji India is leaving its indelible mark on the global arena. This year India is holding the Presidentship of G-20. In this connection around 200 meetings will be held at 56 places across the country including Bangalore where top dignitaries from across the world will take part.

As the Bharatiya Janata Party workers it is our responsibility that all the dignitaries who will be visiting Karnataka to take part in the G-20 meetings should be welcomed as per our tradition of ‘Atithi Devo Bhava’.

The Congress is not aware what progress and development mean. It only knows how to grab power, how to fleece people and loot public money by indulging in scams and take commission. This is the history of the Congress party in Karnataka.

The Jan Sangh and the Bharatiya Janata Party have always played a major role in the national integration and led from the front in keeping our unity intact. The sterling examples of it are scrapping of Article 370 from our Constitution which led to the unification of Jammu and Kashmir with India in the real sense, the supreme sacrifice of Hon’ble Dr Shyama Prasad Mukherjee ji for Jammu and Kashmir, Goa Mukti Andolan, hoisting of the National Flag at Lal Chowk in Srinagar.

The Congress party leader Siddaramaiah cannot tell what he has done for the growth and development of Karnataka because he is least bothered about the progress and prosperity of the state. He has just divided people of the state. Similar is the story of DK Shivakumar as every day we hear his new cases of corruption.