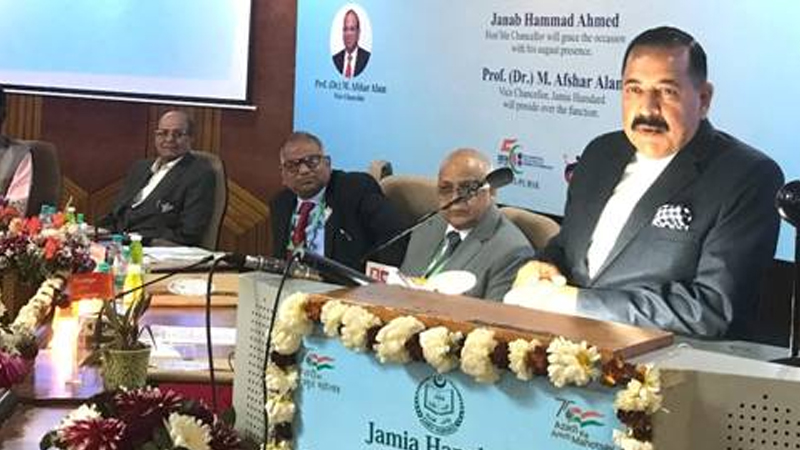 Union Minister of State (Independent Charge) Science & Technology; Minister of State (Independent Charge) Earth Sciences; MoS PMO, Personnel, Public Grievances, Pensions, Atomic Energy and Space, Dr Jitendra Singh said the Pandemic has taught us the virtues of holistic healthcare and even after the pandemic has passed, it will be in the interest of mankind and ailing humanity to institutionalise integrated medicinal approach for adequate treatment and prevention of various diseases.

Speaking at the Jamia Hamdard University here, after inaugurating the world’s latest state-of-art Transmission Electron Microscopy facility funded by the Union Ministry of Science & Technology, the Minister said that during the COVID even the West started looking up to India in search of immunity building techniques drawn from Ayurveda, Homoeopathy, Unani, Yoga, Naturopathy and other oriental alternatives. He said, however, even after the COVID phase passes out, an optimum integration and synergism of different streams of medical management are the key to successful management of various diseases and disorders which may not be otherwise completely amenable to treatment by any single stream of medicine or the treatment given in silos.

Dr Jitendra Singh said that ever since Narendra Modi took over as Prime Minister of India in 2014, he has brought to the centre stage the virtues of indigenous systems of medical management. He said, it was PM Modi, who brought a unanimous resolution in the United Nations to observe International Day of Yoga, as a result of which Yoga has reached virtually every household across the world. He said, it was again Prime Minister Modi, who created a separate Ministry of AYUSH, considering the importance of indigenous medical management system. Also, it was the Modi Govt which started MD in Unani Medicine at Srinagar.

Dr Jitendra Singh inaugurated the world’s latest state-of-art Transmission Electron Microscopy facility in Hamdard University funded by the Union Ministry of Science & Technology. He informed that DST has been supporting Jamia Hamdard in the form of research grants and fellowships to faculty and research scholars. Jamia Hamdard has been receiving DST-PURSE (Promotion University Research and Scientific & Excellence), DST-FIST (Fund for Improvement of S&T Infrastructure in Universities and Higher Educational Institutions, DST-CSRI (Cognitive Science Research Initiative) and others. Referring to this year’s theme “Integrated approach in science and technology for sustainable future”, the Minister called for streamlining of all healthcare practices and strategies to achieve optimum outcome in the field of healthcare.

Dr. Jitendra Singh said that New India will become AtmaNirbhar in health care only by integrating various sciences and domains of medicine. He Said, efforts must be made to integrate all medicine systems under one roof so that a patient with a single card can consult all medical consultants pertaining to his/her disease. He also outlined the various efforts that the government is taking including the Digital Health Mission.

Dr Jitendra Singh said, the Hakeems of Unani System and Vaidya of Ayurveda System have provided affordable and effective treatments to huge number of diseases, especially chronic diseases. He said, both system of medicines are still attracting a large number of patients seeking therapeutic interventions and the Government of India has strengthened these systems under the Department of AYUSH providing resources and regulatory compliance support. He said, the Hamdard Laboratories established by Hakeem Sahib churns out a large number of Unani Formulations manufactured following the Good Manufacturing Practices and some Hamdard products, need no mention, are being used by almost every household in India and also has the global presence.

Dr Jitendra Singh said, since its inception in 1989, Jamia Hamdard’s progress has been stupendous and its Pharmacy School has been ranked the top Institution in the country as per the National Institutional Framework (NIRF) Rankings, conducted by the Ministry of Education, consecutively for last three rankings. The Minister congratulated the leadership, faculty and students of the institution for their efforts which have brought their institution to such heights. Referring to Jamia Hamdard initiated many “Research Promotion Schemes”, Dr Jitendra Singh urged the faculty members to publish high quality research which bring name and fame not only to Jamia Hamdard but also to our country.

Jamia Hamdard (a Deemed to be University) is one of the prestigious seats of learning in the field of pharmaceutical, life sciences, medical, nursing, paramedical, engineering, management and allied health education. It was granted the status of ‘Deemed to be University’ in 1989 by the Ministry of HRD, Government of India, under Section 3 of UGC Act 1956. Started with less than a thousand students. Currently, there are about 10,000 students enrolled in Jamia Hamdard which includes about 600 Ph.D. scholars. I am happy to note that it has been accredited by the National Assessment and Accreditation Council (NAAC) in ‘A’ grade in three consecutive cycles. It has also been recommended by the Empowered Committee of Government of India for the status of ‘Institution of Eminence’.

The Founder of the university Hakeem Abdul Hameed Ji was a renowned physician of Indian system of medicine (Unani) of the 20th century and has a record of providing his healing touch to over 3 million of people who had faith and confidence in Unani medicine practice during his Unani practice of over 75 years. For his immense contribution in the field of education and healthcare, he was conferred with the country’s important civilian awards, such as, Padmashri and Padam Bhushan by the Bharat Sarkar besides many other national and international awards and honours.