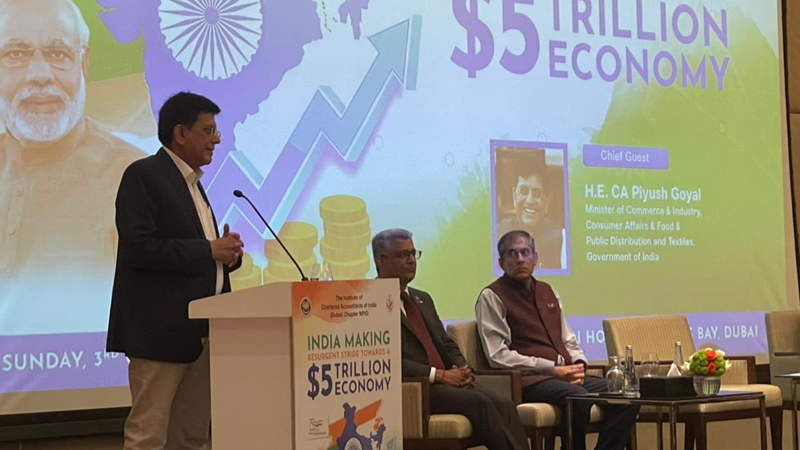 Union Minister of Commerce & Industry, Consumer Affairs, Food & Public Distribution and Textiles, Shri Piyush Goyal has called upon the NRIs and Indian diaspora to invest in India unhesitatingly.  Addressing the Indian People’s Forum (IPF) Business Conclave in Dubai today, Shri Goyal said this is the right time for India’s vast expatriate community to invest in their motherland. There is a great  opportunity in extraordinary growth in India.

“Under Prime Minister Modi we are seeing rise in economic indicators despite the pandemic. Merchandise exports in Apr-Sep’21 touched $197.11 bn, recording 23.8% growth over Apr-Sep’19. Manufacturing PMI average improved to 53.8 (Q2) from 51.5 (Q1) while GST collections have hit a 5-month high in September,” he said.

“From red-tapism to laying the red carpet for businesses, India under Prime Minister Modi has come a long way. As a result, India climbed up in Ease of Doing Business ranking from 130 to 63 in just 5 years and also jumped to 46th spot on the Global Innovation Index (GII), a jump of 35 places in last 6 years. Steps in last 7 years helped us nurture world’s 3rd largest startup ecosystem,” said Shri Goyal.

Shri Goyal said the visionary leadership of our Prime Minister has catapulted our nation to a higher pedestal in the international community.

“Our ancient wisdom Vasudhaiva Kutumbakam & Sarve Santu Niramaya inspired us to serve the world selflessly and we supplied medicines and vaccines to world,” he said, adding, “I urge you to spread this message and help strengthen our global ties.. Hope the Indian diaspora to contribute in the best possible manner to take Prime Minister Modiji’s great work forward & make the country ‘Vishwaguru’ again.”

Stating that India and the UAE are going to celebrate the 50th anniversary of establishment of diplomatic relationship next year, Shri Goyal said this is a good opportunity to take our ties to the next level.

“We are celebrating ‘Azadi Ka Amrut Mahotsav” to commemorate 75 years of Progressive India & to highlight its glorious history, culture & heritage. Coincidentally, UAE is also celebrating this year as the ‘Year of 50’ to  commemorate the declaration of the Union in 1971. ‘Projects of the 50’ of UAE & Prime Minister’s vision of ‘Aatmanirbhar Bharat’ reflect the statesmanship of our leaders,” he said, adding, “India is focusing on fulfilling its aspirations in next 25 years to celebrate the Centenary of its Independence in a grand way, while UAE leadership is planning their journey for the next 50 years.”

Expressing delight at meeting the Indian community in Dubai, “the City of Gold”, Shri Goyal said, “It is because of you all Dubai is considered as an extended neighbourhood of India, – a 2nd home to our exporters and a prime destination for Indian tourists.”

Shri Goyal underlined that the 3.4 million strong Indian diaspora in the UAE acts as a bridge between the two countries.

“I commend the efforts of Indian People’s Forum (IPF) in connecting the people of Indian origin residing in the region & bringing them on a single platform. By spreading our culture, tradition & values on a far-off foreign land, you are not just NRIs but “cultural ambassadors” of our country,” he said.

Shri Goyal is in the UAE to inaugurate the India Pavilion at Dubai Expo. The official visit is being seen as major step towards boosting Indo – UAE Strategic Partnership and taking trade and investment between to unprecedented levels. The ongoing Expo is India’s window to the world, An opportunity to showcase India’s capability & potential.