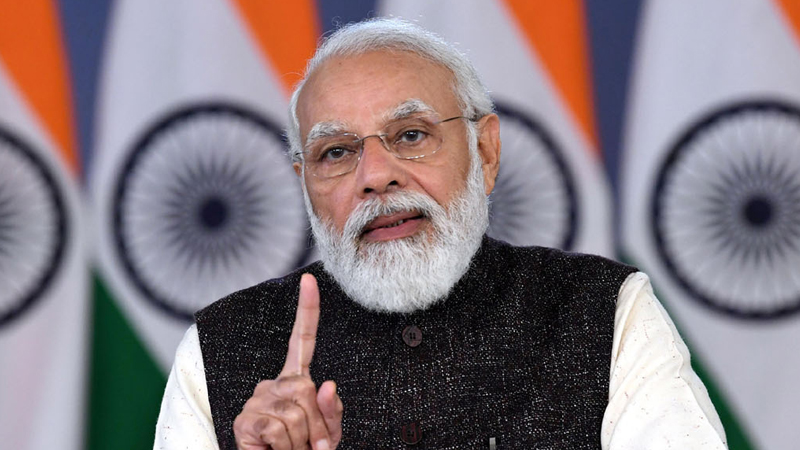 Addressing the gathering, the Prime Minister said Gurdwara Lakhpat Sahib has been a witness to every flow of time. He said he was reminded of how Lakhpat Sahib has seen upheavals in the past. He recalled that once upon a time this place was a major centre for trade to go to other countries. The Prime Minister noted that after the 2001 earthquake, he had the privilege of serving this holy place by Guru’s grace. He recalled that then artisans from different parts of the country restored the original glory of this place. He said Guruvani was inscribed on the walls here using the ancient writing style. This project was also honoured by UNESCO then.

The Prime Minister said that by the grace of great Guru Sahib’s the government got to be in a position to celebrate auspicious occasions like 350 years of Prakash Purab of Guru Gobind Singh Ji and 550 years of Prakash Purab of Guru Nanak Dev ji. In recent years, the Prime Minister said,  efforts were made at every level for the message of Guru Nanak Dev ji to reach the whole world with new energy. The Kartarpur Sahib Corridor, which was awaited for decades, was completed in 2019 by the government. Currently, 400 years of Prakash Utsav of Guru Teg Bahadur ji are being celebrated.

The Prime Minister said, of late, we have been successful in bringing the ‘Swaroop’ of the revered Guru Granth Sahib from Afghanistan to India. What can be a greater experience of Guru’s grace than this, the Prime Minister exclaimed. He added that when he went to America a few months ago, America returned more than 150 historical objects to India there. He said there is also a peshkabz or small sword, on which the name of Guru Hargobind ji is written in Persian. “It is the great fortune of this government to be able to do all this”, the Prime Minister said.

The Prime Minister remarked that it has always been a matter of pride for Gujarat that the fourth Gursikh, of the Panch Pyare, Bhai Mokham Singh ji, was from Gujarat, who played an important role in the establishment of the Khalsa Panth. Gurudwara Bet Dwarka Bhai Mohkam Singh has been built in his memory in Devbhoomi Dwarka.

The Prime Minister respectfully recalled the contribution of the great Guru Tradition to Indian society in the times of subjugation and attacks by the invaders. He said Guru Nanak Dev ji came with a message of brotherhood when society was ridden with obscurantism and divisions. Similarly, Guru Arjan Dev Ji, through integrating the voice of the saints of the entire country brought a sense of unity to the nation. Guru Harkishan ji showed the path of service of humanity which still guides Sikhs and rest of humanity. The Prime Minister noted that Guru Nanak Dev ji and after him our different gurus not only kept the consciousness of India ignited, but also made a way to keep India safe. The contribution of our Gurus is not limited to society and spirituality only. Rather, if our nation, the contemplation of the nation, the faith and integrity of the nation is safe today, then at its core is the great ‘tapasya’ of the Sikh Gurus. Guru Nanak Dev Ji, said the Prime Minister, was clear in his understanding of the danger that Babar’s invasion posed for India.

Similarly Guru Teg Bahadur’s entire life is an example of ‘Nation FIrst’, the Prime Minister emphasised. The Prime Minister said just as Guru Tegh Bahadur ji always stood firm for his concern for humanity, he gives us the vision of the soul of India. The way the country gave him the title of ‘Hind ki Chadar’, shows the attachment of every Indian towards the Sikh tradition. He added that Guru Tegh Bahadur’s valor and his sacrifice against Aurangzeb teaches us how the country fights against terror and religious fanaticism. Similarly, the life of the tenth Guru, Guru Gobind Singh Sahib is also a living example of tenacity and sacrifice at every step, he said.

The Prime Minister lauded that the valour with which our Sikh brothers and sisters fought for the country’s independence even under British rule, our freedom struggle and land of Jallianwala Bagh bear witness to those sacrifices. This tradition, the Prime Minister said, is still alive and becomes all the more important in these times of ‘Amrit Mahotsav’ when we are remembering and taking inspiration from our past.