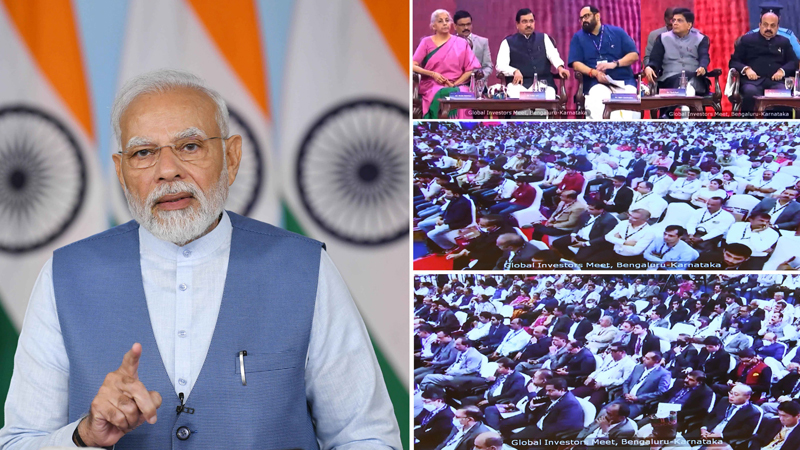 Addressing the gathering, the Prime Minister greeted the people of Karnataka for their Rajyotsava, which was observed yesterday. The Prime Minister remarked that Karnataka is an amalgamation of tradition and technology, nature and culture, wonderful architecture and vibrant startups. “Brand Bengaluru comes foremost to the mind when it comes to talent or technology. This name is well established not only in India but the entire world”, Shri Modi said.

The Prime Minister expressed delight at the organisation of the investors’ meeting in Karnataka and remarked that it is a perfect example of competitive and cooperative federalism. He noted that manufacturing and production are majorly dependent on the policies and control of the state government. “Through this Global Investors’ Meet, states can target specific sectors and forge a partnership with other countries”, he added and expressed happiness that thousands of crores of partnerships are planned at this meet which will result in boosting employment for the youth of the nation.

The Prime Minister said that in the 21st century, from its current position, India has only to move forward. India received a record foreign investment of 84 billion dollars last year. Referring to the sense of global optimism towards India, the Prime Minister said, “These are uncertain times, still most of the nations are convinced about the fundamentals of the Indian Economy. In this period of fragmentation, India is moving with the world and giving emphasis on working with the world. India could assure the world about the supply of medicines and vaccines in the period of the disrupted supply chain, he said. Despite a climate of market saturation, our domestic markets are strong due to the aspirations of our citizens. The Prime Minister highlighted that even in times of a global crisis, experts, analysts and economists have hailed India as a bright spot. “We are continuously working towards cementing our fundamentals to further strengthen India’s economy with each passing day”, Shri Modi said. The Prime Minister stressed the need to understand the trajectory of the Indian economy. He explained the change of approach from 9-10 years ago when the country was grappling with policy and implementation-related issues. He underlined that “instead of trapping the investors in the red tape, we created an environment of the red carpet for investment, and instead of making new complicated laws, we rationalised them.”

The Prime Minister said “Building a New India is possible only with bold reforms, massive infrastructure and the best of talent. Today bold reforms are carried out in every sphere of the government.” He mentioned GST, IBC, Banking reforms, UPI, abolition of 1500 outdated laws and 40 thousand unnecessary compliances. He also said that steps like decriminalisation of many company law provisions, faceless assessment, new avenues for FDI, liberalisation of drone rules, geospatial and space sector and defence sector are bringing unprecedented energy. The Prime Minister said that the number of operational airports has doubled in the last 8 years and Metro has expanded in more than 20 cities.

Highlighting the aim of the PM-GatiShakti National Master Plan, the Prime Minister remarked that it is aimed at integrated infrastructure development. He explained that a road map is prepared not just for developing infrastructure but also for existing infrastructure while the most efficient route is discussed in implementing the plan. Shri Modi stressed the emphasis on last-mile connectivity and ways to improve the product or service by making it world-class. The Prime Minister highlighted the strides made by the youth in this journey and said every sector in India is being propelled by the energy of Youth Power.

The Prime Minister emphasised “Goals of development can be achieved only by focusing on investment and human capital. Moving forward on this thinking, we promoted investments in the Health and Education sector. Our aim is also to increase productivity as well as to improve Human Capital.” The Prime Minister elaborated by mentioning simultaneous push on things like manufacturing incentives along with health assurance schemes; ease of doing business as well as health and wellness centres; highways network as well as provision of toilets and clean drinking water; futuristic infrastructure as well as smart schools. On the environment-friendly growth of the country, the Prime Minister said “Our initiatives towards green growth and sustainable energy have attracted more and more investors. Those who want to return their cost and also want to fulfil their responsibility towards this earth, they are looking towards India with hope.”

Reflecting on the power of the double-engine government in Karnataka, the Prime Minister said that it is one of the reasons for the faster development of many sectors in the state. Giving examples, the Prime Minister stated that Karnataka continues to maintain its place among the top rankers in the Ease of Doing Business and credited this to its inclusion in the list of top states in terms of FDI. He underlined, “400 of the Fortune 500 companies are here and out of 100 plus unicorns of India, more than 40 are in Karnataka” he added. The Prime Minister mentioned that Karnataka is being counted as the largest technology cluster in the world today which is home to industry, information technology, fintech, biotech, startups as well as sustainable energy. “A new story of development is being written in every field”, he continued. He further added that several development parameters of Karnataka are challenging not only other states of India but also some countries. Highlighting that India is entering a new phase of the manufacturing domain, the Prime Minister mentioned the National Semiconductor Mission and pointed out that the tech ecosystem here will take chip design and manufacturing to new heights.

Drawing an analogy between the vision of India with that of an investor, the Prime Minister pointed out that as an investor moves forward with a medium and long-term vision, India also has an inspirational long-term. He gave examples of nano urea, hydrogen energy, green ammonia, coal gasification and space satellites and underlined that today India is moving ahead with the mantra of development of the world. “This is the Amrit Kaal of India, and in the Azadi Ka Amrit Mahotsav, the people of the country are taking a pledge to build a new India.”, he remarked. The Prime Minister concluded his address by stating that India has set a target of becoming a developed nation by 2047 and for it is very important that the investment and India’s inspiration should come together as the development of inclusive, democratic and strong India will accelerate the development of the world. “Investing in India means investing in inclusion, investing in Democracy, investing for the world, and investing for a better, cleaner and a safer planet”, the Prime Minister concluded.

The meeting aims to attract prospective investors and set up a development plan for the next decade. The three-day programme, being held from 2nd to 4th November in Bengaluru would witness more than 80 speaker sessions. The speakers include some of the top industry leaders such as Kumar Mangalam Birla, Sajjan Jindal and Vikram Kirloskar among others. Along with this, a number of business exhibitions with more than three hundred exhibitors and country sessions would run parallelly. The country sessions would each be hosted by the partner countries – France, Germany, Netherlands, South Korea, Japan, and Australia – which would be bringing in high-level ministerial and industrial delegations from their respective countries. The global scale of the event will give Karnataka an opportunity to showcase its culture to the world as well.