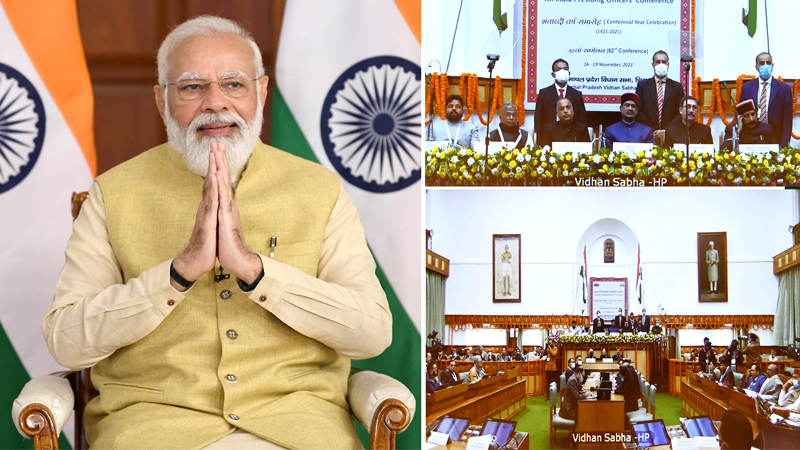 Addressing the gathering, the Prime Minister said democracy is not just a system for India. Democracy is ingrained in our nature and part of life in India. He stressed that “we have to take the country to newer heights, achieve extraordinary goals in the years to come. These resolutions will be fulfilled only by ‘Sabka Prayas’’. And in democracy, in the federal system of India, when we talk about ‘Sabka Prayas’, then the role of all the states is a big basis for that”. Continuing with the importance of ‘Sabka Prayas’, the Prime Minister said whether it is solutions to the decade old problems of the Northeast or completion of all the big projects of development that have been stuck for decades, many such works in the country have been done in the past years, it has been done by everyone’s efforts. He also cited the fight against Corona pandemic as a great example of ‘Sabka Prayas’.

The Prime Minister insisted that the traditions and systems of the Houses of our legislatures should be inherently Indian. He called for policies and laws of the Government to strengthen the Indian emotion of ‘Ek Bharat Shreshtha Bharat’ . “Most importantly, our own conduct in the house should be according to Indian values. It is the responsibility of all of us”, he added.

The Prime Minister proposed whether separate time for Quality Debates could be demarcated. He said such a debate in which traditions of  dignity and seriousness are scrupulously followed. With no one making political slurs on anyone. In a way, it should be the ‘Healthy Time’ of the house, a Healthy Day, he said.

The Prime Minister gave an idea of ​​’One Nation One Legislative Platform’. “A portal that not only gives the necessary technological boost to our parliamentary system, but also works to connect all the democratic units of the country”, the Prime Minister said.

The Prime Minister stressed that the next 25 years are very important for India. In this, he urged the parliamentarians to realize only one mantra – duty, duty, duty…