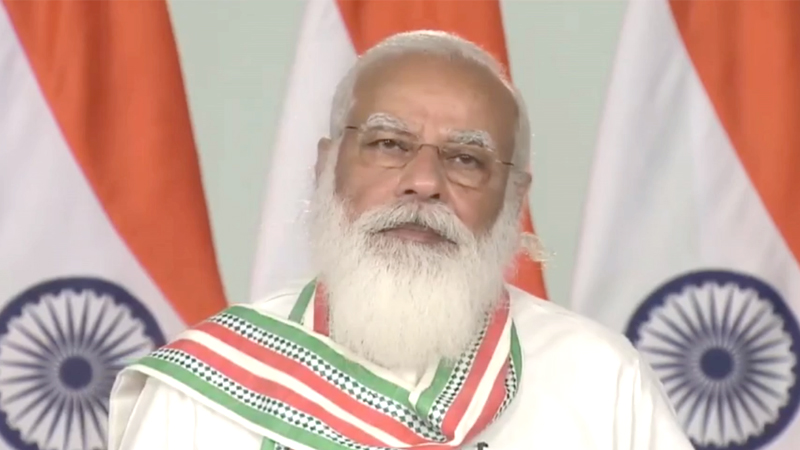 The Members of the National Committee who gave inputs and suggestions to the meeting included Former President Smt. Pratibha Devi Singh Patil, Former Prime Minister Shri H. D. Deve Gowda, Shri Naveen Patnaik, Shri Mallikarjun Kharge Smt. Meira Kumar, Smt. Sumitra Mahajan, Shri J. P. Nadda and Maulana Wahiduddin Khan. The members of the committee thanked the Prime Minister for the planning and organization of the “Azadi ka Amrut Mahotsav”. They gave their suggestions and inputs to further expand the scope of the Mahotsav. The Union Home Minister said that there will be more such meetings in the future and suggestions and inputs received today will be considered.

Addressing the event, the Prime Minister said that the country will celebrate the occasion of 75 years of Independence with grandeur and enthusiasm befitting the historic nature, glory and importance of the occasion. He lauded the new ideas and diverse thoughts coming from the members of the committee. He dedicated the Mahotsav of 75 year of Independence for the people of India.

The Prime Minister said the festival of 75 years of independence should be one such festival, in which the spirit of freedom struggle, tribute to the martyrs and their pledge to create India, could be experienced. He added that this festival should embody the glimpse of the glory of Sanatan Bharat and also the glow of modern India. He said that this festival should reflect the light of the spirituality of the sages and also the talent and strength of our scientists. He said this event will also showcase our achievements of these 75 years to the world and also give a framework for resolution to us for the next 25 years.

The Prime Minister informed that 5 pillars have been decided for the celebration of the 75 years. These are Freedom Struggle, Ideas at 75, Achievements at 75, Actions at 75 and Resolve at 75. All these should include the ideas and feelings of the 130 crore indians.

The Prime Minister also emphasized the need to honour and take the stories of lesser known freedom fighters to people.  He said every nook and corner of the country is replete with the sacrifice of sons and daughters of the country and their stories will be an eternal source of inspiration for the nation. He said we have to bring the contribution of every section to the fore. There are people who are performing some great work for the country for generations, their contribution, thinking and ideas need  to be integrated with the national efforts.

The Prime Minister said this historial festival is about fulfilling the dreams of the freedom fighters, an attempt to elevate India to the height which they had wished. He asserted that the country is achieving things which were unthinkable a few years ago. He said that the celebration will be in accordance with the historical glory of India.