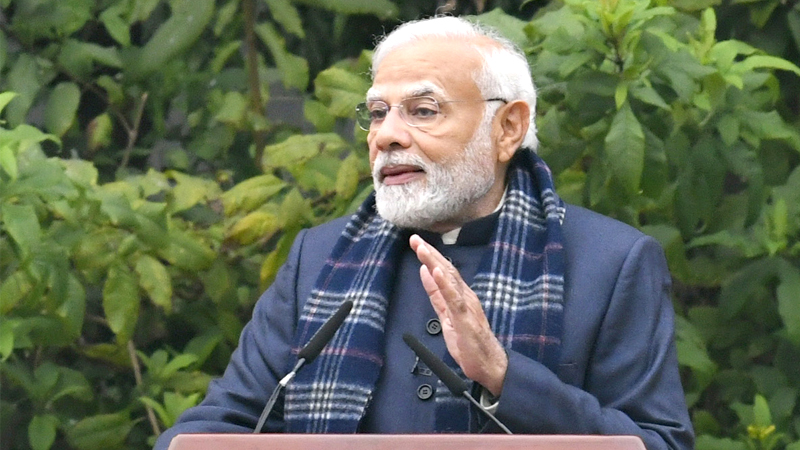 Recalling his interactions with the youth of the country in the past weeks, the Prime Minister noted celebrating Vir Bal Diwas a month ago where the valour and courage of Vir Sahebzades was celebrated all over the country. He also mentioned the National Youth Festival in Karnataka, his interaction with the first batch of Agniveers, young sports players at the Khel Mahakumbh in Uttar Pradesh, children at the Parliament and his residence, and Bal Puraskar Awardees. The Prime Minister also highlighted the Parkisha Pe Charcha interaction with students that is going to take place on 27th January.

The Prime Minister narrated two reasons for the importance of this dialogue with youth. First, because of the energy, freshness, novelty, and passion of youth through which all the positivity keeps inspiring him to work hard day and night. Second, said the Prime Minister, “all of you represent aspirations of dreams in this ‘Amrit Kaal’ and you are going to be the biggest beneficiary of the ‘Viksit Bharat’ and you carry the biggest responsibility of building it.”

The Prime Minister said that it is encouraging to see the increasing role of youth in various dimensions of public life. He recalled the massive participation of youth in the events of Parakram Diwas and other events of Azadi Ka Amrit Mahotsav which is a reflection of the youth’s dreams and dedication to the country.

The Prime Minister noted the contributions of the NCC and NSS volunteers during the corona pandemic and highlighted the efforts of the government in encouraging such organisations. Throwing light on the preparations of the government to make the youth ready for the challenges faced by the border and coastal regions of the country, the Prime Minister informed that special programmes are being run in dozens of districts across the country where special training is imparted with the help of the army, navy and airforce. He noted that this exercise will not only make the youth future-ready but they will also have the capability to act as first responders during the time of need. The Prime Minister also highlighted the vibrant border programme where villages near the country’s borders are being developed. “Efforts are being made to boost the capability of the youth in border areas so that families can return to villages where better opportunities are created for education and employment”, the Prime Minister said.

The Prime Minister told the cadets that in all their successes, the contribution of their parents and families is present and it is ‘Sabka Saath’ Sabka Viswas, Sabka Prayas’ that is responsible for that. “The scope of your success widens when your goals are linked with the goals of the country. The world will see your success as India’s success”, the Prime Minister said. Giving examples of scientists like Dr APJ Abdul Kalam, Homi Jehangir Bhabha and Dr CV Raman, and sports personalities like Major Dhyanchand and others, the Prime Minister said that the entire world considers their milestones and achievements as India’s successes. “The world sees a new future for itself in India’s achievements”, he said. Noting the strength of the spirit of Sabka Prayas, the Prime Minister said that historical successes are those which become the steps of development for the whole of humanity.

The Prime Minister underlined one more uniqueness of the current timeframe, which is the unprecedented opportunities for the youth. He cited campaigns like Startup India, Make In India and Aatmnirbhar Bharat and India’s focus on the future of humanity as new inspirations. He said that the country is at the forefront of AI, Machine learning and other futuristic technologies. He also noted the robust system that is in place for sports and other such activities. “You have to become part of all this. “You have to search the unseen possibilities, explore unseen areas, and find unimagined solutions”, he said.

Noting the goals and resolutions of the future are extremely important for the country, the Prime Minister said that equal emphasis has to be laid on key priority areas of the present. He urged the youth to keep themselves aware of the changes taking place in the country and asked them to participate keenly in the ongoing campaigns. Mentioning the Swachh Bharat Campaign, the Prime Minister said that every youth in the country should take it up as a life mission and suggested working towards keeping their locality, village, towns and cities clean. Similarly, he asked them to read at least one book on freedom fighters during the Amrit Mahotsava. He also asked them to undertake some creative activity like poetry, story or vlogging pertaining to some freedom fighters and ask their schools to hold competitions for these activities. The Prime Minister also suggested the youth take up afforestation work near the Amrit Sarovars that are being built in their districts and also create awareness about maintaining them. He also asked the youth to take part in the Fit India Movement and persuade their family members to participate in it. He touched upon inculcating the culture of Yoga in every home. The Prime Minister also urged the youth to keep themselves updated about the G-20 Summit and engage in active conversation about India’s chairship.

Mentioning the resolution of ‘pride in our heritage’ and ‘freedom from the mentality of slavery’ the Prime Minister highlighted the role of youth in these resolutions. And suggested that in their travels they should include heritage sites.  “You are young, this is time for you to make your future. You are the creator of new thoughts and new standards. You are the trailblazer for New India”, the Prime Minister concluded.