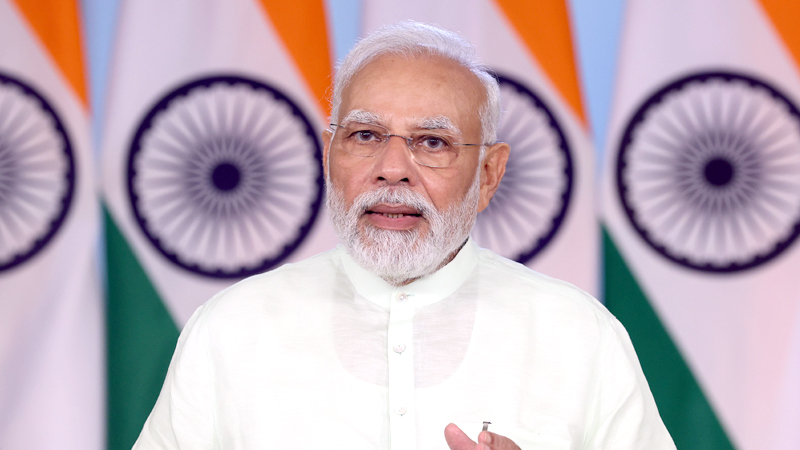 The Prime Minister, Shri Narendra Modi addressed the gathering on the occasion of dedication of  Lata Mangeshkar Chowk in Ayodhya via video message today.

Addressing the gathering, the Prime Minister observed the birthday of the revered and affectionate idol of every Indian, Lata Didi. He also observed the third day of the Navratri festival when Maa Chandraghanta is worshipped. The Prime Minister said that when a seeker goes through rigorous sadhana, he or she experiences and feels the divine voices by the grace of Maa Chandraghanta. “Lata Ji was one such seeker of Maa Saraswati, who stunned the whole world with her divine voice. Lata Ji did sadhana, we all got the boon!”, the Prime Minister remarked. Shri Modi underlined that the huge Veena of Maa Saraswati installed at Lata Mangeshkar Chowk in Ayodhya will become a symbol of musical practice. The Prime Minister further went on to add that the 92 white lotuses made of marble in the flowing waters of the lake in the chowk complex represent the life span of Lata Ji.

The Prime Minister congratulated the Uttar Pradesh government and Ayodhya Development Authority for this innovative effort and offered his heartfelt tributes to Lata Ji on behalf of all the countrymen. “ I pray to Lord Shri Ram that the blessings we got from her life should continue to leave a mark on the coming generations through her melodious songs”, the Prime Minister added.

Looking back at several emotional and affectionate memories related to the birthday of Lata Didi, the Prime Minister said that the familiar sweetness of her voice mesmerized him every time he spoke to her. The Prime Minister recalled, “Didi often used to tell me: ‘Man is not known by age but by deeds, and the more he does for the country, the bigger he is!” Shri Modi continued, “I believe that the Lata Mangeshkar Chowk of Ayodhya and all such memories associated with her will enable us to feel a sense of duty towards the nation.”

Highlighting the re-establishment of Ayodhya’s proud heritage and the new dawn of development in the city, the Prime Minister remarked that Lord Ram is the symbol of our civilization and is the living ideal of our morality, values, dignity and duty. “From Ayodhya to Rameshwaram, Lord Ram is absorbed in every particle of India”, Shri Modi added. The Prime Minister remarked that the entire country is thrilled to see the rapid pace of construction of the temple with the blessing of Lord Ram.

The Prime Minister expressed happiness that the place of development of Lata Mangeshkar Chowk is one of the major connecting sites of various places of cultural importance in Ayodhya. The chowk is located near Ram ki Paidi and is close to the holy stream of Saryu. “What better place to build a chowk named after Lata Didi?”, the Prime Minister exclaimed. Drawing an analogy to the way Ayodhya has held on to Lord Ram after so many aeons, the Prime Minister said that the hymns of Lata Didi have kept our conscience immersed in Lord Ram.

Be it the Manas Mantra ‘Shri Ramchandra Kripalu Bhaj Mann, Haran Bhava Bhaya Darunam’, or be it hymns like ‘Payo Ji Maine Ram Ratan Dhan Payo’ of Meerabai; be it Bapu’s favourite ‘Vaishnav Jan’, or be it sweet melodies like ‘Tum Asha Vishwas Hamare Ram’ that has occupied a place in the minds of the people, the Prime Minister said that many countrymen have experienced Lord Rama through the songs of Lata Ji. “We have experienced the supernatural melody of Lord Ram through the divine voice of Lata Didi”, Shri Modi added.

In concluding his address, the Prime Minister stressed the need to take responsibility to pass on the culture of India to the coming generations while taking pride in the thousand-year-old heritage of India. “Lata didi’s vocals will connect every particle of this country for ages to come”, he added.

Shri Modi also informed that a chowk in Ayodhya will be named after Lata didi and said that it is a fitting tribute to one of the greatest Indian icons.

“Remembering Lata Didi on her birth anniversary. There is so much that I recall…the innumerable interactions in which she would shower so much affection. I am glad that today, a Chowk in Ayodhya will be named after her. It is a fitting tribute to one of the greatest Indian icons.”