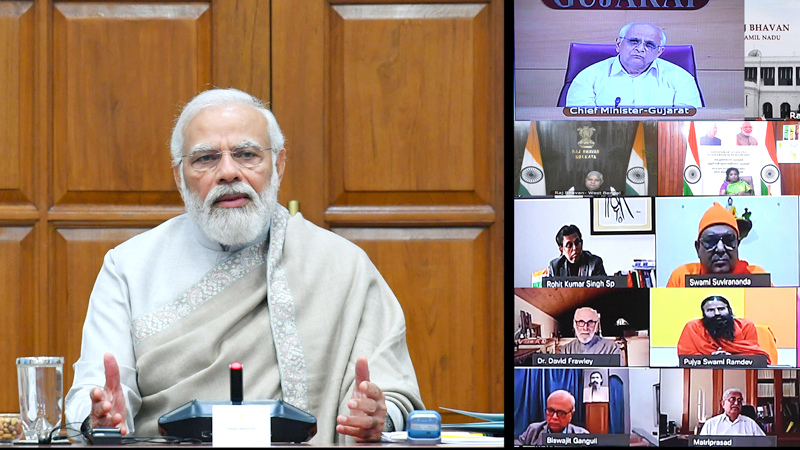 The Prime Minister, Shri Narendra Modi  today chaired the first  meeting of the  High Level Committee (HLC) which has been constituted to commemorate 150th Birth Anniversary of Sri Aurobindo in a befitting manner. The  notification of HLC was issued on 20th December, 2021. The Committee comprises 53 members from various walks of life.

Secretary (Culture), Shri Govind Mohan, gave a presentation on the Road Map for the celebration of the Commemoration and sought the advise of the esteemed members for celebrating 150th Anniversary of Sri Aurobindo in a befitting manner.

Speaking on the occasion, the  Prime Minister expressed his gratitude to the esteemed members for their valuable thoughts and suggestions on Sri Aurobindo’s Commemoration. The Prime Minister said that the two aspects of Sri Aurobindo’s philosophy of ‘Revolution’ and ‘Evolution’, are  of key importance and should be emphasized  as part of the commemoration. The youth should be encouraged towards the concept of greatness as embodied in the philosophy of  Nar to Narayan to create a MahaManav as propounded by Sri Aurobindo, he added.

The Prime Minister  further added that it is the responsibility of India  as a spiritual leader of the world to contribute in terms of spiritualism to nations across the globe. He suggested that 150 universities across the country should be involved in writing papers on different aspects of Sri Aurobindo’s life and philosophy and the 150 papers to be published on the occasion.

The Home Minister profusely thanked the participants for their valuable suggestions and time and closed the meeting.

Today’s meeting of HLC was held in a hybrid mode. 16 distinguished members were  present physically and 22 members participated through Video Conference (VC). The Home Minister Shri Amit Shah  welcomed the distinguished participants. Members gave their suggestions at the meeting. All the members expressed the opinion that the concept of integral education of Sri Aurobindo should be a part of the New Education Policy and should be included  in the curriculum at the college and university levels.