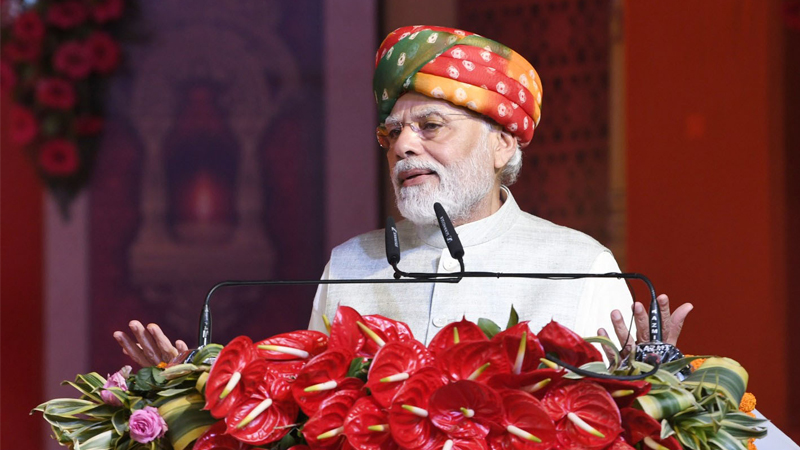 On the eve of Deepavali, the Prime Minister, Shri Narendra Modi initiated the commencement of the grand Deepotsav celebrations in Ayodhya, Uttar Pradesh today. The Prime Minister also witnessed the 3-D Holographic Projection Mapping Show at Ram Ki Paidi on the banks of river Saryu along with the Grand Musical Laser Show.

He said we are the carriers of those traditions and cultures where festivals and celebrations have been a natural part of people’s lives. “There is no match for India when it comes to keeping alive the message of humanity about the victory of every truth and the defeat of every lie”, the Prime Minister remarked. “Deepawali lamps are the living energy of India’s ideals, values and philosophy”, the Prime Minister added, “The illumination and effects of this light is the proclamation of the principle mantra of India –  ‘Satyamev Jayate’.

Quoting the Upanishad the Prime Minister said, “Satyameva Jayate Nanritam Satyen Pantha Vitato Devayanah”, which means victory belongs to the truth, not to the untruth. The Prime Minister also quoted the words of our sages, “Ramo Rajamani Sada Vijayate” which means victory is always for the good conduct of Rama and not for the misconduct of Ravana. Throwing light on the conscious energy in the physical lamp, he said quoting the sages, “Deepo Jyotih Parabrahma Deepo Jyoti Janardana ” which means the light of the lamp is the form of Brahma. Shri Modi reiterated his belief that this spiritual light will guide India’s progress and upliftment.

The Prime Minister took the opportunity to remind everyone of what Goswami Tulsidas had said in the Ramcharit Manas and quoted, “Jagat Prakash Prakashak Ramu”, which means Lord Rama is the giver of light to the whole world and is like a beacon for the entire world. The Prime Minister remarked, “This is the light of kindness and compassion, of humanity and dignity, of equanimity and kindness, and it is the message of Sabka Saath.”

The Prime Minister recited a few lines from his poem ‘Diya’ about a lamp, that he had written in Gujarati many years ago.  He went on to explain the meaning of the poem which meant that the lamp gives hope and heat, fire and rest. Even though everyone worships the rising sun it is the diya that supports the darkest of evenings. He further added that the lamp itself burns to dispel darkness while bringing a sense of dedication into the minds of the people.

The Prime Minister underlined that when we rise above selfishness, then the resolution of all-inclusiveness automatically gets absorbed in it. He said, “When our thoughts are fulfilled, we say that this accomplishment is not for me, it is for the welfare of mankind. From Deep (lamp)  to Deepawali, this is the philosophy of India, this is the thought of India and the eternal culture of India.” The Prime Minister remarked that even though India faced the ill effects of the dark ages in medieval and modern times, the countrymen never stopped lighting the lamps and never ceased to build trust. He recalled that every Indian stood up with a lamp in the same spirit during the difficulties of Corona and the world was a witness to India’s fight against the pandemic. “India came out of every darkness in the past and spread the light of its might on the path of progress” the Prime Minister concluded

The sixth edition of Deepotsav will be the first time when the Prime Minister becomes a part of the celebrations in-person. On the occasion, more than 15 lakh diyas (lamps) will be lit and five animated tableaus and eleven Ramleela tableaus with different dance forms from different states will be showcased.