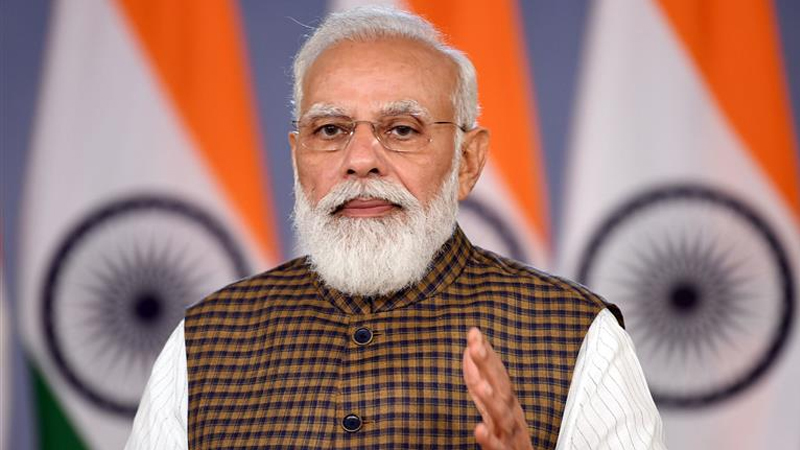 The Prime Minister, Shri Narendra Modi delivered a video message to the joint conference of CVC and CBI today. The Conference is taking place at Kevadia, Gujarat.

The Prime Minister noted that the deliberations of the conference are taking place in Kevadia, a place marked by the presence of Sardar Patel, who gave the highest priority to making governance the basis of India’s progress, public concerns and public welfare. “Today, when India is moving towards attaining its grand goals during the Amrit Kaal. Today when we are committed to strengthening pro-people and proactive governance, your action-oriented diligence will give strength to the ideals of Sardar Saheb”, the Prime Minister told the gathering.

The Prime Minister called upon the officers of CBI and CVC to rededicate themselves to abolish corruption from all walks of national life. He said corruption takes away the rights of people and hinders the pursuit of justice for all, nation’s progress and affects the collective power of the nation.

The Prime Minister emphasized that in the last 6-7 years, the government has succeeded in instilling the confidence that it is possible to contain corruption. He said that there is trust that people can get the benefit of the government schemes without middlemen and bribes. Now people feel that corrupt, howsoever mighty, will not be spared, wherever they go. “Earlier, the way the governments and systems were run, they lacked both political and administrative will. Today there is the political will to attack corruption and continuous improvement is also being carried out at the administrative level” he said. Talking about changed India, Shri Modi pointed out “Today, India of the 21st century, along with modern thinking, emphasizes the use of technology for the benefit of humanity. New India Innovates, Initiates and Implements. New India is no longer ready to accept that corruption is part of the system. It wants its system transparent, process efficient and governance smooth.”

Charting the government’s journey from maximum control and maximum damage to minimum government and maximum governance, the Prime Minister explained how his government undertook the task of reduction of government interference in the lives of the common people in a mission mode by simplifying the government procedures. The Prime Minister explained how the government stressed trust and technology to empower the citizens. He said that this government does not mistrust the citizens and that is why, many layers of verification of documents have been removed and many facilities like birth certificate, life certificate for pension are being delivered through technology without middlemen. Steps like the abolition of interviews in Group C and Group D recruitment, an online and faceless procedure in services ranging from gas cylinder booking to tax filing are reducing occasions for corruption.

The Prime Minister said this approach of trust and technology has strengthened efficient governance and ease of doing business. He remarked that many outdated rules regarding permissions and compliances for the businesses have been removed and, at the same time many strict laws in accordance with present-day challenges have been brought.  He remarked that much more compliance requirements are intended to be removed and said that most of the permissions and compliances have been made faceless and procedures like self-assessment and self-declaration are being encouraged.  GeM, the government e-marketplace has brought transparency in e-tendering. Digital footprints are making investigations easy. Similarly, PM Gati Shakti National Master Plan will remove many difficulties related to decision making. He emphasized that in this march of trust and technology country’s trust in the institutions and officers of CVC, CBI is critical. “We should always keep the motto of nation-first foremost and always judge our work on the touchstone of public welfare and public concern”, he said. He added he will always back such a ‘karamyogi’ whose actions meet these criteria.

The Prime Minister exhorted the officer not to flinch from taking action against the corrupt and ensure that there is no safe haven for anyone who deceives the country and countrymen.  He asked them to remove the fear of the system from the minds of the poorest of the poor. He also called for deliberation regarding technological challenges and cyber fraud.

Recalling his Independence Day call for simplification of laws and procedures, the Prime Minister called upon CVC and CBI and other anti-corruption institutions to remove such processes that come in the way of new India. “You need to strengthen New India’s policy of zero tolerance for corruption. You need to implement laws in a way that poor come close to the system and the corrupt moves out of it”, the Prime Minister concluded.