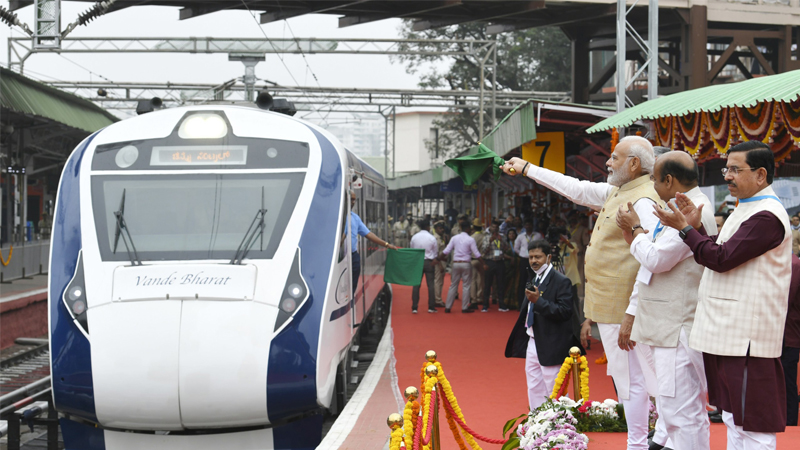 The Prime Minister arrived at the flag-off area on Platform no. 7 of Kranthiveera Sangolli Rayanna (KSR) Railway Station and gave the green signal to Chennai-Mysuru Vande Bharat Express. This will be the fifth Vande Bharat Express train in the country and the first such train in South India. It will enhance connectivity between the industrial hub of Chennai, the Tech & Startup hub of Bengaluru and the famous tourist city of Mysuru.

“The Chennai-Mysuru Vande Bharat Express will boost connectivity as well as commercial activities. It will also enhance ‘Ease of Living.’ Glad to have flagged off this train from Bengaluru.”

This was followed by the Prime Minister arriving at the flag-off area on Platform no. 8 and giving the green signal to the Bharat Gaurav Kashi Yatra train. Karnataka is the first state to take up this train under the Bharat Gaurav scheme in which the Government of Karnataka and the Ministry of Railways are working together to send pilgrims from Karnataka to Kashi. The pilgrims will be provided comfortable stay and guidance for visiting Kashi, Ayodhya and Prayagraj.

“I would like to compliment Karnataka for being the first state to take up the Bharat Gaurav Kashi Yatra train. This train brings Kashi and Karnataka closer. Pilgrims and tourists will be able to visit Kashi, Ayodhya and Prayagraj with ease.”

The Vande Bharat Express 2.0 offers a myriad of superior and aircraft-like travelling experiences. It is equipped with advanced state-of-the-art safety features including an indigenously developed Train Collision Avoidance System – KAVACH. Vande Bharat 2.0 will be equipped with more advancements and improved features such as reaching a speed of 0 to 100 kilometres per hour in just 52 seconds, and a maximum speed of up to 180 kilometres per hour. The improved Vande Bharat Express will weigh 392 tons when compared to the previous version of 430 tons. It will also have a Wi-Fi content on-demand facility. Every coach is equipped with 32” screens providing passenger information and infotainment compared to 24” in the previous version. Vande Bharat Express is also going to be environmentally friendly as the ACs will be 15 per cent more energy efficient. With dust-free clean air cooling of the traction motor, travel will become more comfortable. The side recliner seat facility which was provided only to Executive Class passengers earlier will now be made available for all classes. Executive Coaches have the added feature of 180-degree rotating seats. In the new design of Vande Bharat Express, a photo-catalytic ultraviolet air purification system is installed in the Roof-Mounted Package Unit (RMPU) for air purification.  As recommended by Central Scientific Instruments Organisation (CSIO), Chandigarh, this system is designed and installed on both ends of RMPU to filter and clean the air free from germs, bacteria, viruses etc. coming through fresh air and return air.

Indian Railways launched the operation of the theme-based Bharat Gaurav train in the month of November 2021. The objective of this theme is to showcase India’s rich cultural heritage and magnificent historical places to the people of India and the world, through Bharat Gaurav Trains. This scheme also aims to leverage the core strengths of the professionals of the tourism sector to run theme-based trains to tap the vast tourism potential of India.