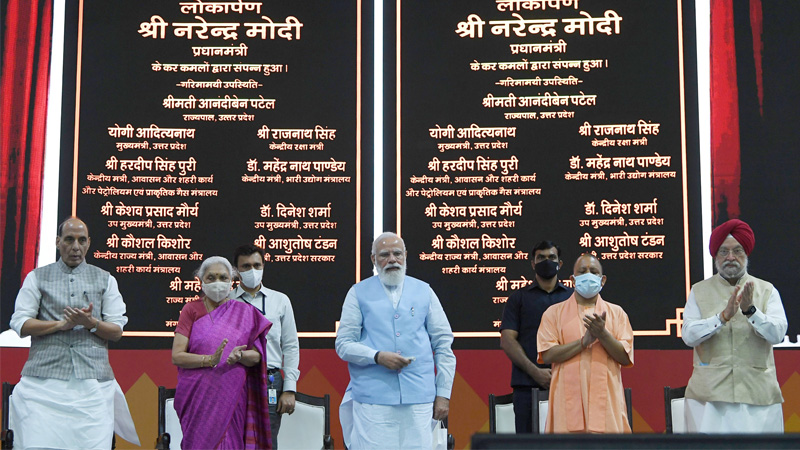 The Prime Minister digitally handed over keys of Pradhan Mantri Awas Yojana – Urban (PMAY-U) houses to 75,000 beneficiaries in 75 districts of Uttar Pradesh and also interacted virtually with beneficiaries of the scheme in Uttar Pradesh. He inaugurated/laid the foundation stone of 75 Urban Development Projects of Uttar Pradesh under Smart Cities Mission and AMRUT; flagged off 75 buses under FAME-II for seven cities including Lucknow, Kanpur, Varanasi, Prayagraj, Gorakhpur, Jhansi and Ghaziabad; and released a Coffee Table Book encompassing 75 projects implemented under various Flagship Missions of Ministry of Housing and Urban Affairs, Government of India. The Prime Minister also announced the setting up of Shri Atal Bihari Vajpayee Chair in Babasaheb Bhimrao Ambedkar University (BBAU), Lucknow.

While interacting with Smt Vimlesh of Agra, the Prime Minister was informed by the beneficiary that she benefitted from PM Awas as well as other schemes for gas cylinder, toilet, electricity, water connection and ration card etc. The Prime Minister asked her to take advantage of government schemes and educate her children, especially her daughters.

Addressing the gathering, the Prime Minister said that the situation where all the properties are in the name of the men of the house needs some correction and as a concrete step, more than 80 per cent of the houses under PM Awas Yojna are being registered in the name of the women or they are the joint owners.

The Prime Minister complimented Lucknow for giving a national visionary like Atal Bihari Vajpayee who was totally dedicated to Mother Bharati. “Today, in his memory, Atal Bihari Vajpayee Chair is being established in Babasaheb Bhimrao Ambedkar University”, he announced.

The Prime Minister stressed the massive increase in the number of houses constructed under PM Awas Yojana as compared to previous numbers. He informed that more than 1.13 crore housing units have been constructed in the cities and, out of this, more than 50 lakh houses have already been built and handed over to the poor. The Prime Minister said that three crore families of urban poor people who lived in slums and did not have a pucca roof have got the opportunity to become millionaires. “Under the Pradhan Mantri Awas Yojana, about 3 crore houses have been built in the country, you can guess the cost of them. These people have become lakhpatis”, Shri Modi said. The Prime Minister pointed out that before the current dispensation in UP, earlier governments dragged their feet on implementing the schemes as more than 18000 houses were approved but not even 18 houses were constructed at that time, the Prime Minister said. He also informed that after the current Government under Yogi Adityanath came to power, more than 9 lakh housing units were handed over to the urban poor and 14 lakh units are under various stages of construction. These houses are equipped with modern amenities.

The Prime Minister emphasized that the government has made a very serious effort to overcome the problems and challenges of the urban middle class. The Real Estate Regulatory Authority (RERA) Act has been such a major step. This law has helped in getting the entire housing sector out of mistrust and fraud and has helped and empowered all stakeholders.

The Prime Minister said Urban bodies are also saving about Rs 1000 crore every year by installing LED street lights. Now this amount, he informed, is being used for other development works. He added that LED has also greatly reduced the electricity bill of the people living in the city.

The Prime Minister said in India in the last 6-7 years there has been a huge transformation in the urban sector due to technology. Technology is the basis of the Integrated Command and Control Centers that are running in more than 70 cities of the country today. “Today, we will have to say ‘Pahle Aap’ – Technology First ”, the Prime Minister quipped, in a city famous for its culture.