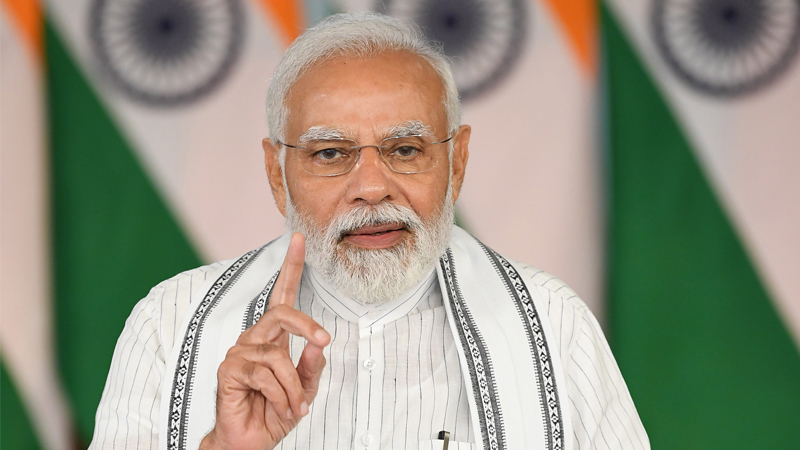 The Prime Minister Shri Narendra Modi inaugurated the hostel and education complex of Shri Annapurnadham Trust at Adalaj, Gujarat today via video conferencing. The Prime Minister also performed the Bhumipujan of Hiramani ArogyaDham of Jansahayak Trust during the event. Chief Minister of Gujarat Shri Bhupendrabhai Patel was among those present on the occasion.

Speaking on the occasion, the Prime Minister expressed happiness on being associated with the divine, spiritual and social enterprises of Shri Annapurnadham for a long time. He said that it has been the nature of Gujarat to contribute in the field of health, education and nutrition. All communities play their part as per their capacity and Patidar community is never left behind in fulfilling their role for the society.

The Prime Minister said that the goddess of prosperity Maa Annapurna is deeply revered by all and specially by the Patidar Community which is deeply connected with the realities of everyday life. The Prime Minister said that the statue of Maa Annapurna was brought back from Canada to Kashi recently. “Dozens of such symbols of our culture, have been brought back from abroad in last few years”, he said.

The Prime Minister said that in our culture, food, health and education is always given great importance and today, Shri Annapurnadham has expanded these elements. The new facilities that are coming up will benefit the common people of Gujarat a great deal specially the facility for dialysis of 14 persons at a time, blood bank with 24-hour blood supply will serve a great need. The Prime Minister said that the central government has started the facility of free dialysis in district hospitals.

In statue of Unity, said the Prime Minister, India has paid a great homage to Sardar Patel, whose name has reached all over the globe.

The Prime Minister, said that in Gujarat, which is land of Maa Annapurna, there should not be any place for malnutrition. He said often malnutrition is also due to ignorance. He stressed the need for spreading awareness about the balanced diet. Terming food as the first step in the direction of health, the Prime Minister said malnutrition is often a result of lack of knowledge about food rather than the lack of food itself. The Prime Minister mentioned the during the pandemic, government ensured free foodgrain for more than 80 crore people. Referring to his talk to the US president last night, Shri Modi said that he told the US President that if WTO rules are relaxed to permit, India can offer foodgrains for sending to other countries. The Prime Minister said that by the grace of Maa Annapoorna Indian farmers are already taking care of the world.

The Prime Minister praised the vaccination campaign in Gujarat. He also reiterated the need to promote skill development as per the needs of latest trends of industrial development. Referring to the initial impetus of creating pharmacy college that led to the state’s preeminent role in pharma industry, he said that efforts of community and government in developing skill have multiplier effect. Gujarat should lead the country in achieving the standards of industry 4.0, as the state has the capability and temperament to do so, he said.

Noting the adverse impact on the finances of the dialysis patients, PM emphasized spreading the facility of free dialysis in all the districts of the country. Similarly, Jan Aushadhi Kendra are reducing the cost for patients by providing affordable medicine.  Measures like,  Swachhta, Poshan, Jan Aushadhi, Dialysis campaign, reduction in stent and knee implant prices have reduced the burden on the common people. Similarly, Ayushman Bharat Scheme have helped the poor and middle class patients, especially the women, the Prime Minister added.

The hostel and education complex have lodging and boarding facility of 150 rooms for 600 Students. Other facilities include training Centre for GPSC, UPSC Exams, e-Library, conference room, provision of Sports Room, TV room and primary health facilities for students etc.

The Jansahayak Trust will develop Hiramani Arogya Dham. It will have the latest medical facilities including a facility for dialysis of 14 persons at a time, blood bank with 24-hour blood supply, medical store working round the clock, modern pathology laboratory and top-class equipment for health check-ups. It will be a Day-Care Centre with advanced facilities for Ayurveda, Homeopathy, Acupuncture, Yoga Therapy etc. It will also host facilities for first aid training, technician training and doctor training.