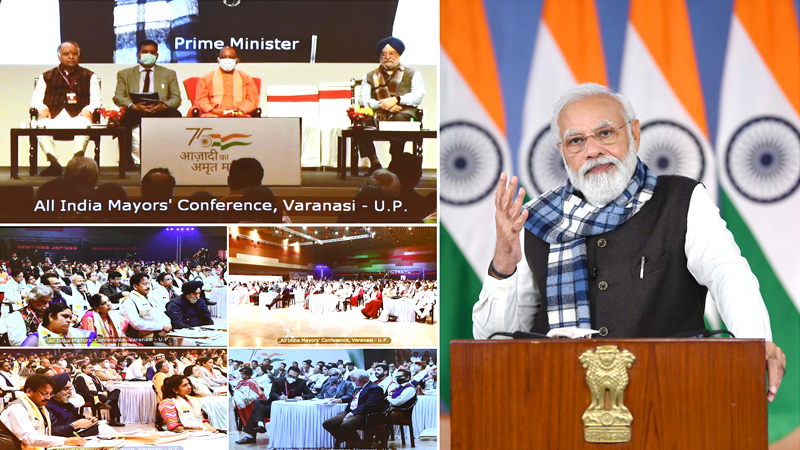 Addressing the gathering, the Prime Minister referred to the recent developments in the ancient city of Varanasi. He recalled his statement that the development of Kashi can be a roadmap for the entire country.  The Prime Minister said most of the cities in our country are traditional cities, developed in a traditional way. In this era of modernization, the antiquity of these cities is equally important. He remarked that these cities can teach us how to preserve heritage and local skills. The Prime Minister insisted that destroying the existing structures is not the way but emphasis should be on rejuvenation and preservation. This should be done in accordance with the requirements of modern times.

The Prime Minister called for healthy competition between the cities for cleanliness and wondered if there can be new categories for recognizing the cities that are making the best efforts to achieve cleanliness along with the best performing cities. He also insisted on the beautification of cities along with cleanliness. He asked the mayor to create a sense of healthy competition between the wards of their cities in this regard.

He also asked the Mayors to run programmes related to ‘Azadi ka Marit Mahotsav’ such as freedom struggle themed ‘rangoli’ competitions, Songs competition on freedom struggle and Lullaby (Lori) competition, which the Prime Minister has been insisting on, in his speeches and Mann ki Baat. The Prime Minister also suggested that the Mayors should find out and celebrate birthdays of the cities and celebrate them. Cities with rivers should celebrate the River Festival (Nadi Utsav). He stressed the need to spread the glory of the rivers so that people take pride in them and keep them clean. “Rivers should be brought back to the centre of city life. This will bring a new life to your cities.” said the Prime Minister. He asked the Mayors to revitalise the campaign against the elimination of single-use plastic. He asked the Mayors to look for ways of creating wealth from waste. “Our city should be clean and healthy too, this should be our effort”, he said

He asked Mayors to ensure that LED bulbs are used widely in the streetlights and homes of their cities. He asked them to take this up in a mission mode. He said we should always think of using existing schemes for new uses and taking them forward. He asked Mayors to get in touch with NCC units of the city and create groups to clean statues of the cities and organise speeches on the personalities in the spirit of ‘Azadi Ka Amrit Mahotsav’. Similarly, Mayors can identify a place in their city and create a monument in sync with the Azadi Ka Amrit Mahotsav through PPP mode. Referring to the ‘One District One Product’ programme, the Prime Minister asked Mayors to push for a unique identity of their cities promoted by some unique product or place in the city. The Prime Minister also asked them to develop people-friendly thinking with regard to various aspects of urban life. He said we need to promote the use of public transport. He asked Mayors to see that every facility in their city is divyang friendly as per Sugamya Bharat Abhiyan- Accessible India Campaign.

He said that “our cities are the driving force of our economy. We should make the city a hub of a vibrant economy”. He asked them to create a holistic system where all facilities develop simultaneously to create an ecosystem that invites and promotes economic activity.

The Prime Minister reiterated the need to strengthen MSMEs in our development model. “Street vendors are part of our own journey, we will see their troubles every moment. For them, we have brought PM Svanidhi Yojana. This plan is very good. Make a list of them in your city and teach them to do mobile phone transactions. This will facilitate bank finance on much better terms”, the Prime Minister said. He said that during the pandemic their importance came out very clearly.

The Prime Minister concluded with a request to Mayors to give suggestions from their experiences for the development of Kashi. “I will be grateful for your suggestions and I will be your first student”. The Prime Minister said Sardar Patel was mayor of Ahmedabad and the country remembers him even today. Post of Mayor can be a stepping stone for a meaningful political career where you can serve the people of this country”,The Prime Minister added.