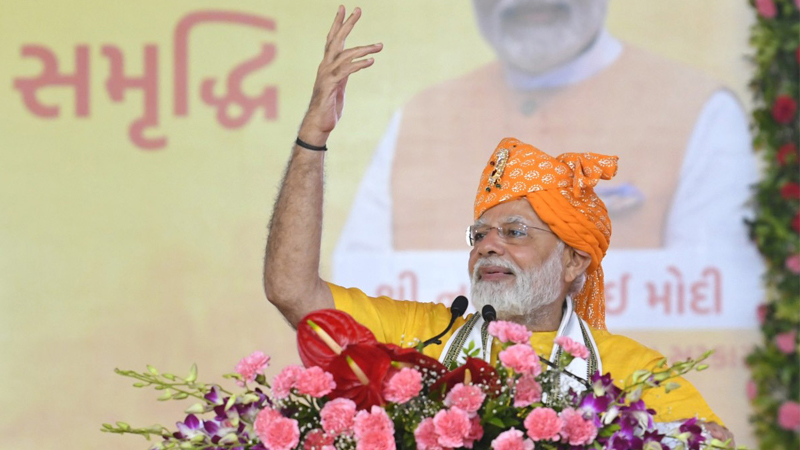 The Prime Minister Shri Narendra Modi today inaugurated and laid the foundation stone of multiple projects worth more than Rs. 1,000 at Sabar Dairy at Gadhoda Chowki, Sabarkantha, Gujarat. These projects will empower local farmers and milk producers and increase their income. This will also give a boost to the rural economy in the region. The Prime Minister felicitated beneficiaries  of Sukanya Samriddhi Scheme and top women milk producers. Chief Minister of Gujarat Shri Bhupendrabhai Patel was among those present on the occasion.

The Prime Minister recalled the situation of deprivation and  drought two decades ago. He recalled how he, as the Chief Minister, enlisted the people’s cooperation and tried to improve the situation in the region. He said cattle rearing and dairy was the key  element of that efforts. He also talked about steps for promoting animal husbandry by providing fodder, medicine and also promoting Ayurvedic treatment for cattle. He mentioned Gujarat Jyotigram Scheme as a catalyst of development.

The Prime Minister noted with pride that due to steps taken in the past two decades the dairy market in Gujarat has reached 1 lakh crore rupees. He recalled his earlier visits in 2007 and 2011 and his request to increase the participation of women. Now most of the committees have good representation of women. Payment for milk is mostly done to women, he said.

He said these experiments are being used in other areas also. Today, the work of formation of 10,000 Farmer Producer Organizations (FPOs) is going on in full swing in the country. Through these FPOs, small farmers will be able to directly connect with the food processing, value linked export and supply chain. The farmers of Gujarat are also going to benefit a lot from it, he said.

He said that the strategy of creating alternative income streams for farmers is bearing fruit. Horticulture, fishery, honey production are giving good income to the farmers. Khadi and Gramodyog turnover has gone over one lakh crore for the first time. More than 1.5 crore new jobs were created in this sector in villages. Measures like increasing ethanol blending in petrol are creating new avenues for the farmers. “Until 2014, less than 400 million litres of ethanol was blended in the country. Today it is reaching around 400 crore litres. Our government has also given Kisan Credit Cards to more than 3 crore farmers by running a special campaign in the last 2 years”, he added.

The Prime Minister said that steps like neem-coating of urea, opening closed fertiliser plants and promoting nano fertilisers and ensuring urea availability at affordable prices despite global price hike have benefited the farmers of the country and that of Gujarat. Sujlam Suflam Scheme has made water available to many tehsils of Sabarkantha district. Similarly, he said that connectivity has been increased at an unprecedented scale in the district and nearby areas. Railway and highway projects have improved the connectivity in the region. This connectivity is helping tourism and in ensuring jobs for the youth, he said.

Reiterating the importance of the Azadi ka Amrit Mahotsav, the Prime Minister recalled the sacrifice of the local tribal leaders. The Prime Minister informed  that the government has declared the birth anniversary of Bhagwan Birsa Munda Ji on 15th November as Janjatiya Gaurav Diwas . “Our government is also building a special museum in the memory of tribal freedom fighters across the country.” He continued, “for the first time, the country’s daughter coming from tribal society has reached the highest constitutional post of India. The country has made Mrs. Draupadi Murmu ji its President. This is a moment of great pride for over 130 crore Indians.”

He requested the people of the country participate enthusiastically in the Har Ghar Tiranga Campaign.

Details of the Projects:

The Prime Minister inaugurated the Powder Plant at Sabar Dairy with a capacity of around 120 metric tonnes per day (MTPD).  The total cost of the entire project is more than Rs. 300 crores. The layout of the plant meets global food safety standards. It is highly energy efficient with almost zero emission. The plant is equipped with the latest and fully automated bulk packing line.

The Prime Minister also inaugurated the Aseptic Milk Packaging Plant at Sabar Dairy. It is a state of the art plant having capacity of 3 Lakh Litre per day. The project has been executed with a total investment of around Rs. 125 crores. The plant has the latest automation system with highly energy efficient and environment friendly technology. The project will help ensure better remuneration to milk producers.

The Prime Minister also laid the foundation stone of the Sabar Cheese & Whey Drying Plant Project. The estimated outlay of the project is around Rs. 600 crores. The Plant will manufacture Cheddar Cheese (20 MTPD), Mozzarella Cheese (10 MTPD) and Processed Cheese (16 MTPD). Whey generated during manufacturing of cheese shall also be dried at Whey Drying Plant, having capacity of 40 MTPD.

Sabar Dairy is a part of Gujarat Cooperative Milk Marketing Federation (GCMMF), which makes and markets a whole range of milk and milk products under the Amul brand.