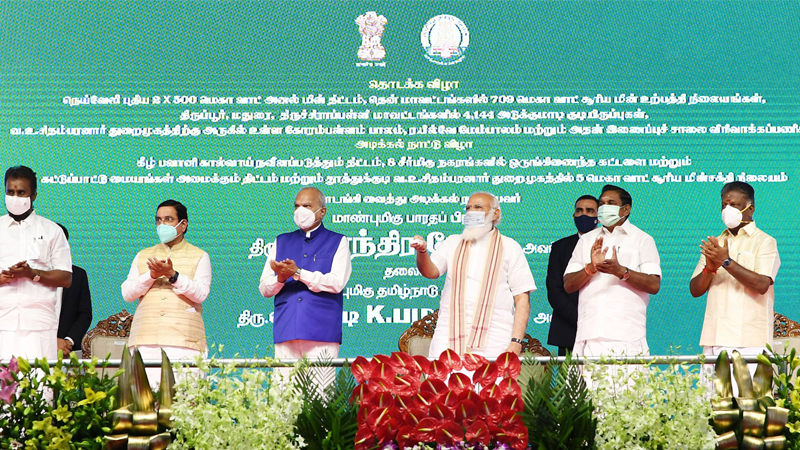 The Prime Minister, Shri Narendra Modi dedicated to the nation the 1000 MW Neyveli New Thermal Power Project and 709 MW Solar Power Project of NLCIL. He laid the foundation stone for design, supply, installation and commissioning of a 5MW grid connected ground based solar power plant at V.O. Chidambaranar Port and for the extension, renovation and modernisation of Lower Bhavani Project System. He also laid the foundation stone for development of Integrated Command and Control Centers (ICCC) in nine Smart Cities including Coimbatore, Madurai, Salem, Thanjavur, Vellore, Tiruchirappalli, Tiruppur, Tirunelveli and Thoothukudi. He inaugurated the 8-laning of Korampallam Bridge and Rail Over Bridge (ROB) at V.O.Chidambaranar Port and the tenements constructed under the Pradhan Mantri Awas Yojana (Urban) scheme. Governor, Chief Minister and Deputy Chief Minister of Tamil Nadu and Union Minister Shri Pralhad Joshi were present on the occasion.

Addressing the event, the Prime Minister said Coimbatore is a city of industry and innovation. Development works launched today  will benefit Coimbatore and the entire Tamil Nadu, he said.

The Prime Minister said that the modernization of Bhawani Sagar Dam will irrigate over 2 lakh acres of land and farmers of several districts will benefit from this project. He lauded Tamil Nadu for making a major contribution towards India’s industrial growth. He expressed happiness to inaugurate several major power projects, as one of the basic needs of industrial growth is continuous power supply. He said that the 709 MW solar power project is indigenously developed and the cost of this project is over Rs 3,000 crore. He further said that another 1,000 MW thermal power project constructed at a cost of Rs 7,800 crore will be hugely beneficial to Tamil Nadu. He added that over 65% of the power generated will be given to Tamil Nadu.

As the Prime Minister launched various projects related to V.O. Chidambaranar Port, Thoothukudi, He said that Tamil Nadu has a glorious history of sea trade and port-led development. The projects launched today will further strengthen the cargo handling capacity of the port and support the green port initiative. He noted that efficient ports contribute to India being Aatmnirbhar and a global hub for trade as well as logistics. Shri Modi paid tribute to the great freedom fighter VOC. “His vision for a vibrant Indian shipping industry and maritime development inspires us greatly,” said the Prime Minister.  He expressed happiness that VOC port has taken up grid-connected 5 MW ground based solar power plant at a cost of Rs 20 crore and installation of 140 KW rooftop solar project is in progress. He called it an example of Urja Aatmnirbharta.

The Prime Minister asserted that the Government of India’s commitment to port-led development can be seen through the Sagarmala Scheme. About 575 projects at a total cost of over six lakh crore rupees have been identified for implementation during the 2015-2035 period. These works cover: Port modernisation, New port development, Port connectivity enhancement, Port-linked industrialisation and Coastal community development, the Prime Minister informed . He informed that a new Multi-Modal Logistics Park is going to be launched soon at Mappedu near Sriperumbudur in Chennai.He further added that the ‘8-laning of Korampallam Bridge and Rail Over Bridge was also taken up under ‘Sagarmala programme’. The Project will facilitate seamless and congestion free transit to and from the Port.It will also further reduce the turnaround time of the cargo trucks, Shri Modi said

Shri Modi said that at the core of development is ensuring dignity to every individual. “One of the basic ways of ensuring dignity is to provide shelter for everyone. To give wings to the dreams and aspirations of our people,  Pradhan Mantri Awas Yojna was started”, he said. He expressed happiness to inaugurate 4,144 tenements built in several areas and to lay the foundation stone to integrated command and control centres in smart cities across Tamil Nadu. He also said that the cost of this project is Rs 332 crore and these houses will be handed over to those who were homeless even after 70 years of Independence. He said the Integrated Command and Control Centres will provide an intelligent and integrated IT solution to manage various services across these cities.