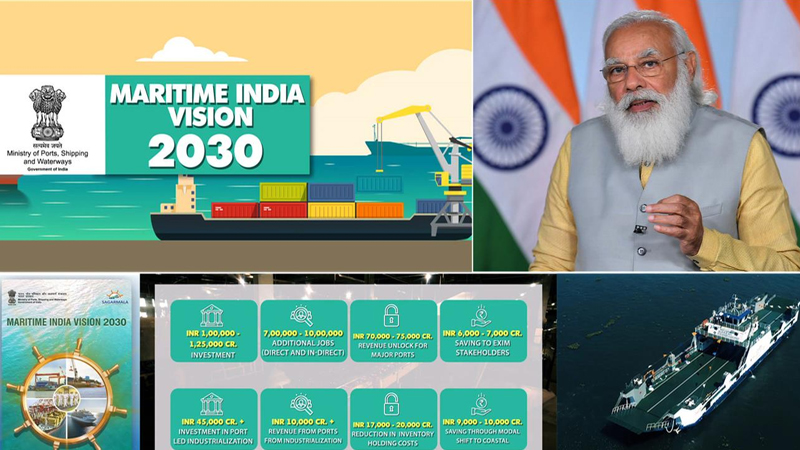 Speaking on the occasion, the Prime Minister invited the world to come to India and be a part of India’s growth trajectory. India is very serious about growing in the maritime sector and emerging as a leading Blue Economy of the world. Through the focus areas of upgradation of infrastructure, boosting reform journey, India aims to strengthen the vision of Aatamnirbhar Bharat,  he said.

He noted that instead of a piecemeal approach focus is on the entire sector as one. He informed that capacity of major ports have increased from 870 million tonnes in 2014 to 1550 million tonnes now.  Indian ports now have measures such as: Direct port Delivery, Direct Port Entry and an upgraded Port Community System (PCS) for easy data flow. Our ports have reduced waiting time for inbound and outbound cargo. He also informed that mega ports with world class infrastructure are being developed in Vadhavan, Paradip and Deendayal Port in Kandla.

The Prime Minister asserted that “Ours is a Government that is investing in waterways in a way that was never seen before. Domestic waterways are found to be cost effective and environment friendly ways of transporting freight. We aim to operationalise 23 waterways by 2030.” He also pointed out that India has as many as 189 lighthouses across its vast coastline. “We have drawn up a programme for developing tourism in the land adjacent to 78 lighthouses. The key objective of this initiative is to enhance development of the existing lighthouses and its surrounding areas into unique maritime tourism landmarks”, Shri Modi informed. He announced that steps are also being taken to introduce urban water transport systems in key states and cities such as Kochi, Mumbai, Gujarat and Goa.

The Prime Minister said that the Government has recently widened the ambit of the maritime sector by renaming the Ministry of Shipping as Ministry of Ports, Shipping and Waterways so that work happens in a holistic manner. The Government of India is also focusing on the domestic ship building and ship repair market. To encourage domestic shipbuilding approval has been given to the Shipbuilding Financial Assistance Policy for Indian Shipyards.

The Prime Minister informed that the Ministry of Port Shipping and Waterways has created a list of 400 investable  projects. These projects have an investment potential of $ 31 billion or Rs 2.25 lakh crores. Talking about the Maritime  India Vision 2030, The Prime Minister said It outlines the priorities of the Government.

The Sagar-Manthan: Mercantile  Marine  Domain Awareness Centre has also been launched today. It is an information system for enhancing maritime  safety, search and rescue capabilities, security and marine environment protection.

The Sagarmala project for promoting port led development was announced by the Government in 2016. As part of the Programme, more than 574 projects at a cost of 82 billion US Dollars or Rs 6 lakh crores have been identified for implementation during 2015 to 2035. Ship repair clusters will be developed along both coasts by 2022. Domestic ship recycling industry will also be promoted to create ‘Wealth from Waste’. India has enacted Recycling of Ships Act, 2019 and agreed to the Hong Kong International Convention.

The Prime Minister expressed the desire  to share our best practices with the world and also the openness to learning  from global best practices. Continuing with India’s focus on trade and economic linkages with the BIMSTEC and IOR nations, India plans to enhance investment in infrastructure and facilitate mutual agreements by 2026, he said.

The Prime Minister concluded with exhortation to the global investors “India’s long coastline awaits you. India’s hardworking people await you. Invest in our ports. Invest in our people. Let India be your preferred trade destination. Let Indian ports be your port of call for trade and commerce.”