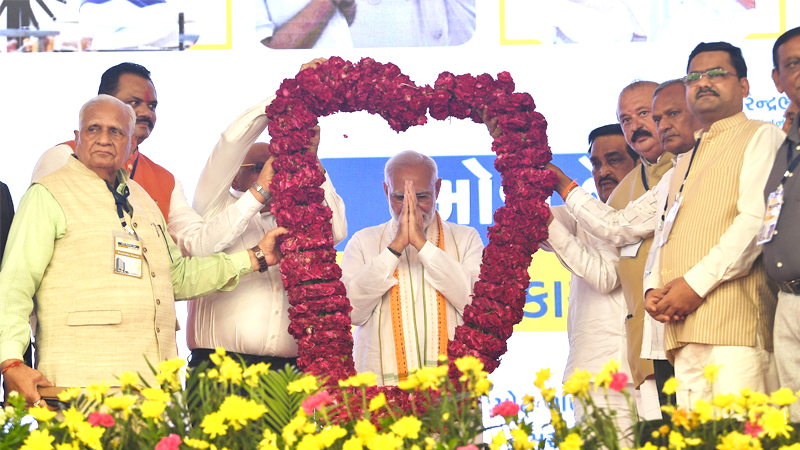 The Prime Minister cut the ribbon to mark the inauguration of the Bhavan. Shri Modi also lit a lamp on the occasion and took a walkthrough of the Bhavan,

Addressing the gathering, the Prime Minister said that he was fortunate to perform darshan and pooja before Maa Modheshwari yesterday. The Prime Minister recalled when General Cariappa narrated an interesting story. He said that wherever General Cariappa went, everybody used to salute him out of respect, but he experienced a different kind of joy and gratification when the people of his village felicitated him during a ceremony. Drawing an analogy to this incident, the Prime Minister thanked one and all for the blessing that his Samaj ushered on his return. The Prime Minister congratulated the members of the Samaj for making this occasion a reality and prioritising education. “It is true that the timeline did not match. But you did not give up the goal and everyone gathered and gave priority to this work”, he added.

Remembering the days when people from his Samaj had meagre opportunities to progress, the Prime Minister remarked,  “today we can see people coming forward in their own way in Samaj.” The Prime Minister pointed out that everyone worked together to set up a system of education, and this collective effort is the strength of the Samaj. “The path is right, and in this way, the welfare of the Samaj can be achieved” Shri Modi added, “As a Samaj, it is a matter of great pride that they tackle their problems, overcome humiliation, yet do not come in anyone’s way.” The Prime Minister expressed happiness that everyone in the Samaj is united and thinking about its future in Kali Yuga.

The Prime Minister expressed his gratitude to his Samaj and said that he has to clear a debt of the Samaj. He further added that the son of this Samaj may have been the Chief Minister of Gujarat for a long time, and has now become the Prime Minister of the country for the second time, but even in the midst of the responsibilities of his long rule, not a single person from this Samaj came to him with personal work. Shri Modi pointed out the sanskar of the Samaj and saluted them wholeheartedly with respect.

Concluding the address, the Prime Minister remarked that labour also has tremendous power, and a large section of our Samaj belongs to the hard-working class. “Be proud of them”, he said. The Prime Minister expressed pride that the members have never allowed the Samaj to suffer nor did anything wrong with any other Samaj. “It will be our endeavour, I am sure that the coming generation will progress with great pride”, Shri Modi concluded.