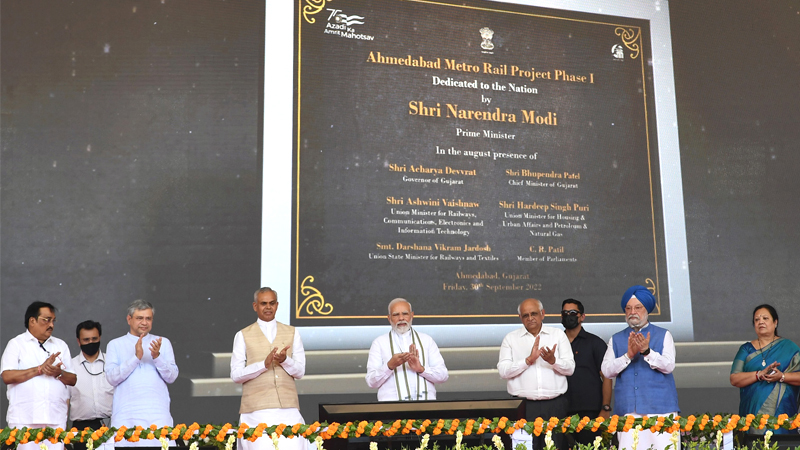 Addressing the gathering, the Prime Minister said that today is a big day for India of 21st century, urban connectivity and Aatmnirbhar Bharat. He expressed his delight in the ride that he undertook in Vande Bharat Train and Ahmedabad Metro.

The Prime Minister praised the sound-proofing inside the Vande Bharat Express where the sound was reduced to a hundredth when compared to what is experienced inside an airline. On a personal note, the Prime Minister thanked the people of Ahmedabad for a huge turnout and in a light-hearted manner, recounted the wisdom and calculation of Ahmedabad commuters. “I can not salute Ahmedabad enough, today, Ahmedabad has won my heart”, a visibly moved Prime Minister said.

The Prime Minister remarked that India of the 21st century is going to get new momentum from the cities of the country. “With the changing times, it is necessary to continuously modernise our cities with the changing needs”, Shri Modi  said. He pointed out that the system of transport in the city should be modern and should have seamless connectivity where one mode of transport supports the other. In pursuant to this thinking huge investment is being made in the urban infrastructure. In the last 8 years, in more than two dozen cities either Metro has started or work is in an advanced stage. Dozens of smaller cities have been connected via air connectivity and UDAN scheme.  Similarly, Railways stations are undergoing transformation. “Today, Gandhinagar Railway Station is no less than any airport in the world”, he said. He also mentioned the government’s decision to modernise Ahmedabad Railway Station.

Citing the success of Ahmedabad-Gandhinagar, the Prime Minister elaborated on the success of twin-city development concept. He said that many twin cities like Anand-Nadiad, Bharuch Ankaleshwar, Valsad and Vapi, Surat and Navsari, Vadodara – Halol Kalol, Morvi-Wankaner and Mehsana Kadi are going to further strengthen Gujarat’s identity.

Shri Modi underlined the role of cities like Ahmedabad, Surat, Vadodara, Bhopal, Indore, Jaipur in ensuring the developed status in the coming 25 years. The Prime Minister highlighted that along with the focus on improving and expanding old cities, new cities are being developed according to the demands of global businesses. “GIFT Cities are also a very good example of such plug and play facilities”, he added.

The Prime said that this is for the first time a 32 km long stretch has been operationalised in one go in the history of Metro in the country. He also noted the fast completion of the project despite the challenge of constructing Metro track over railway line.

The Prime Minister highlighted that the government  launched the FAME scheme to manufacture and operate electric buses so that the poor, middle class friends of cities can get rid of the smoke emanating from the buses. “So far, more than seven thousand electric buses have been approved in the country under this scheme”, Shri Modi added, “Central government has spent close to Rs. 3,500 crore on these electric buses.” The Prime Minister informed that eight hundred fifty electric buses have been introduced in the state of Gujarat as part of this scheme so far, of which a hundred are already running on the roads of  Gujarat.

Calling out the Central Governments of the past, the Prime Minister pointed out the  negligent amount of work done to clear out the traffic jams in the cities. Shri Modi interjected that the India of 21st century considers speed to be a critical factor and guarantee of expeditious development. The Prime Minister informed that this insistence on  speed is clearly visible in the National Gatishakti Master Plan and  also appears in the National Logistics Policy. “It is also evident in the drive to increase the speed of our railways”, the Prime Minister added.  We are working rapidly on running 75 Vande Bharat Trains by August, next year. The beauty of India’s Vande Bharat train is that it reaches the speed of 100 kmph in just 52 seconds, he informed.

Speaking about the developments made in the railway network, the Prime  Minister highlighted that a large part of the country’s railway network has been freed from unmanned gates. “Once the Eastern and Western Dedicated Freight Corridors are ready, the speed of goods trains will also increase and delays in passenger trains will also be reduced”, he added.

The Prime Minister acknowledged the monumental changes in the thought process about infrastructure development in the country along with the speed being the driving factor. “In the last 8 years, we have linked infrastructure with people’s aspirations” Shri  Modi continued, “There was a time when announcements regarding infrastructure were made keeping in mind the electoral gains and losses only. The income of the taxpayer was used only for political interests.” The double engine government has changed this thinking.” Highlighting the changes, the Prime Minister said that the basis of sustainable progress is an infrastructure built with strong and visionary thinking and the work being done today aligns with this thinking.

The Prime Minister expressed a wish that students of schools and engineering fields should be sensitized to the huge work that goes into the construction of underground and overground Metro and the type of investment that goes into it. This will increase their faith in the role of technology in the country’s progress and also create a sense of ownership in them. With this there will emerge a generation that will never harm public property as they will understand the ownership, efforts and investment that goes into them.

In concluding the address, the Prime Minister urged the need for more speed and power toward construction of modern infrastructure to build a developed India in Azadi Ka Amrit Kaal. “The double engine government in Gujarat is also making serious efforts for this. I believe that with Sabka Prayas (everyone’s efforts), this work will be able to be realised”, the Prime Minister concluded.

The Vande Bharat Express offers a myriad of superior and aircraft-like traveling experiences. It is equipped with advanced state-of-the-art safety features including an indigenously developed Train Collision Avoidance System – KAVACH. There are reclining seats in all classes while the Executive Coaches have the added feature of 180-degree rotating seats. Every coach is equipped with 32” screens providing passenger information and infotainment.

Phase-I of Ahmedabad Metro project comprises about 32 km of the East-West corridor from Apparel park to Thaltej and the North-South corridor between Motera to Gyaspur. The Thaltej-Vastral route in the East-West corridor has 17 stations. This corridor also has a 6.6 km underground section with four stations. The 19 km North-South corridor that connects Gyaspur to Motera Stadium has 15 stations. The entire Phase 1 project is built at a cost of more than ₹12,900 crores. Ahmedabad Metro is a massive state of art infrastructure project involving underground tunnels, viaducts & bridges, elevated and underground station buildings, ballastless rail tracks and driverless train operation compliant rolling stock etc. The metro train set is equipped with an energy-efficient propulsion system which can save about 30-35% of energy consumption. The train has a state of art suspension system providing a very smooth riding experience to passengers. Inauguration of Ahmedabad Phase-1 metro project will provide world-class multi-modal connectivity to the people of the city. Multi-Modal connectivity is being provided with the Indian Railways, and Bus system (BRTS, GSRTC and City Bus service). This includes connectivity with BRTS at Ranip, Vadaj, AEC station etc. and with Indian Railways at Gandhidham, Kalupur and Sabarmati station. At Kalupur, the metro line will be connected to the High-Speed Rail system connecting Mumbai and Ahmedabad.
The inauguration and foundation stone of these wide-ranging developmental projects reflect the commitment of the Prime Minister to develop world-class infrastructure, enhance urban mobility and improve multi-modal connectivity. It also showcases the continuous focus of his government on enhancing the ease of living of the common man.