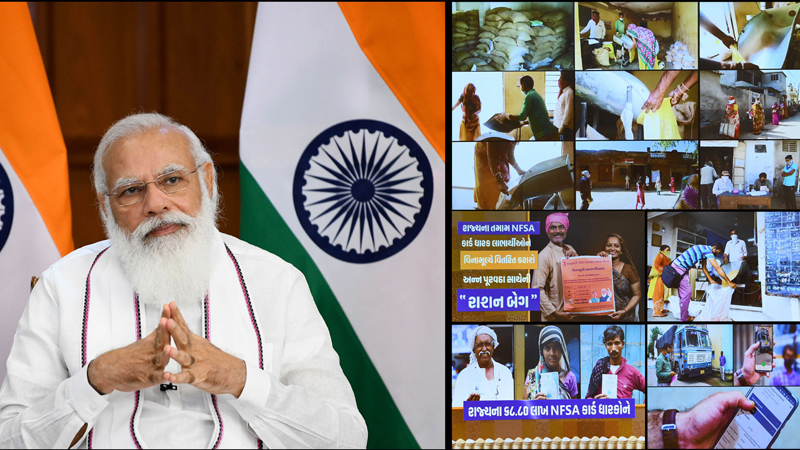 Addressing the event, the Prime Minister said that lakhs of families in Gujarat are getting free ration under PM Garib Kalyan Ann Yojana. This free rations reduces distress for the poor and gives them confidence. He said that the poor should feel that whatever might be the calamity, the country is with him.

The Prime Minister pointed out that after independence, almost every government talked about providing cheap food to the poor. The scope and budget of cheap ration schemes increased year after year, but the effect it should have had remained limited. The country’s food stocks kept increasing, but starvation and malnutrition did not decrease in that proportion. One major reason for this was the lack of an effective delivery system. To change this situation work was started afresh after 2014. He said, using new technology, crores of fake beneficiaries were weeded out of the system and ration cards were linked to Aadhar cards. This helped in ensuring that no citizen went hungry despite the biggest calamity of the century when livelihood were threatened and business suffered due to lockdown. The world has acknowledged the  Pradhan Mantri Garib Kalyan Anna Yojana. Free ration has been made available to more than 80 crore people during the pandemic with an expenditure of more than 2 lakh crore rupees, said the Prime Minister.

The Prime Minister said today, in addition to the quota of wheat at Rs 2/kg, rice at Rs 3/kg, 5 kg of wheat and rice is being given free to every beneficiary. That is, almost double the amount of ration is being provided to the ration card holders than before this scheme started. This scheme is going to continue till Diwali. No poor will sleep hungry, said the Prime Minister. He praised the Gujarat government for taking care of the migrant labourers, fulfilling the purpose of One Nation One Ration Card Initiative.

The Prime Minister said today the country is spending lakhs of crores on infrastructure, but at the same time, to improve the quality of life of common human beings, it is also setting new benchmarks for Ease of Living. Empowerment of the poor is being given top priority today. They are being empowered as more than 2 crore poor families got houses, 10 crore families got toilets. Similarly, they get empowered when they get included in the banking system via Jan-Dhan account, said the Prime Minister.

The Prime Minister said there are many such works in the entire country including Gujarat, due to which the confidence of every countryman and every region is increasing today. And it is this self-confidence which is the formula to overcome every challenge, to achieve every dream.

Referring to India’s Olympic contingent, the Prime Minister said despite the once-in-a-century calamity, the highest number of players qualified for Olympics. They just didn’t qualify but are giving tough fights to better ranked players.

The Prime Minister urged the people to continue this confidence in the fight against Corona and also in our vaccination campaign. He stressed on the need to maintain our vigilance continuously, in this environment of global pandemic.

He said that as the country is moving rapidly towards the vaccination milestone of 50 crore, Gujarat is also approaching the milestone of 3.5 crore vaccine doses. He stressed the need to vaccinate, wearing masks and avoid being a part of the crowd as much as possible.

The Prime Minister gave a resolution to the countrymen to awaken new inspiration for nation building. He urged to take this holy vow during the 75 years of independence. In these resolutions, he said poor, rich, men and women, downtrodden, everyone has an equal share, he concluded.

It may be noted that nearly 948 Lakh Metric Tonnes of foodgrains was allocated last year which is 50% more than a normal year to ensure food security during COVID. About Rs. 2.84 Lakh crore food subsidy incurred during 2020-21.

More than 3.3 crore eligible beneficiaries in Gujarat got 25.5 Lakh Metric tonnes of foodgrain, incurring a subsidy amount of more than 5 thousand crore.

To further strengthen food security for migrant beneficiaries, One Nation One Ration Card implemented so far in 33 States/UTs.