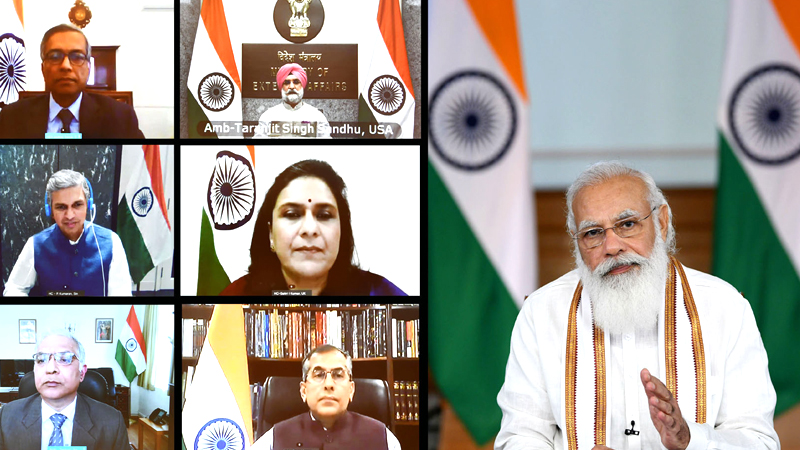 In a first of its kind initiative, the Prime Minister Shri Narendra Modi interacted with Heads of Indian Missions abroad and stakeholders of the trade & commerce sector via video conference. The Union Commerce Minister and External Affairs Minister were also present during the interaction. The interaction also witnessed participation of Secretaries of more than twenty departments, state government officials, members of Export Promotion Councils and Chambers of Commerce.

Addressing the gathering, the Prime Minister said that this is the time for Azadi ka Amrit Mahotsav. Along with celebrating the 75th festival of independence, this is an opportunity to build a clear vision and roadmap for future India. In this, our Export Ambitions and all the stakeholders play a major role. He added that today the world is shrinking every day due to physical, technological and financial connectivity. In such an environment, new possibilities are being created around the world for the expansion of our exports. He lauded the stakeholders for this initiative and commended the enthusiasm, optimism and commitment shown by all of them to achieve our ambitious goals regarding exports. He reminded that one of the major reasons, India had the highest share in the global economy in the past was it’s strong trade and exports. He stressed on the importance of strengthening our exports in regaining our old share in the global economy.

The Prime Minister urged the stakeholders to put all their efforts to take advantage of the new opportunities created by the changes in the Global Supply Chain in the Post Covid Global World. Considering the size of our economy and potential, our manufacturing and service industry base, there is tremendous potential for export growth. He added that when the country is moving towards the mission of Atmanirbhar Bharat, one of its goals is to increase India’s share in exports manifold. He said that to achieve this we have to make sure that we get access to the global supply chain, so that our business can scale and grow. He added that our industry will also have to move towards the best technology, focus on innovation and increase share in R&D. He said our share in the Global Value Chain will grow only by following this path. While encouraging competition and excellence, we have to prepare global champions in every sector, he stressed.

The Prime Minister listed four factors that are very important for increasing exports. Manufacturing in the country has increased manifold and that has to be qualitatively competitive. Second, The problems of transport, logistics should be removed for that centre, states and private stakeholders will have to work continuously. Third, The government should walk shoulder to shoulder with the exporters and, finally,  the international market for Indian products needs to be expanded . He said only when these four factors are synergized, India will be able to achieve the goal of Make in India for the world in a better way.

The Prime Minister said today, the government in the country, in the states is moving forward, understanding the needs of the business world. He listed the initiatives of the Government to boost MSMEs like many relaxations given in compliances under Atmanirbhar Bharat Abhiyan and provision of Emergency Credit Line Guarantee Scheme of Rs 3 lakh crore. He also noted that the Production Linked Incentive Scheme will not only help in increasing the scale of our manufacturing but also increase the level of global quality and efficiency. This will develop a new ecosystem of Atmanirbhar Bharat. The country will get new Global Champions in Manufacturing and Export. He elaborated how Production Linked Incentives helped to strengthen the mobile phone manufacturing sector. The mobile phone sector, we are also experiencing its impact. 7 years ago, we used to import mobile phones worth about $ 8 billion. Now, it has come down to $2 billion. 7 years ago, India used to export mobile phones worth only $ 0.3 billion. Now it has increased to more than 3 billion dollars.

The Prime Minister said the government, both at centre and states are also focussing to reduce the time and cost of logistics in the country. For this, work is going on at a rapid pace in every level to create a multimodal connectivity.

The Prime Minister said continuous efforts are being made by the government to minimize  the impact of Pandemic. It is our best effort to keep the virus infection under control. The work of vaccination is going on at a fast pace in the country today. Every possible step has been taken to solve all the problems of the countrymen and the industry. He added that our industry and business has also innovated during this period, by adapting itself to new challenges. The industry also helped the country deal with the medical emergency and also played a role in reviving growth. This is the reason that today along with drugs and pharmaceuticals, our exports have reached a new level in sectors like agriculture. He said today we are seeing positive signs not only of recovery in the economy but also about high  growth. Therefore, this is a good  time to set high targets for exports and achieve them. He said the Government is taking necessary steps at every level to achieve this. Recently, he said the Government has taken a major decision for our exporters to get a boost of about Rs 88000 crore rupees in the form of insurance cover. Similarly by rationalizing our export incentives our exports would be WTO compliant and will also get a boost.

The Prime Minister stressed on the importance of stability in doing business. He said the decision taken by India to get rid of retrospective taxation shows our commitment, shows consistency in policies and gives a clear message to all the investors that India is not only opening the doors of new possibilities but the decisive Government of India, has the will to fulfill its promises.

The Prime Minister stressed on the role of states in achieving the export targets and implementing reforms, attracting investment, easing of doing business and creating last mile infrastructure. He said the central government is working closely with the states to minimize the regulatory burden so as to increase export and investment. He said a healthy competition is being promoted between the states to make export hubs in the states. States are being encouraged to focus on one product in each district.

The Prime Minister said our ambitious target regarding exports can be achieved only through a holistic and detailed action plan. He urged the stakeholders to accelerate our existing exports and also work to create markets, new destinations for new products. At present, almost half of our exports are to only 4 major destinations. Similarly, about 60 percent of our exports are related to Engineering Goods, Gems and Jewellery, Petroleum and Chemical Products and Pharmaceuticals. He urged them to find new destinations and also take our new products to the world. He added that with the opening of sectors like Mining, Coal, Defense, Railways, our entrepreneurs are also getting new opportunities to increase exports.

The Prime Minister said to the Ambassadors, officials from the Ministry of External Affairs that in whichever country they are representing India, they understand the needs of that country very well. He asked them to act as a bridge for the commerce industry here. He urged that India Houses present in different countries should also be representative of the manufacturing power of India. He requested the Ministry of Commerce to put in place such a system so that there is a constant communication between our exporters and our missions.

The Prime Minister said for maximum benefit to our economy from our exports, we have to build a seamless and high quality supply chain within the country as well. For this we need to build a new relationship and a new partnership. He requested all Exporters to strengthen partnership with our MSMEs, farmers and our fishermen, promote our Startups and support them.

The Prime Minister gave a call to establish a new identity of Quality and Reliability. He said it is our endeavor to create a natural demand for high value-added products of India in every nook and corner of the world. He assured the industry, all the exporters that the government will support them in every way. He urged the industry to prove the resolve of Atmanirbhar Bharat and a prosperous India!

Union External Affairs Minister Shri S. Jaishankar highlighted the unique character of the event. He said that while the theme of the event is local goes global, the Indian Missions also need to be globally local to help connect our producers with the demand in specific countries. Union Commerce Minister Shri Piyush Goyal said that the global environment is favourable and we should look at leveraging comparative and competitive advantages with respect to other countries for increasing our exports.

Heads of Indian Missions gave their inputs and suggestions to increase India’s exports. They talked about setting sector and region specific trade targets, the need to focus on value addition, quality standards of products, supply chain diversification, ensuring reliability in supplies and improving connectivity. They said that there is a need to focus on new markets and region specific products, while at the same time, maintaining our competitive edge in the regions and products where we are doing well currently.