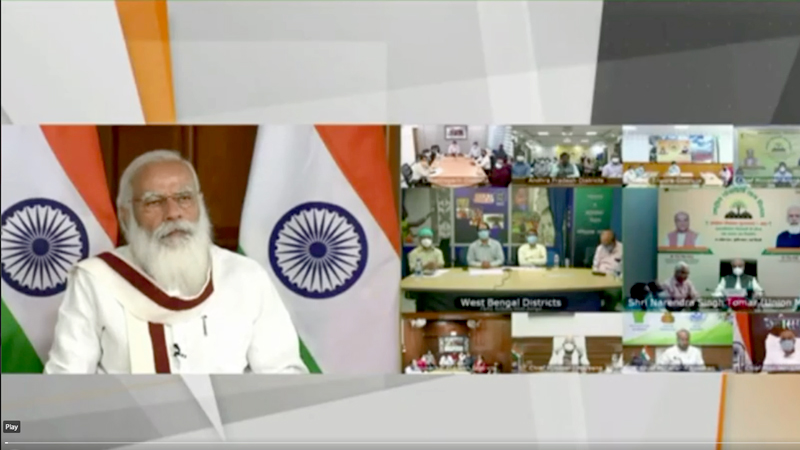 The Prime Minister, Shri Narendra Modi launched the distribution of e-property cards under the SWAMITVA scheme today on National Panchayati Raj Day through video conferencing. 4.09 lakh property owners were given their e-property cards on this occasion, which also marked the rolling out of the SVAMITVA scheme for implementation across the country. Union Minister Shri Narendra Singh Tomar attended the event. Chief Ministers and Panchayati Raj Ministers of the concerned states were also present.

The Prime Minister said that Panchayati Raj Day is an occasion to rededicate ourselves to the pledge of redevelopment of rural India. This is a day to acknowledge and appreciate the extraordinary work of our Gram Panchayats, he said.

Prime Minister appreciated the role of Panchayats in management of Corona and providing local leadership to stop Corona from entering the villages and spreading awareness. He reiterated the need to keep the pandemic out of rural India. Shri Modi asked the Panchayats to ensure complete implementation of guidelines that are being issued from time to time. He reminded  that this time we have shield of vaccine. We have to ensure that every person in the village is vaccinated and every precaution is taken, he added.

The Prime Minister stressed that it is our responsibility that in these difficult times, no family should go hungry. He informed under Pradhanmantri  Gareeb Kalyan Yojna every poor person will get free ration in the months of May and June.  The Scheme will benefit 80 crore beneficiaries and centre is spending more than 26,000 crore on this scheme.

The Prime Minister noted the impact of Swamitva Yojna in the 6 states where it was launched within just one year. Under the scheme, the entire village properties are  surveyed  by drone and property card are distributed to the owners. Today 4.09 lakh people were given such e- property cards in more than 5 thousand villages. The Scheme has infused a new confidence in the villages  as property documents remove uncertainty and reduce the chances of property disputes while protecting the poor from exploitation and corruption. This eases credit possibility also. “In a way, this scheme will ensure security of the poor section and planned development of villages and their economy”, said  the Prime Minister. He requested the States to sign MoU with Survey of India and change state laws wherever needed. He asked banks to ensure easy credit by preparing a format of property card that is easily acceptable for loan formalities.

The Prime Minister reiterated that progress and cultural leadership has always been with our villages. For this reason, Centre is keeping villages at the centre of all its policies and initiatives. “Our effort is that villages of modern India should be capable and self-reliant”, said the Prime Minister.

The Prime Minister enumerated the steps for increasing the role of the Panchayats. The Panchayats are getting new rights, they are being connected by fibe-net. Their role in Jal Jeevan Mission to provide drinking water by tap to every household is very critical.  Similarly, the movement to provide pukka village to every poor person or rural employment schemes are being run through Panchayats. The Prime Minister also talked about the growing financial autonomy of the Panchayats. Shri Modi said that the Government of India has allocated an unprecedented 2.25 lakh crore rupees to the Panchayats. This also leads to higher expectation of transparency in accounts. The Prime Minister said that Panchayati Raj Ministry has made arrangements of online payment through ‘e-Gram Swaraj’. Now all payments will be through Public Finance Management System (PFMS). Similarly, online audit will ensure transparency. He said many panchayats have linked themselves with PFMS and asked others to do so quickly.

Mentioning the upcoming entry into 75th year of Independence, the Prime Minister asked the Panchayats to keep the wheel of development moving in the face of challenges.  He asked them to fix goals for their village’s development and fulfil them within given time frame.