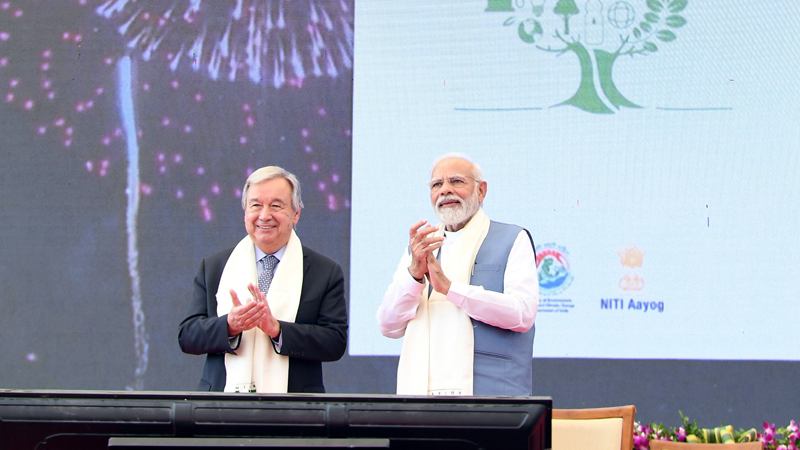 The Prime Minister, Shri Narendra Modi attended a bilateral meeting with UN Secretary-General, H.E. Mr Antonio Guterres and subsequently launched Mission LiFE at the Statue of Unity, Ekta Nagar, Kevadia, Gujarat. The Prime Minister and the UN Secretary-General also paid floral tributes at the Statue of Unity. Congratulatory video messages on the launch of Mission LiFE by the heads of 11 nations representing all regions of the United Nations were also relayed.

Addressing the gathering, the Prime Minister informed that India is like a second home for Secretary-General Antonio Guterres and he had travelled to India many times during the days of his youth. He further pointed out the ancestral connection of Mr Guterres with the state of Goa in India. The Prime Minister thanked Mr Guterres for taking the opportunity to visit India and highlighted that welcoming him to Gujarat is like welcoming a member of the family.

The Prime Minister expressed delight at the support that has been showered upon India for taking up the Mission LiFE initiative and thanked the heads of all nations for sending in their congratulatory messages on this gracious occasion. Highlighting the importance of unity in the fight against climate change, Shri Modi said that the launch of Mission LiFE is taking place before the Statue of Unity, a colossal statue of the pride of India, Sardar Vallabh Bhai Patel. “The world’s largest statue will be a source of inspiration in achieving the set targets”, he said.

“When the standards are exceptional, the records are huge”, the Prime Minister remarked. Highlighting the significance of the launch taking place in Gujarat, the Prime Minister informed that Gujarat was the first state in the country to initiate steps in the direction of renewable energy and climate protection. Be it installing solar panels on canals or initiating water conservation projects for the drought-affected areas of the state, Gujarat has always come forward as a leader and a trendsetter.

The Prime Minister pointed towards the prevailing notion that climate change is an issue only related to policy that leads to a thought process that leaves this all-important issue only to the government or international organisations. He said that people are experiencing the effects of climate change in their surroundings, and in the last few decades unexpected calamities were witnessed. This is making it amply clear that Climate change goes beyond only policy-making and people themselves are finding that they should contribute as an individual, families and as communities to the environment.

Noting that Gujarat is the birthplace of Mahatma Gandhi, the Prime Minister said “He was one of those thinkers who long ago understood the importance of environmental protection and living life in harmony with nature. He developed the concept of trusteeship. Mission LiFE makes us all trustees of the environment. A trustee is someone who does not allow indiscriminate use of resources. A trustee works as a nurturer and not as an exploiter”

The Prime Minister elaborated that Mission LiFE emboldens the spirit of the P3 model i.e. Pro Planet People. Mission Life, unites the people of the earth as pro planet people, uniting them all in their thoughts. It functions on the basic principles of ‘Lifestyle of the planet, for the planet and by the planet’. The Prime Minister remarked that the way to the future can only be paved by learning from the mistakes of the past. He recalled that India has had a tradition of worshipping nature for thousands of years. The Vedas precisely mention the importance of elements of nature like water, earth, land, fire and water. The Prime Minister quoted the Atharvaveda and recited, “‘Mata Bhumiah Putroham Prithivyah’ that is, the earth is our mother and we are her children.”

The Prime Minister threw light on the concept of ‘Reduce, Reuse and Recycle’ and circular economy and mentioned that it has been a part of the lifestyle of Indians for thousands of years. Speaking of other parts of the world, the Prime Minister said that such practices are prevalent, which inspire us to walk in harmony with nature. “Mission LiFE will encompass every lifestyle related to the conservation of nature, which our ancestors adopted, and that can be made a part of our lifestyle today”, he said.

India is committed to tackling the menace of climate change. Today, the Prime Minister informed,  “The annual per capita carbon footprint in India is only about 1.5 tonnes, compared to the world average of 4 tonnes per year.” Nevertheless, India is working at the forefront to solve global problems like climate change. Shri Modi talked about the initiatives like Ujjwala Yojana, 75 ‘Amrit Sarovars’ in every district and unprecedented emphasis on waste to wealth. Today India has the fourth largest capacity for renewable energy in the world. “Today we are ranked fourth in wind energy and fifth in solar energy. India’s renewable energy capacity has increased by about 290 percent in the last 7-8 years. We have also achieved the target of achieving 40 percent of the electric capacity from non-fossil-fuel sources 9 years ahead of the deadline. We had also achieved a target of 10 percent ethanol blending in petrol, and that too 5 months before the deadline. Through the National Hydrogen Mission, India has moved towards an environment-friendly energy source. This will help India and many countries of the world to achieve their goal of net zero”, the Prime Minister added. India has become a prime example of how progress and nature can go hand in hand. Now that India has also become the fifth largest economy in the world, our forest area is also increasing and the number of wildlife is also increasing, he said.

Highlighting the global campaign of One Sun, One World, One Grid, the Prime Minister remarked that India now wants to increase its partnership with the world even more while strengthening its resolve towards such goals. “By leading the creation of the Coalition for Disaster Resilient Infrastructure, India has conveyed its concept towards environmental protection to the world. Mission LiFE is the next step in this series.”, the Prime Minister added.

The Prime Minister noted the fact that whenever India and the United Nations have worked together, new ways of making the world a better place have been found. The Prime Minister said, “India had proposed the International Day of Yoga, which was supported by the United Nations. Today it is inspiring millions of people around the world to lead a healthy life.” Giving the example of the  International Year of Millets which found profound support for the United Nations, the Prime Minister remarked that India wanted to connect the world with its traditional and eco-friendly, coarse cereals. He said that the International Year of Millets next year will be discussed all over the world. He added, “Mission LiFE will be successful in taking it to every corner of the world, to every country.” “We have to remember this mantra – Prakriti Rakshati Rakshita, that is, those who protect nature, nature protects them. I believe we will build a better world by following our Mission LiFE” the Prime Minister concluded.

UN Secretary-General, H.E. Mr Antonio Guterres said that in these perilous times for our planet, we need all hands on deck. Lifestyle For Environment -LiFE initiative is designed to highlight essential and hopeful truths. All of us, individuals and communities, can and must be part of the solution of protecting our planet and our collective futures. After all, over-consumption is at the root of the triple planet emergency of climate, change, biodiversity loss and pollution. We are using the equivalent of 1.6 planet earth to support our lifestyle. This great excess is compounded by the great inequality,  he said. He hoped that initiatives of the LiFE movement spread throughout the world. “I am immensely encouraged by the commitment that India has made to pursue environmentally sound policies and its pledge to significantly increase investment in renewable energy, championing International Solar Alliance…..we need to unleash the renewable revolution and I look forward to working with India in driving this agenda forward.” Talking about the upcoming CoP 27 in Egypt, the Secretary-General said that the conference presents a key political opportunity to reveal trust and accelerate action across all the pillars of the Paris agreement. “With its vulnerability to climate impacts and its massive economy, India can play a critical bridging role”, he said.

Quoting Mahatma Gandhi, Mr Guterres said, “The world has enough for everyone’s needs but not everyone’s greed.” He further added that we must treat the earth’s resources with wisdom and respect. The UN Secretary-General pledged to alter the economies and lifestyles so we are able to share earth’s resources fairly and only take what we need. He also urged everyone to count on India as it assumes G20 Presidency  to help usher in a new era of sustainability, fully in line with its history, its culture and its tradition.”

Chief Minister of Gujarat, Shri Bhupendra Patel, Union Minister of External Affairs, Shri Subrahmanyam Jaishankar and UN Secretary-General, H.E. Mr Antonio Guterres were those present on the occasion among others.

Mission LiFE aims at following a three-pronged strategy for changing our collective approach towards sustainability. First is by nudging individuals to practise simple yet effective environment-friendly actions in their daily lives (demand); second is by enabling industries and markets to respond swiftly to the changing demand (supply) and; third is to influence government and industrial policy to support both sustainable consumption and production (policy).