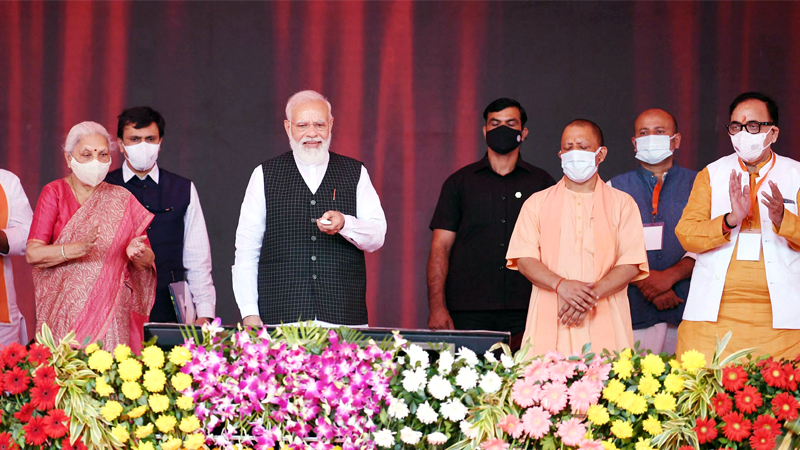 Addressing the gathering, the Prime Minister said the country has achieved a major milestone of 100 crore vaccine doses in its fight against the corona epidemic. “With the blessings of Baba Vishwanath, with the unwavering glory of Maa Ganga, with the unshakable faith of the people of Kashi, the campaign of free vaccine for all is progressing successfully”, the Prime Minister said.

The Prime Minister lamented that in post-independent India, health infrastructure did not get the required attention for a very long time and citizens had to run from pillar to post for proper treatment, leading to worsening of the condition and financial strain.  This led to a persistent worry about medical treatment in the hearts of the middle class and poor people. Those whose governments remained in the country for a long time, instead of the all-around development of the country’s healthcare system, kept it deprived of facilities.

The Prime Minister said that PM Ayushman Bharat Health Infrastructure Mission aims to tackle this deficiency. The aim is to strengthen the critical healthcare network from village to block to the district to the regional and national level in the next 4-5 years. Describing the initiative taken by the government under the new Mission, the Prime Minister said that there are 3 major aspects of the Ayushman Bharat Health Infrastructure Mission to address the different gaps in the health sector of the country. The first is related to the creation of elaborate facilities for diagnostics and treatment. Under this, Health and Wellness Centers are being opened in villages and cities, where there will be facilities for early detection of diseases. Facilities like free medical consultation, free tests, free medicine will be available in these centres. For serious illness, 35 thousand new critical care-related beds are being added in 600 districts and referral facilities will be given in 125 districts.

The second aspect of the scheme, the Prime Minister said, is related to the testing network for the diagnosis of diseases. Under this mission, the necessary infrastructure will be developed for the diagnosis and monitoring of diseases. 730 districts of the country will get Integrated Public Health labs and 3 thousand blocks will get Block Public Health Units. Apart from that, 5 Regional National Centers for Disease Control, 20 Metropolitan units, and 15 BSL labs will further strengthen this network, said the Prime Minister.

The Third aspect, according to the Prime Minister, is the expansion of existing research institutions that study pandemics. Existing 80 Viral Diagnostic and research labs will be strengthened, 15 Biosafety level 15 labs will be operationalized, 4 new National institutes of Virology and a National Institute for One Health are being established. WHO regional research platform for South Asia will also strengthen this network. “This means, through PM Ayushman Bharat Health Infrastructure Mission an entire ecosystem for services from treatment to critical research will be created in every corner of the country”, said the Prime Minister.

The Prime Minister highlighted the employment potential of these measures and said that PM Ayushman Bharat Health Infrastructure Mission, along with health, is also a medium of aatmnirbharta. “It is a part of the effort to achieve holistic health care. Which means healthcare that is affordable and accessible to all.” Shri Modi said that holistic healthcare focuses on wellness along with health. Schemes like Swachh Bharat Mission, Jal Jeevan Mission, Ujjwala, Poshan Abhiyan,  Mission Indradhanush have saved crores of people from disease. More than 2 crore poor people got free treatment under Ayushman Bharat Yojna and Many health related issues are being solved through Ayushman Bharat Digital Mission, the Prime Minister said.

The Prime Minister remarked that today there is a government at the Center and in the state which understands the pain of the poor, downtrodden, oppressed, backward and middle class. “We are working day and night to improve health facilities in the country”, said the Prime Minister.

The Prime Minister said the speed with which new medical colleges are being opened in Uttar Pradesh will have a great impact on the number of medical seats and doctors in the state. Due to more seats, now the children of poor parents will also be able to dream of becoming a doctor and fulfil it, he added.

Speaking about the past plight of the holy city of Kashi, the Prime Minister said that people were almost resigned to the pathetic state of affairs of the city’s infrastructure. Things changed and today the heart of Kashi is the same, the mind is the same, but sincere efforts are being made to improve the body. “The work done in Varanasi in the last 7 years was not done in the last several decades”, he said.

The Prime Minister singled out the progress of BHU towards global excellence as one of the key achievements of Kashi over the past years. “Today, from technology to health, unprecedented facilities are being created in BHU. Young friends from all over the country are coming here for studies”, he pointed out.

Praising the 60 per cent growth in production and 90 per cent growth in sales of Khadi and other cottage industry products in the last 5 years in Varanasi, the Prime Minister once again exhorted the countrymen to promote local products and get ‘vocal for local’. He said that local doesn’t mean just a few products like diyas but any product that is the result of the hard work of countrymen needs the promotion and patronage of all the countrymen during the festival period.