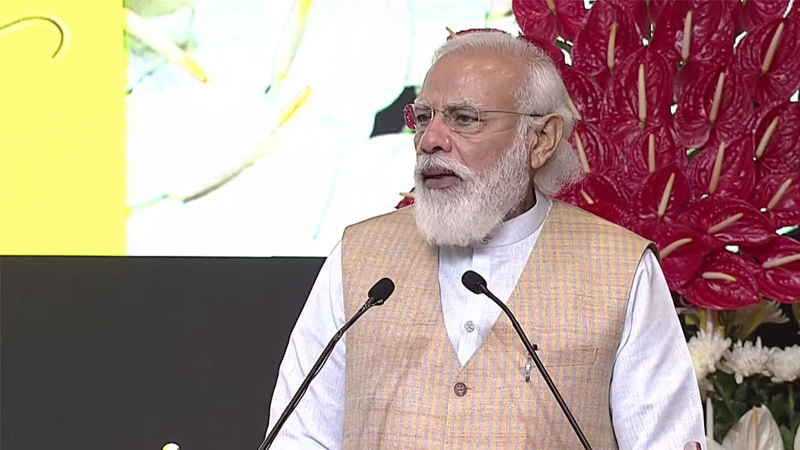 Speaking on the occasion, the Prime Minister said In 2014, the countrymen took a pledge to make India open defecation free – ODF and they fulfilled this pledge with the construction of more than 10 crore toilets. Now the goal of ‘Swachh Bharat Mission-Urban 2.0’ is to make the cities  Garbage-Free, completely free of garbage, he said. The Prime Minister underlined the scope of the country’s target in the next phase of Mission AMRUT as  ‘Improving sewage and septic management, making our cities water safe cities and ensuring that no sewage drains anywhere in our rivers’.

The Prime Minister dedicated the successes of transformation in the urban regeneration and cleanliness to Mahatma Gandhi. He said these missions are the result of inspiration by Mahatma Gandhi and is being realized through his ideals only. He also highlighted the ease for mothers and daughters due to the construction of toilets.

Saluting the spirit of the nation, the Prime Minister remarked that the journey of Swachh Bharat Abhiyan and AMRUT Mission so far makes every countryman proud. He encapsulated the feeling when he said “In this, there is a mission, there is respect, there is dignity, there is also the ambition of a country and there is also unmatched love for the motherland”.

Noting that today’s event was taking place in the Ambedkar International Centre, the Prime Minister remarked that Babasaheb believed in urban development as a great means of removing inequality. Many people from villages come to cities with an aspiration for a better life. He said, they get employment but their standard of living remains in a difficult situation even compared to their lives in the villages. This is like double jeopardy of staying away from home, and after that to stay in such a difficult situation. He said Babasaheb’s emphasis was on changing this situation by removing this inequality. The next phase of Swachh Bharat Mission and Mission Amrit is an important step towards fulfilling the dreams of Babasaheb, said the Prime Minister.

He said, along with, Sabka Saath, Sabka Vikas and Sabka Vishwas, Sabka Prayas is critical for the campaign of cleanliness. Further, commenting on the level of public participation with regard to cleanliness, the Prime Minister expressed happiness that the present generation has taken the initiative to strengthen the cleanliness campaign. Toffee wrappers are no longer thrown on the ground but kept in pocket by children. Small children now ask the elders to avoid mess. “We have to remember that cleanliness is not a task just for a day, a fortnight, a year or for just a few people. Cleanliness is a great campaign for everyone, every day, every fortnight, every year, generation after generation. Cleanliness is a lifestyle, cleanliness is a life mantra, ” said the Prime Minister. The Prime Minister recalled his efforts as Chief Minister of Gujarat for enhancing the tourist potential of Gujarat where he turned the quest for cleanliness into Jan Andolan by Nirmal Gujarat Programme.

Enumerating the steps taken to take the campaign of cleanliness to the next level, the Prime Minister noted, today, India is processing about one lakh tonnes of waste every day. He remarked, ‘when the country started the campaign in 2014, less than 20 per cent of the waste generated every day in the country was processed. Today we are processing about 70 per cent of daily waste. Now we have to take it to 100%’. The Prime Minister also talked about enhanced allocations for the Urban Development Ministry. He said in the preceding 7 years before 2014, the Ministry was given about 1.25 lakh crore rupees while in 7 years from 2014 almost 4 lakh crore rupees were allocated for the Ministry.

The use of modern technology is also continuously increasing for the development of cities in the country. The Prime Minister, mentioned recently launched the National Automobile Scrappage Policy, and pointed out that this new scrapping policy strengthens the campaign of Waste to Wealth and a circular economy.

The Prime Minister referred to street vendors and hawkers as  one of the most important partners of any city in the program related to urban development. The Prime Minister reiterated that PM Svanidhi Yojana has come as a new ray of hope for these people.More than 46 street vendors have availed benefits under Svanidhi scheme and 25 lakh people have received 2.5 thousand crore rupees. The Prime Minister said that these vendors are promoting digital transactions and maintaining a very good record of paying back their loans. He expressed happiness that big states  like Uttar Pradesh and Madhya Pradesh have taken the lead in implementing the scheme.