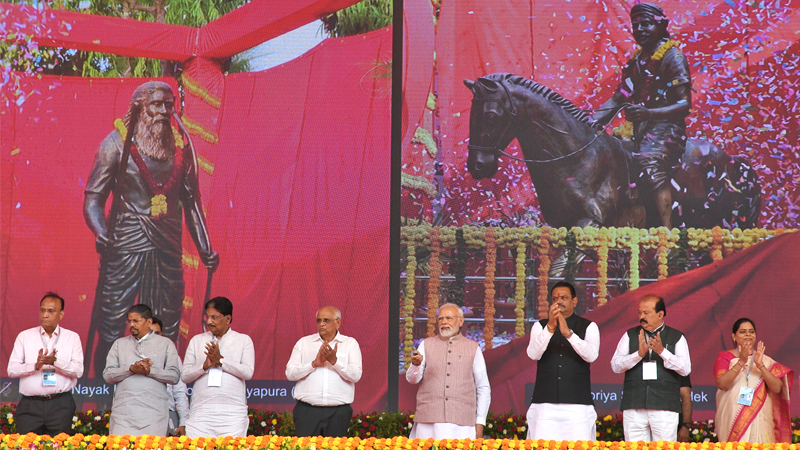 The Prime Minister, Shri Narendra Modi dedicated and laid the foundation stone of projects worth around Rs. 860 crores in Jambughoda, Panchmahal in Gujarat today.

Addressing the gathering, the Prime Minister said that today is a momentous day for the Adivasi and tribal communities of Gujarat. The Prime Minister recalled visiting Mangarh earlier in the day and paying his tributes to Govind Guru and thousands of tribal freedom fighters who sacrificed their lives for India’s freedom.

Recalling his long association with the area, the Prime Minister expressed great pride in being present at Jambughoda which has been a witness to the great sacrifice of the tribal community of India. “Today we are all full of pride as we salute the immortal fighters like Shaheed Joriya Parmeshwar, Roop Singh Nayak, Galaliya Nayak, Ravjida Nayak and Babariya Galma Nayak”, the Prime Minister said.

Today, the Prime Minister said,  hundreds of crores worth of projects related to health, education and skill development of the entire region are being inaugurated and the foundation stone is being laid. Referring to the new administrative campus of Govind Guru University and  Kendriya Vidyalaya, the Prime Minister said that these projects will help our tribal children a lot.

The Prime Minister recalled a tradition started long ago in Gujarat of naming schools after martyrs. Primary schools of Vadek and Dandiyapura were named after Sant Joriya Parmeshwar and Roop Singh Nayak. Today, the Prime Minister informed, these schools have acquired a completely new look. A grand statue of both tribal heroes has been inaugurated in these schools that have now become important centres of both education and the contribution of tribal society to the freedom struggle, he said.

The Prime Minister recalled the development gap created by the earlier government that he inherited when he was given the chance to serve Gujarat two decades ago. There was a great lack of basic facilities for education, nutrition and water in the tribal areas. “To deal with this situation, we worked in the spirit of Sabka Prayas”, he said, “Our tribal brothers and sisters took charge of the change and the government, being a friend to them, extended all possible help.” The Prime Minister pointed out that the change is not a result of a single day’s work but it is the round-the-clock efforts of lakhs of tribal families. The Prime Minister gave examples of 10 thousand new schools from primary to secondary levels that began in the tribal belt, dozens of Eklavya Model Schools, special residential schools for daughters, and ashram shalas. The Prime Minister also noted the facilities of free travel on buses provided to the daughters and the availability of nutritious food in schools.

Recalling the Kanya Shiksha Rath, the Prime Minister highlighted the efforts of the government to persuade people to send their daughters to school. He also pointed out the absence of scientific education in school as another challenge that marred the tribal belt and informed that in the last two decades, 11 science colleges, 11 commerce colleges, 23 arts colleges and hundreds of hostels were opened in tribal districts.

The Prime Minister also threw light on the severe shortage of schools in tribal areas 20-25 years ago. “Today there are 2 tribal universities, Govind Guru University in Godhra and Birsa Munda University in Narmada that make for the finest institutions of higher education” he added. The Prime Minister further elaborated that the facilities at Govind Guru University will be further expanded after the inauguration of the new campus. He also mentioned that the new campus of the Skill University of Ahmedabad will also benefit the youth of all tribal areas including Panchmahal. “This is the first university in the country which has got the recognition to grant a Drone Pilot Licence”, Shri Modi underlined.

Throwing light on the huge role that Vanbandhu Kalyan Yojana has played in the all-round development of tribal districts in the last decades, the Prime Minister said that in the last 14-15 years, more than Rs 1 lakh crore has been spent under this scheme in tribal areas. He also informed that the Gujarat government has decided to further spend Rs 1 lakh crore in the coming years.

Giving insights into the overall development of the region the Prime Minister gave examples of piped water facilities, micro-irrigation, and the emphasis on the dairy sector in tribal areas. He also informed that Sakhi Mandals were formed to empower tribal sisters and increase their income. Underlining that the tribal youth should get the benefits of rapid industrialization in Gujarat, the Prime Minister mentioned the opening up of many modern training centres such as Vocational Centres, ITIs and Kisan Vikas Kendras that have helped around 18 lakh tribal youth acquire training and get placement.

Highlighting the menace of sickle cell disease 20-25 years ago, the Prime Minister pointed out that the tribal districts lacked dispensaries and had negligible facilities for large hospitals and medical colleges. “Today”, he said, “the double-engine government has established hundreds of small hospitals at the village level and opened up more than 1400 health and wellness centres in the tribal areas. He noted that the work on the new building of Godhra Medical College will reduce the burden on medical colleges built in Dahod, Banaskantha, and Valsad.

“Due to Sabka Prayas, good roads have reached every village in the tribal districts with 24 hours electricity.” He informed that the tribal district of Dang was the first district in Gujarat to have 24 hours electricity which resulted in the expansion of industries in tribal areas. “Along with the Golden Corridor of Gujarat, twin cities are being developed. Industrial development is happening rapidly in Halol-Kalol”, he informed.

Highlighting the efforts of the central government in the upliftment of tribal societies in India, the Prime Minister informed that it was the BJP government that created a separate ministry for the tribal society for the first time and implemented a successful scheme like Van Dhan. Furthering his point, the Prime Minister gave examples of the government abolishing the law banning the cultivation and sale of bamboo that had been going on since the British era, ending the continuous neglect of forest produce, giving the benefit of MSP to the tribals on more than 80 different forest produces, and working towards increasing the pride of the tribals while making their life easier. “For the first time, the tribal society has a feeling of increased participation in development and policy-making”, the Prime Minister said. He informed of the government’s decision to celebrate the birth anniversary of Bhagwan Birsa Munda as Janjatiya Gaurav Diwas.

The Prime Minister also underlined the continuous effort of the double-engine government towards the poor, downtrodden, backward, and tribal communities. The Prime Minister gave examples of the free ration scheme, free covid vaccines, treatment up to Rs 5 lakh for the poor, assisting pregnant women so that they get nutritious food, and PM Kisan Samman Nidhi  Yojna for small farmers to avail loans for fertilisers, seeds, electricity bills etc. “Be it direct help or facilities like pucca houses, toilets, gas connections, and water connections, the biggest beneficiaries of these are tribals, dalits, and backward families”, Shri Modi stated.

Throwing light on the history of tribal heroes who played a huge role in saving India’s culture and faith, the Prime Minister gave examples of  Champaner, Pavagadh, Somnath, and Haldighati. He remarked, “Now the Pavagadh temple has been renovated and the flag is hoisted in full glory. Similarly, be it Ambaji Mata’s Dham and Devmogra Maa’s temple, continuous efforts are also being made for their development.”

The Prime Minister recognised the crucial role played by tourism to boost employment. He mentioned places like Panchmahal which is very rich from the point of view of tourism, Champaner-Pavagadh which is famous for ancient architecture, wildlife in Jambughoda, Hathni Mata Waterfall, eco-tourism sites in Dhanpuri, Kada Dam, Dhaneshwari Mata Temple, and Jand Hanuman Ji.and underlined that in the days to come, these places will be developed as a tourism circuit and will create new employment opportunities. “The development of places of pride for tribals and places of faith will give a lot of impetus to tourism”, he added.

Concluding the address, the Prime Minister praised the wide scope of development of the double-engine government and mentioned that the benefits of development reach everyone. “Our intention is clear, to bring change on the ground with hard work and dedication. Together we will build a developed Gujarat, and a developed India”, he concluded.

Chief Minister of Gujarat, Shri Bhupendra Patel, Members of Parliament, and Ministers of Gujarat Government were those present on occasion.