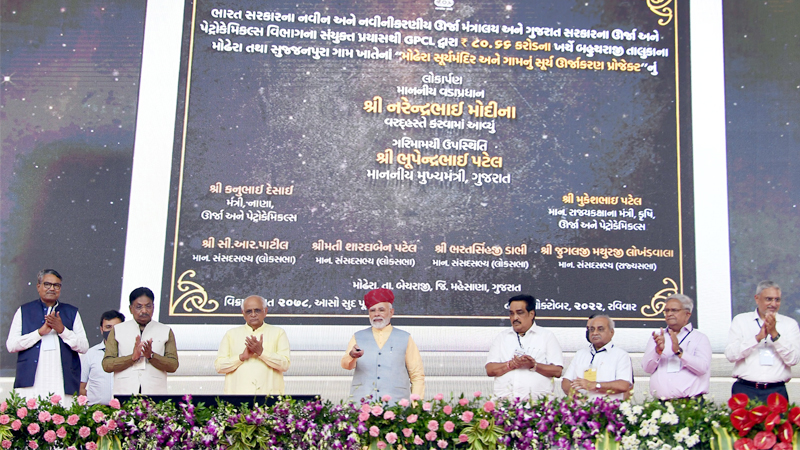 The Prime Minister, Shri Narendra Modi laid the foundation stone and dedicated various projects worth over Rs 3900 crore to the nation in Modhera, Mehsana, today. The Prime Minister also declared the village of Modhera as India’s first 24×7 solar-powered village.

The Prime Minister also extended Sharad Poornima and Valmiki Jayanti greetings to the nation and said that Maharishi Valmiki has introduced us to the ‘Samras’ life of Lord Ram and taught us the lessons of equality.

The Prime Minister said earlier Modhera was known for Surya Mandir but now Surya Mandir has inspired Saur Gram and that has made a place on the environment and energy map of the world. Despite several attempts over the centuries to raze Modhera to the ground, now Modhera is becoming the example of a blend of ancient and the modern, he said. “Modhera will always figure in any discussion about solar power anywhere in the world”, he said. The Prime Minister credited the successes in the area of solar energy and electricity coverage to the confidence of the people of Gujarat in the governments at the centre and the state. He said with dedication and far-reaching thinking and clear intention nothing is impossible.

The Prime Minister pointed out solar energy will power house lights, agricultural needs as well as vehicles in Modhera. “For a self-reliant India of the 21st century, we have to increase such efforts related to our energy needs”, Shri Modi added.  The Prime Minister said that he is working in the direction where the producer and the consumer of electricity are the people themselves. “Use the power you need and sell the excess power to the government”, he added. This will also get rid of electricity bills and will also generate extra income”, he added. The Prime Minister remarked that the norm used to be that the government used to produce electricity and the public would buy it from them, but today the Central Government is working towards policies that allow people to produce electricity by setting up solar panels in their homes and farmers in their fields while also installing solar pumps for irrigation.

​​Recalling the tough times, the Prime Minister said that it was the education of the girl child that got vastly affected by the absence of electricity. The Prime Minister also remarked that the people of Mehsana are naturally good at mathematics and science. “If you go to America, then the miracle of North Gujarat will be seen there in the fields of mathematics. If you go all over Kutch, you will see the teachers of Mehsana district”, he added, “It was the lack of electricity that obstructed their ability to achieve the deserved heights.” The Prime Minister further remarked that Gujarat has stamped its flag in India due to the faith that the people have shown in the government in the last two decades.

Recalling the time when the Prime Minister led Gujarat as the Chief Minister, Shri Modi said that a large chunk of the state budget had to be allocated to water as Gujarat was troubled by famine for seven out of ten years. “And that’s why when we came out with the Panchamrut scheme that focused on the water crisis in Gujarat”, he added. The Prime Minister recalled the success of Jyotigram Scheme that began in Unjha to provide electricity to every village for twenty-four hours, and the government had allocated a thousand days to complete the work. Talking about the Sujalam Sufalam Scheme, the Prime Minister expressed immense gratitude towards the farmers of the land who gave away their land for the Sujalam Sufalam Canal that irrigates the fields of North Gujarat today. The Prime Minister further added that the inauguration of water-related schemes today will benefit the health of the families, mothers and sisters.

The Prime Minister pointed out that in the last two decades, the government has emphasised connectivity, and with the double-engine government, Narendra and Bhupendra, have become one. Shri Modi pointed out that in 1930, the British had made a road map of the development of Mahesana-Ambaji-Taranga-Aburod railway line, but the subsequent governments paid no heed. “We took out everything, made all the plans, and you can imagine the financial prosperity that it is going to bring”, he added.

The Prime Minister expressed happiness upon the success of Pradhan Mantri Jan Aushadhi Kendra which provides medicines at a subsidised rate. Shri Modi also urged everyone to purchase their medicines from these Jan Aushadhi Kendras where generic medicines which used to cost Rs 1000 now costs Rs 100-200. Talking about tourism, the Prime Minister said that the industry is a source of employment for a large number of people. “Just look at the excavation carried out in Vadnagar!”, Shri Modi exclaimed, “ Relics as old as thousands of years have been found.”

The Prime Minister observed that in the last two decades, sincere efforts have been made to restore Gujarat’s temples and shaktipeeths. “The improved situation at Somnath, Chotila and Pavagadh are examples of this”, he added “Pavagadh did not hoist its flag for 500 years, till the day I arrived and hoisted the flag after 500 years.”

The Prime Minister also laid the foundation stone of multiple projects that include four laning of a section of NH-68 from Patan to Gozariya; a water treatment plant at Chalasan village of Jotana taluka of Mehsana district; a new automated milk powder plant and UHT milk carton plant at Dudhsagar Dairy; Redevelopment & Reconstruction of General Hospital Mehsana; and Revamped Distribution Sector Scheme (RDSS) for Mehsana and other districts of North Gujarat, among others.

The Prime Minister declared the village of Modhera as India’s first 24×7 solar-powered village; This first-of-its-kind project realises the Prime Minister’s vision of solarization of the sun-temple town of Modhera. It involved developing a Ground Mounted Solar power plant and more than 1300 Rooftop solar systems on residential & Government buildings, all integrated with Battery Energy storage system (BESS). The project will demonstrate how India’s renewable energy prowess can empower people at the grassroots.