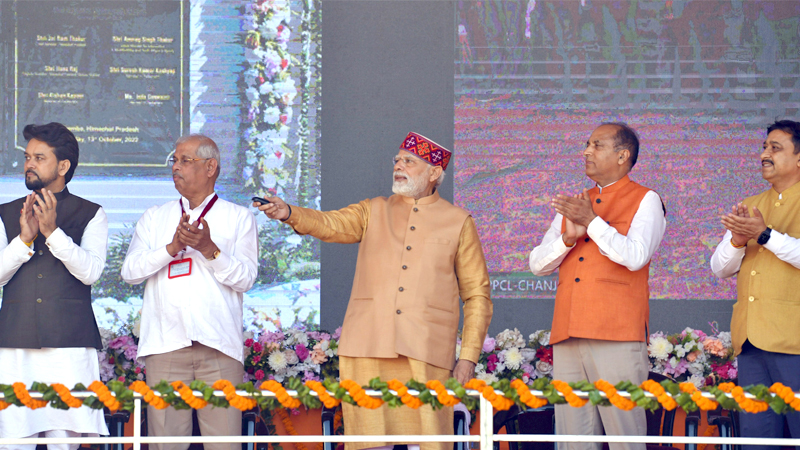 The Prime Minister expressed happiness that he got the opportunity to launch multiple projects on road connectivity and employment generation for Chamba and other remote villages. Remembering his days in Himachal Pradesh, the Prime Minister mentioned that today, the adage that ‘Pahad ka Paani aur Pahad ki Jawani Pahad ke Kaam nahi aati’ i.e. Youth and water of hills is not used for hills, is changing. “Now the youth of hills will play an active part in the development of the area”, he said.

“The next 25 years are very crucial for 130 crore Indians”, said the Prime Minister. He added, “India’s Azadi ka Amrit Kaal has begun during which we have to accomplish the goal of making India a developed country. In the coming few months, 75 years of the establishment of Himachal are also going to be completed. That is, when India celebrates 100 years of independence, Himachal will also celebrate 100 years of its establishment. That is why every day of the coming 25 years is very important for us”, the Prime Minister elaborated.

The Prime Minister recalled the days when Himachal Pradesh had little influence in Delhi and its demands and requests were ignored resulting in important places of faith and natural beauty like Chamba, lagging behind in the development race. Shri Modi informed that special attention was paid to it as Aspirational District as he was aware of the strengths of Chamba. He also expressed happiness about children from Kerala coming to Himachal in the spirit of Ek Bharat Shreshtha Bharat.

The Prime Minister noted that Himachal today realizes the strength of the double-engine government which has doubled the pace of development in the state. The Prime Minister remarked that the previous governments would provide services to only those areas where the burden of work and stress remained low and political benefits were high. As a result, the development rate of remote and tribal areas remained fairly low. “Be it roads, electricity or water, the people of such areas were the last ones to receive benefits”, Shri Modi said, “The working style of double-engine government is different from the rest. Our priority is how to make people’s lives easier. That’s why we are giving maximum emphasis on tribal areas, and hilly areas.” He listed measures like providing gas connections, piped water, health services, Ayushman Bharat, and road connectivity that are changing lives in remote and hilly areas. “If we are making wellness centres in the villages, at the same time, we are opening medical colleges too in the districts”, he emphasized. He also mentioned how Himachal was prioritized in vaccination in order to protect tourism. Shri Modi complimented the Chief Minister and his team for reaching cent per cent vaccination the fastest in the country.

Talking about the construction of rural roads, the Prime Minister said that till 2014, rural roads of 7000 km in length were constructed since Independence with an expenditure of 1800 crores but in the last 8 years, 12000 km of roads with a financial outlay of just 5000 crores have been constructed. Schemes started today will create 3000 km of rural roads, he informed.

The Prime Minister said that gone are the days when Himachal Pradesh used to come to Delhi with requests. Now Himachal comes with information about new projects and details of its progress and demands for its rights. “Your (people’s) order is supreme for me. You are my high command. I consider this my good fortune, that is why serving you has different joy and gives me energy”, the Prime Minister said.

Underlining the development in the last 8 years, the Prime Minister said, “A Maha Yagya of rapid development is going on in the hilly areas, in the inaccessible areas, in the tribal areas all over the country.” Shri Modi informed that its benefits are not only limited to Chamba of Himachal but areas like Pangi-Bharmaur, Chhota-Bada Bhangal, Girimpar, Kinnaur and Lahaul-Spiti are also reaping the benefit. He congratulated Chamba for securing second place in the development ranking of Aspirational Districts.

Underlining the focus on the development of tribal communities, the Prime Minister informed that the government has taken another landmark decision in giving the tribal status to the Hati community of Giripar area of Sirmaur. “It shows how much priority our government is giving to the development of the tribal people”, he added. The Prime Minister interjected that the previous governments of Himachal and at the Centre thought of the remote and tribal villages only at the time of elections, but the double-engine government of today strives to serve the people twenty four seven. Recalling the efforts of the government to provide relief to poor families during the corona pandemic, the Prime Minister highlighted the free ration programme. “The world looks at India in astonishment that the government has been providing food grains to more than 80 crore people in the country for the past one and half years”, he added.  Shri Modi also highlighted the success of the Covid vaccination programme in India and credited its success to the active participation of the workers from the health department and ASHA workers. “Such works of development take place only when the service spirit is strong”, Shri Modi added.

Throwing light on the challenges faced by hilly and tribal areas in terms of employment, the Prime Minister said that we are trying to convert the strength of the area into the strength of the people here. “The wealth of water and forest in tribal areas is priceless”, he said. The Prime Minister pointed out that Chamba belongs to the area of the country where the generation of hydroelectricity was started. The Prime Minister underlined that the projects for which the foundation stone has been laid today will increase the share of Chamba and Himachal in the field of power generation. “Chamba, Himachal will earn hundreds of crores from the electricity generated here and the youth of this place will get employment opportunities”, he said. “Last year also I had the opportunity to inaugurate and lay the foundation stone of 4 such big hydro-electric projects. The Hydro Engineering College which was started in Bilaspur a few days back will also benefit the youth of Himachal”, he said.

Highlighting Himachal’s strength in horticulture, animal husbandry and craft & arts, the Prime Minister praised the local self-help groups for promoting local products like flowers, Chamba’s Chukh, Rajma Madra, Chamba Chappal, Chamba Thal and Pangi ki Thangi. He called these products the heritage of the country. Citing the example of Vocal for Local, the Prime Minister appreciated the women associated with Self Help Groups due to their impetus to efforts of the government to promote local products. The Prime Minister informed that these products are also being promoted under the One District One Product Scheme and he tries to present these things to foreign dignitaries, so that the name of Himachal goes out in the whole world, and more people find out about the products made in Himachal.

The Prime Minister said “The double engine government is a government that respects its culture, heritage and faith. Including Chamba, the whole of Himachal is a land of faith and heritage.” Throwing light on the cauldron of heritage and tourism of Himachal Pradesh, the Prime Minister recalled his visit to the Dussehra Festival in Kullu and remarked that we have heritage on one side and tourism on the other. Tourist places like Dalhousie, and Khajjiar is going to be a driving force for Himachal in terms of spirituality and tourism wealth. The Prime Minister said, “Only the double-engine government recognizes this power. Himachal has made up its mind and will change the old custom and will create a new tradition.”

The Prime Minister laid the foundation stone of two hydropower projects – the 48 MW Chanju-III Hydro-electric Project and the 30 MW Deothal Chanju Hydro-electric Project. Both these projects will generate over 270 million units of electricity annually and Himachal Pradesh is expected to get annual revenue of around Rs. 110 crores from these projects.

The Prime Minister also launched Pradhan Mantri Gram Sadak Yojana (PMGSY) – III in Himachal Pradesh for the upgradation of around 3125 kilometres of roads in the state. More than Rs. 420 crores has been sanctioned by the Central Government under this phase for the upgradation of 440 kilometres of roads in 15 border and far flung blocks of the state.