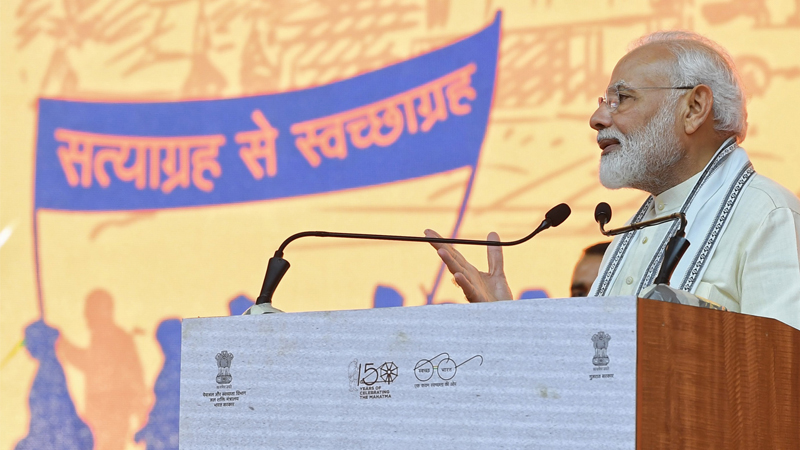 Prime Minister, Shri Narendra Modi, dedicated a Swachh Bharat India to the people of India and the Father of the Nation, Mahatma Gandhi.

Addressing 20,000 Swachhagrahis and Sarpanches assembled from all over the country at a massive public event at the Sabarmati Riverfront in Ahmedabad, Gujarat, the Prime Minister said that the number of people practicing open defecation in India has gone down from 600 million in 2014, to negligible today, through an intensive behaviour change programme under the Swachh Bharat Mission (SBM). He said that by alleviating 60% of the world’s share of people defecating in the open, India has significantly contributed to the global achievement of SDG 6.

He said that a Clean and Open Defecation Free (ODF) India on 2nd October 2019 was the most befitting tribute possible to give to Mahatma Gandhi on his 150th birth anniversary. He saluted the work done by lakhs of Swachhagrahis in response to the Mission’s clarion call for making Swachhata a jan andolan, a people’s movement and physically bowed to the gathering to express his gratitude.

The Prime Minister said that it was symbolic that the event was happening at Sabarmati Riverfront because it was at Sabarmati Ashram that Bapu gave life to both, the Satyagraha and the Swachhagraha. In that sense, he said that the success of Swachhagraha was history repeating itself, much like the success of Satyagraha as both were based on the tenets of people’s participation.

The Prime Minister underscored that the accomplishment was just a step in the direction of Swachh Bharat, which will be a continuous process with focus on sustaining the gains made so far and ensuring that no one is left behind. He said that the Jal Jeevan Mission would be an important step in that direction, sharing that the government has decided to allocate Rs 3.5 lakh crores on it. He added that the people of India need to work together to curb the use of single use plastic.