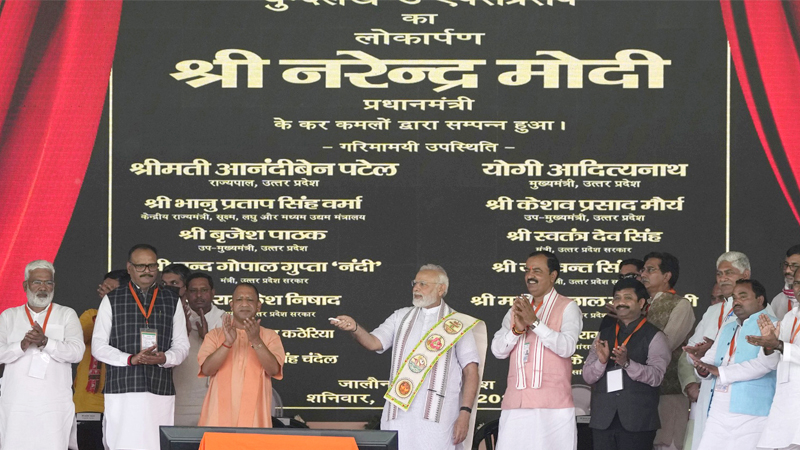 Addressing the gathering, the Prime Minister recalled the glorious traditon of hard-work, valor and cultural richness of Bundelkhand region. He said “the land that produced countless warriors, where the devotion for India flows in blood, the prowess and hard work of local sons and daughters have always brightened the name of the country.”

Talking about the difference that will be brought about by the new expressway, the Prime Minister said “the distance from Chitrakoot to Delhi has been reduced by 3-4 hours by the Bundelkhand Expressway, but its benefit is much more than that. This expressway will not only give speed to vehicles here, but it will accelerate the industrial progress of entire Bundelkhand.”

The Prime Minister emphasized that gone are the days when such great infrastructure and facilities were limited to large cities and selected areas of the countries. now , under the spirit of Sabka Saath Sabka Vikas, even the remote and neglected areas are witnessing unprecedented connectivity. He continued that because of the expressway, the region will see many opportunities of development, employment and self employment. He said that connectivity projects in Uttar Pradesh are connecting many areas which have been ignored in the past. For example, Bundelkhand Expressway passes through seven districts, viz. Chitrakoot, Banda, Mahoba, Hamirpur, Jalaun, Auraiya and Etawah. Similarly, other Expressways are connecting every nook and corner of the state, leading to a situation where, “every corner of Uttar Pradesh is ready to move forward with new dreams and new resolutions”. The Double-Engine Government is working in that direction with renewed viogour, he said.

Regarding improving air connectivity in the state, the Prime Minister said that new airports terminals came up in Prayagraj. Kushinagar got new airport and work is going on in Jewar, NOIDA for a new airport and many more cities are being connected with air travel facilities. This will give a push to tourism and other development opportunities, he said.

Shri Modi remarked about the change of pace and said that doubling of railway line increased to 200 Km from 50 km per year. Similarly number of Common Service Centers in Uttar Pradesh increased from 11,000 in 2014 to 1 lakh 30 thousand Common Service Centers, today. From 12 Medical Colleges, UP, today has 35 medical colleges and work on 14 more is underway, he added.

The Prime Minister noted that the stream of development on which the country is moving today has two aspects at its core. One is intention and the other is decorum (Irada and Maryada). We are not only creating new facilities for the present of the country but are also building the future of the country. Projects completed in Uttar Pradesh fully honour the ‘maryada’, limit of deadlines, he said. Projects like upgradion of facilities and renovation at Baba Vishwanath Dham, Gorakhpur AIIMS, Delhi-Meerut Expressway and Bundelkhand Expressway are the examples of this as it was the present government which both laid the foundation and dedicated these projects to the nation. By delivering the projects before time, we are respecting people’s mandate and their confidence, he said. He exhorted the people to organize many events in the run up to upcoming Independence Day. We should remember our freedom fighters and create an atmosphere of new resolution in next one month, he said.

Speaking about the balanced development, the Prime Minister said that as development reaches ignored and small cities, it leads to realization of social justice. As modern infrastructure reaches much ignored Easter India and Bundelkhand, this amounts to social justice. Backward districts that were left to fend for themselves are now witnessing development, this too is social justice. Toilets for the poor, connecting villages with roads and tap water too is social justice, he said. The Prime Minister informed that the government is working continuously to ameliorate another challenge of Bundelkhand. He elaborated that the Government is working on Jal Jeevan Mission to provide piped water to every household.

The Prime Minister listed Ratauli Dam, Bhavani Dam, Majhgaon-Chilli sprinkler irrigation project as effort to take water of Bundelkhand rivers to maximum numboer of the local people. Ken-Betwa link project will change the lives of people of the region, he said.

The Prime Minister reiterated his request for contribution by the people of Bundelkhand in the campaign for 75 Amrit Sarovers in every district.

Referring to the role of Make In India Campaign in strengthening the small and cottage industry the Prime Minister underlined the success of the toy industry. He said due to the efforts of the government, artisans, industry and the citizens there has been a drastic cut in the import of toys. This will benefit poor, deprived, backward, tribals, dalits and women, he pointed out.

The Prime MInister also highlighted the contribution of Bundelkhand in the field of sports. He said that the highest sporting honour is named after the local son Major Dhyanchand. He also mentioned Shaili Singh, International athlet from the region who brought laurels in under-20 world athletics championship.

The government has been committed to enhancing connectivity across the country, a key feature of which has been the work towards improvement in road infrastructure. A significant endeavour towards this was the laying of foundation stone for the construction of Bundelkhand Expressway by the Prime Minister on 29 February, 2020. The work on the Expressway has been completed within 28 months, an indication of the work culture of New India where projects are delivered on time.

The 296 Km, four-lane expressway has been constructed at a cost of around Rs 14,850 crores, under the aegis of Uttar Pradesh Expressways Industrial Development Authority (UPEIDA), and can later be expanded up to six lanes as well. It extends from NH-35 at Gonda village near Bharatkoop in Chitrakoot district to near Kudrail village in Etawah district, where it merges with the Agra-Lucknow expressway. It passes through seven districts, viz. Chitrakoot, Banda, Mahoba, Hamirpur, Jalaun, Auraiya and Etawah.

Along with improving connectivity in the region, the Bundelkhand Expressway will also give a major boost to economic development, resulting in the creation of thousands of jobs for the local people. Work on the creation of industrial corridor in Banda and Jalaun districts, next to the Expressway, has already been started.