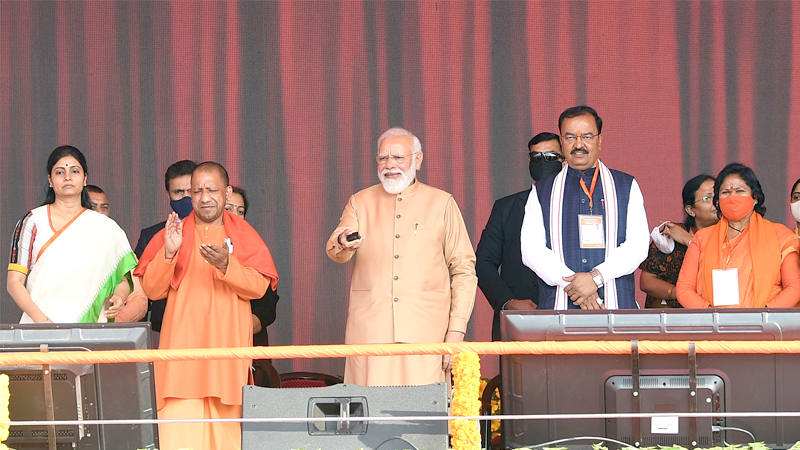 Prime Minister Shri Narendra Modi visited Prayagraj and participated in a programme being held to empower women, especially at the grassroot level. The Prime Minister transferred an amount of Rs. 1000 crore in the bank account of Self Help Groups (SHGs), benefitting around 16 lakh women members of the SHGs. This transfer is being done under the Deendayal Antyodaya Yojana – National Rural Livelihood Mission (DAY-NRLM), with 80,000 SHGs receiving Community Investment Fund (CIF) of Rs. 1.10 lakh per SHG and 60,000 SHGs receiving Revolving Fund of Rs. 15000 per SHG. The programme witnessed the Prime Minister encouraging Business Correspondent-Sakhis (B.C.-Sakhis),  by transferring Rs. 4000 as first month’s stipend in account of 20,000 B.C.-Sakhis. During the programme, the Prime Minister also transferred a total amount of over 20 crore to more than 1 lakh beneficiaries under the Mukhya Mantri Kanya Sumangala Scheme.  The Prime Minister laid the foundation stone of 202 Supplementary Nutrition Manufacturing Units.

Speaking on the occasion, the Prime Minister paid tribute to the doyen of Hindi literature Acharya Mahavir Prasad Dwivedi on his death anniversary. He said Prayagraj has been the land of confluence of Ganga-Yamuna-Saraswati, the symbol of our mother power for thousands of years. Today this pilgrimage city is also witnessing such a wonderful confluence of women-power, he said.

The Prime Minister said the entire country is witnessing the work being done for women empowerment in Uttar Pradesh. The Prime Minister said schemes like Mukhyamantri Kanya Sumangala Yojana, under which he transferred  crores of rupees to the accounts of more than one lakh beneficiary daughters of the state today, are becoming a great medium of trust for the rural poor and for the girls.

The Prime Minister remarked that the security, dignity and respect ensured by the double-engine government for the women of UP is unprecedented.The women of Uttar Pradesh, the Prime Minister said, have decided that they will not allow the return of earlier circumstances. The Prime Minister mentioned that the government has tried to awaken the consciousness of society to prevent sex selective abortions by Beti Bachao Beti Padhao campaign. This has resulted in an increase in the numbers of daughters in many states, he said. The Prime Minister said the Government is focused on immunization of pregnant women, delivery in hospitals and nutrition during pregnancy. Under the Pradhan Mantri Matru Vandana Yojana, Rs 5000 is deposited in the bank account of women during pregnancy, so that they can take care of proper diet.

The Prime Minister listed many steps that have led to enhanced dignity of women. With the construction of crores of toilets under the Swachh Bharat Mission, facility of gas connection under the Ujjwala scheme, and tap water in the house itself, a new convenience is also coming in the lives of sisters, the Prime Minister said. .

The Prime Minister remarked that for decades, house and property were considered as the right of men only. He said the schemes of the government are removing this inequality. Pradhan Mantri Awas Yojana is the biggest example of this. The houses being given under the Pradhan Mantri Awas Yojana are being built in the name of women on priority basis.

The Prime Minister said that in the schemes being run for employment and increasing the income of the family, women are being made equal partners. Today, Mudra Yojana is encouraging new women entrepreneurs, even from poor families in  villages. He added that women are also being linked with self-help groups and rural organizations across the country through the Deendayal Antyodaya Yojana. “I consider the sisters of women self-help groups to be the champions of the AtmaNirbhar Bharat campaign. These self-help groups are actually National Help Groups”, the Prime Minister emphasized.

The Prime Minister remarked that the double-engine government, without any discrimination is working relentlessly to empower the future of daughters. He also informed about the important decision regarding the legal age of marriage for girls. “Earlier, the legal age of marriage for sons was 21 years, but for daughters it was only 18 years. The daughters also wanted that they should get time to pursue their studies and to get equal opportunities. Therefore, efforts are being made to bring the age of marriage to 21 years for daughters. The country is taking this decision for the sake of daughters”, Shri Modi said.

The Prime Minister referred to the improvement of the law and order situation in the state in recent years. He said the biggest beneficiary of this eradication of mafia raj and lawlessness are the  sisters and daughters of UP. He lauded the Chief Minister Shri Yogi Adityanath for bringing the situation under control.

The Prime Minister said “today, there is security as well as rights in Uttar Pradesh. Today UP has possibilities as well as business. I have  full faith that with the blessings of our mothers and sisters, no one can push this new UP back into the darkness”.