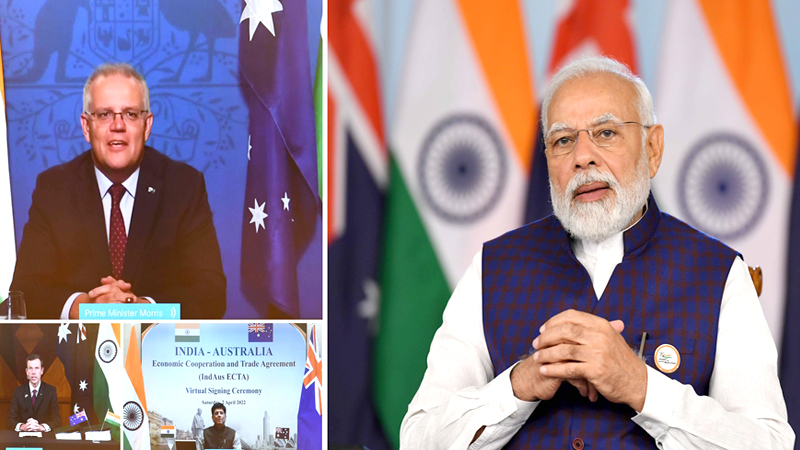 The India-Australia Economic Cooperation and Trade Agreement (“IndAus ECTA”) was signed by Shri Piyush Goyal, Union Minister of Commerce and Industry, Consumer Affairs, Food and Public Distribution and  Textiles, Government of India and Mr. Dan Tehan, the Minister for Trade, Tourism and Investment, Government of Australia in a virtual ceremony, in the presence of Hon’ble Prime Minister of India, H.E. Shri. Narendra Modi and the Hon’ble Prime Minister of Australia, H.E. Scott Morrison today.

Speaking after the signing, the Prime Minister, Shri Narendra Modi, noted that this is his third interaction with his Australian counterpart in last one month. He conveyed his appreciation for the leadership of the Prime Minister Morrison and the efforts of his Trade Envoy and former Prime Minister of Australia Mr Tony Abbott. He also commended the Trade Ministers and their team for a successful and effective engagement.

The Prime Minister said that signing of IndAus ECTA in such a short span of time reflects the depth of the mutual confidence between the two countries. Shri Modi underlined the huge potential that exists in the two economies to fulfil the needs of each other and this agreement will enable the two countries to fully leverage these opportunities. “This is a watershed moment for our bilateral relations”, he emphasized. The Prime Minister said “On the basis of this agreement, together, we will be able to increase the resilience of supply chains, and also contribute to the stability of the Indo-Pacific region.”

Terming ‘people to people’ relations as the key pillar of the relationship between India and Australia, the Prime Minister said “This agreement will facilitate the exchange of students, professionals, and tourists between us, which will further strengthen these relations.”

The Prime Minister also conveyed his wishes to the women cricket team of Australia for upcoming World Cup final.

Prime Minister Morrison of Australia also noted the remarkable scale of cooperation between the two country in recent years and thanked the Prime Minister Modi for his leadership. Calling signing of IndAus ECTA, another milestone in the growing relationship between India and Australia, the Australian Prime Minister said that the agreement further develops on the promise of the relationship. Apart from increased trade and economic cooperation, said Mr Morrison, IndAus ECTA will further deepen the warm and close ties between the people of the two countries by expanding work, study and travel opportunities. It will send a powerful signal to our businesses that ‘one of the biggest doors’ is now open as two dynamic regional economies and like-minded democracies are working together for mutual benefit. It also delivers a clear message that democracies are working together and ensuring the security and resilience of supply chains, he added.

Indian and Australian Ministers also expressed their views on growing strength of the relationship between the two countries before signing of the agreement.

Growing India-Australia economic and commercial relations contribute to the stability and strength of a rapidly diversifying and deepening relationship between the two countries. The IndAus ECTA, encompassing trade in goods and services, is a balanced and equitable trade agreement, which will further cement the already deep, close and strategic relations between the two countries and will significantly enhance the bilateral trade in goods and services, create new employment opportunities, raise living standards and improve the general welfare of the peoples of the two countries.

Trade Ministers of Australia and India,

And all the friends of the two countries who have joined us,

Today, in less than a month, this is my third face-to-face interaction with my friend, Scott. We had a very productive discussion in the Virtual Summit last week. At that time, we had instructed our teams to conclude the negotiations on the Economic Cooperation and Trade Agreement at the earliest. And I am very happy that today this important agreement is being signed. For this extraordinary achievement, I heartily congratulate the Trade Ministers and their officials of both the countries.

I would also like to particularly congratulate the former Prime Minister of Australia and the current trade envoy of the Prime Minister Morrison, Mr. Tony Abbott. His efforts have contributed in accelerating the process.

Conclusion of such an important agreement in such a short time shows how much mutual trust exists between the two countries. This is indeed a watershed moment for our bilateral relationship. Our economies have great potential to meet each other’s needs. I am sure that through this agreement we will be able to take full advantage of these opportunities.

This agreement will make it easier for us to exchange students, professionals, and tourists, further strengthening these ties. I once again congratulate the teams of the two countries on the effective and successful negotiation of the India-Australia Economic Cooperation and Trade Agreement – “IndAus ECTA”.

My heartfelt thanks to Prime Minister Morrison for joining today’s event, and my best wishes for the successful conduct of the upcoming elections in Australia. And also best wishes to the Australian women’s cricket team for the World Cup final to be played tomorrow.

DISCLAIMER – This is the approximate translation of Prime Minister’s remarks. Original remarks were delivered in Hindi.