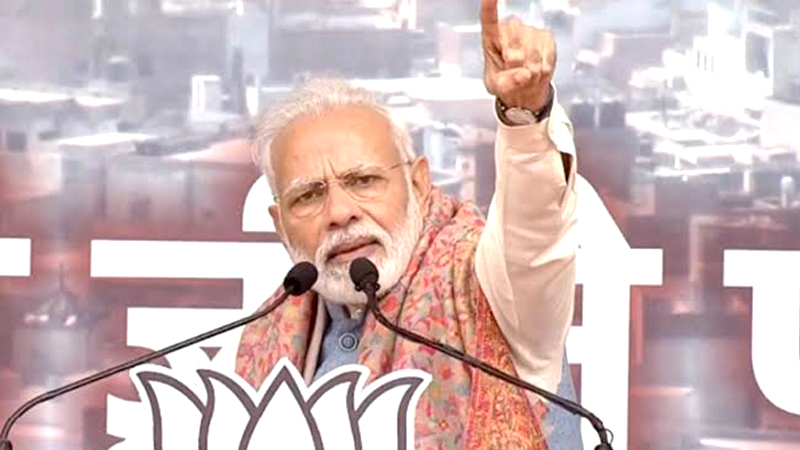 Prime Minister Shri Narendra Modi kicked off the BJP’s campaign for the upcoming Delhi assembly elections by addressing a mega rally at Ramlila Maidan. Amid the chants and slogans of people, PM Modi said unity in diversity is the hallmark of India. “Ramlila Maidan is a historic place. I can see an end to uncertainties on your faces,” he said to the residents of unauthorized colonies.

Congratulating residents of unauthorized colonies, PM Modi said, “Even after several decades after Independence, a large section of population in Delhi had to face fear, uncertainty, deceit & false electoral promises. Illegal, sealing, bulldozer and a cut-off date – life of a large population in Delhi’ was confined around these words. I am happy that the BJP and the government have had the opportunity of bringing a new dawn in the lives of 40 lakh people of Delhi.”

PM Modi during his speech at the Ramlila Maidan said that earlier governments did nothing to expand the metro network. He added that the fourth phase of Delhi Metro was stalled unnecessarily by the previous government. “25 km of new metro route added annually in last five years, it was 14 km earlier. In the last five years, we’ve made unprecedented development in Delhi Metro. We also built the Peripheral Expressway to decongest Delhi,” he said.

The Prime Minister addressed the Citizenship Amendment Act issue that has caused massive protests across India and said that fake news and misinformation regarding the act is being spread to provoke people by the Congress and its cronies.

Assuring everyone that Modi Government not stripping anyone of their rights, PM Modi highlighted, “Some political parties are spreading rumours, they are misleading people and inciting them. I want to ask them, when we authorized the unauthorized colonies, did we ask anyone their religion? Did we ask which political party they support? Did we ask for documents from 1970, 1980?”

PM Modi hit out at the opposition parties for spreading rumours about elaborate paperwork in to prove Citizenship in the CAA. He said his government never put the restriction of paperwork when it provided welfare schemes to the poor. “Hindus, Muslims, Sikhs, Christians all were befitted, everyone who lives here was benefitted. We have never asked anyone if he goes to temple or mosque when it comes to implementing our schemes. We are dedicated to the mantra of ‘Sabka Saath, Sabka Vikas’,” he added furthermore.

In a furious attack on the violent protests against the CAA, PM Modi said, “Hate me but don’t hate India. Burn my effigies but don’t burn a poor man’s auto-rickshaw. What will you get from beating poor people, poor drivers and policemen.” He asserted that the police is there to always help the people and attacking them is not justified. 33,000 police personnel laid down their lives during work since independence but now being attacked mercilessly.

Citing no rules framed about NRC, PM Modi remarked, “There have been multiple rumours about NRC too. NRC was implemented in Assam after the Supreme Court order. There are no rules that have been framed, it has not been introduced in Parliament. While we are giving you your right with the unauthorized colonies bill, will we then try and snatch your right?”

Training his guns at the Congress party, PM Modi said, “Politicians belonging to 100-year old political parties are not voicing for peace. Now that the people of the country have dismissed them, they have gone back to their old measures of divide and rule. Citizenship law and NRC have nothing to do with Indian Muslims and there is no detention centre in the country.”

PM Modi while reassuring that no one’s citizenship is threatened, said, ” Who understands the pain of refugees better than people of Delhi? CAA, in fact, provides citizenship to the religiously persecuted minorities from Pakistan, Afghanistan and Bangladesh. CAA is not to take away citizenship, it is to give citizenship to people.” He requested the youth of the country to read the Act in detail and told them not to fall prey to the rumors of detention-centers being spread by Urban Naxals and Congress.

The Prime Minister attacked the Congress for opposing the Citizenship Amendment Act and named few of its leaders who once supported the Act. He also quoted ex-PM Manmohan Singh’s remarks in support of giving citizenship to persecuted minorities from Bangladesh.

PM Modi said that during the tenure of his government, India’s relationship with Gulf countries had improved. He highlighted that Muslim countries released many Indian prisoners, and Saudi increased Hajj quota because of India’s growing ties with the Islamic nations.

He appealed to people to contribute in Swachh Bharat Abhiyan and urged everyone to stop using single-use plastics. Several party leaders and karyakartas were present at the event.