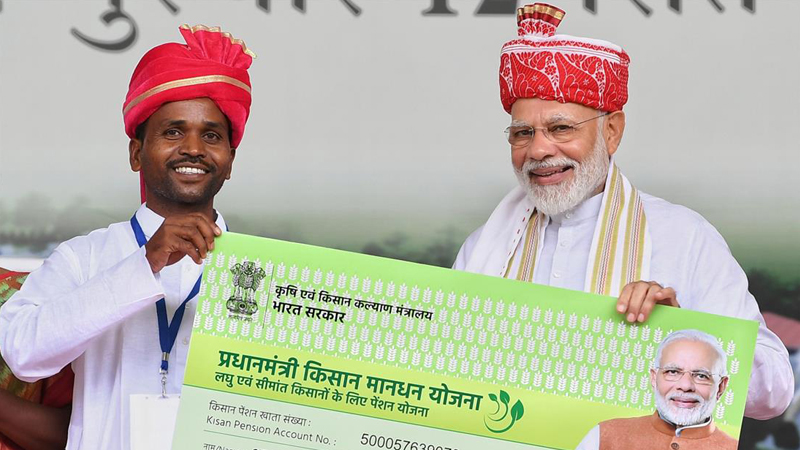 The Scheme shall secure the lives of 5 Crore Small and Marginal Farmers by providing a minimum pension of Rs 3000 per month, to those who attain 60 years of age.

Prime Minister also launched the National Pension Scheme for the Traders and The Self-Employed.

The scheme aims at providing a minimum assured pension of Rs 3000, to small traders and self – employed after attaining the age of 60 Years. Around 3 Crore Small traders would be benefited from the scheme.

PM stated that the electoral promise of a strong government that will fulfill your aspirations is delivered.

Prime Minister Narendra Modi reiterated “Development is our priority as well as commitment. Our government is trying to provide a shield of social security to every Indian.”

The Prime Minister exhorted the country to reduce the usage of Single-Use Plastic.

Referring to the Swachhata Hi Seva Programme launched on the 11th September 2019, the Prime Minister said, “The Swachhata Hi Seva campaign has started in the country. Under this campaign, by October 2, we have to collect single-use plastic in our homes, schools, offices. On October 2, the day of Gandhiji’s 150th birth anniversary, we have to remove that plastic pile”.