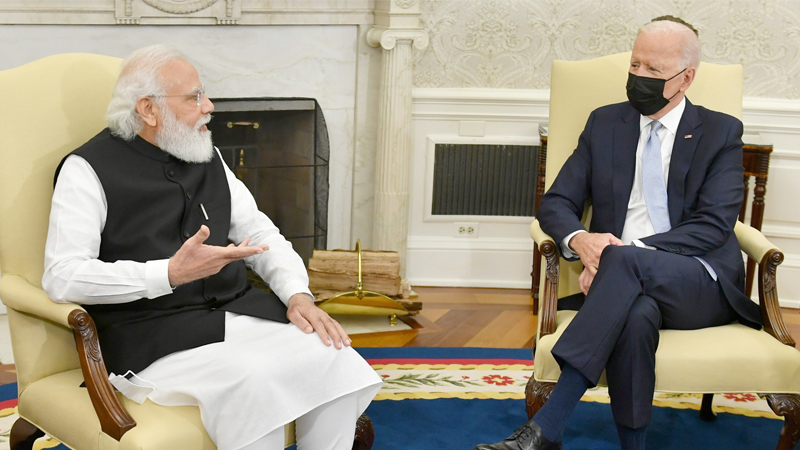 First of all, Mr. President I would like to express my gratitude for this very warm welcome full of friendship, not only to me but to my delegation.

Mr. President, in 2016, and even before that in 2014, we had an opportunity to have discussions in detail. And at that time Mr. President you had laid out your vision for the relations between India and the United States and you had enunciated that in great detail and really that was a vision that was inspirational and today Mr. President, as President, you are making all efforts and taking initiative, to implement that vision and I warmly welcome that.

Mr. President, you have talked/spoken in detail about the Biden surname in India and in fact you had mentioned that to me earlier too. Well, after you mentioned it to me I hunted for documents and today I have brought along some documents. May be we’ll be able to take this matter forward and may be those documents could be of use to you.

Mr. President, I firmly believe that in our summit talks and summit meeting today, what I see is that this is the third decade of the 21st century, this is the first year of the third decade and I see that when I look at the entire decade, I find that under your leadership, the seeds have been sown for the Indo-US relations to expand and for all democratic countries in the world, this is going to be a transformative period. I can see that, Thank You!

This is when I see that this transformative period is in Indo-US relations, and when I talk about traditions, I am talking about the democratic traditions, democratic values, traditions to which both our countries are committed and I find that importance of these traditions will only increase further.

Similarly, Mr. President, you mentioned that more than 4 million Indian-Americans who are participating in the journey of progress of America and when I look at the importance of this decade and the role that is going to be played by this talent of Indian-Americans, I find that this people to people talent will play a greater role and Indian talent will be a co-partner in this relationship and I see that your contribution is going to be very important in this.

Mr. President, on similar lines, the most important driving force in the world today would be that of technology and the technology that is going to be for the service and for the use of humanity and I find that opportunities for this are going to be tremendous.

Similarly, Mr. President, between India and the United States, trade will continue to assume importance and we find that the trade between our two countries are actually complementary. There are things that you have and there are things that we have and then we in fact complement each other. And I find that in the area of trade during this decade, that is also going to be tremendously important.

Mr. President, you just mentioned that on the 2nd October, we will be celebrating the birth anniversary of Mahatma Gandhi and Mahatma Gandhi always used to talk about the principle of trusteeship of the planet and this decade, Mr. President from that point of view, is also going to be important as this entire principle of trusteeship. It means that the planet that we have, we have to bequeath it to the following generations and this sentiment of trusteeship is going to assume more and more importance globally but also between the relations between India and the United States and it is these ideals that Mahatma Gandhi espoused when he talked about trusteeship of the planet and where the responsibility of the global citizens is only going to go up.

Mr. President, you mentioned very important issues and after assuming charge as President of the United States, you have taken very unique initiatives whether that be COVID 19, climate change or even Quad and in the days after taking this initiative, you have made and deployed great efforts to implement your vision and also today we have this opportunity to discuss all these issues in great detail. How and after our discussions, we will look towards how we can work further together not only for our respective countries but for the entire world how we can take positive actions and I am quite and absolutely convinced that under your leadership whatever we do, it will be extremely relevant for the entire world

Once again Mr. President, let me thank you profusely for this very warm welcome.