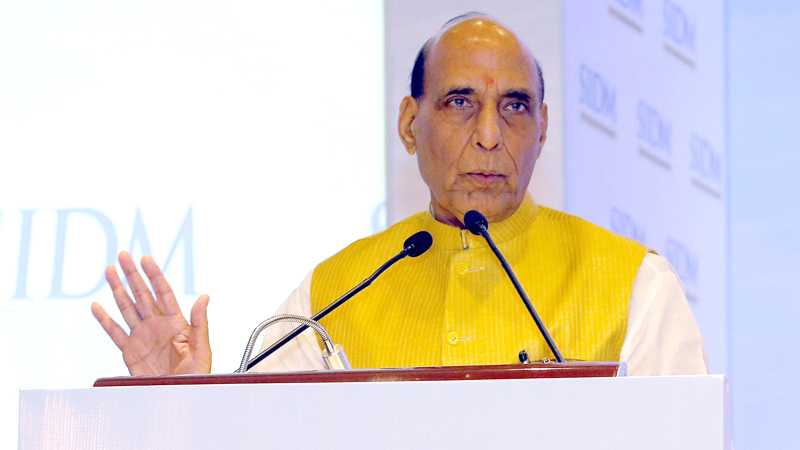 Government has created an atmosphere of jointness to ensure modernisation of the Armed Forces in the rapidly evolving global security scenario. This was stated by Raksha Mantri Shri Rajnath Singh during his address at Society of Indian Defence Manufacturers (SIDM) Annual General Meeting in New Delhi on September 28, 2021. Shri Rajnath Singh said, countries around the world are now focusing on the modernisation of their militaries and the demand for military equipment is rapidly increasing due to emerging security concerns, border disputes and maritime dominance.

“India is capable of meeting these needs through a cost-effective and quality approach. By India, we mean public sector, private sector, academia, research & development. We believe in taking them all onboard together,” said Shri Rajnath Singh.

The Raksha Mantri emphasised that the Indian defence industry is home to manufacturers who can create a perfect blend of state-of-the-art, high quality and cost-effective hardware which will not only bolster national security but make India a net defence exporter. He reiterated the Government’s resolve of ‘Make in India’ and ‘Make for the world’ through past learnings, present works, with focus on empowering the future.

Underlining the importance of indigenisation, Shri Rajnath Singh listed out a number of reforms undertaken by the Government to encourage the participation of private sector and achieve ‘Aatmanirbhar Bharat’ envisioned by Prime Minister Shri Narendra Modi. The Reforms include earmarking 64.09 per cent of the total Capital Acquisition Budget for 2021-22 for domestic capital procurement and 15 per cent of capital procurement budget for direct procurement from private industry; setting up of Defence Industrial Corridors in Uttar Pradesh & Tamil Nadu; introduction of Innovation for Defence Excellence (iDEX); free Transfer of Technology (ToT) through Defence Research & Development Organisation (DRDO) and increase in FDI in defence up to 74 per cent through automatic route & up to 100% through government route.

The Raksha Mantri added that the Government is providing a suitable growth environment to the private sector. “We have opened up opportunities to build a Mega Defence Programme, including fighter aircraft, helicopters, tanks and submarines through a strategic partnership model that will help our private companies become global giants in the years to come. The recent contract of 56 transport aircraft for Indian Air Force is one such example,” he said. Shri Rajnath Singh stated that due to these steps, defence exports have crossed Rs 38,000 crore mark in the last seven years; more than 10,000 Small and Medium Enterprises (SMEs) have joined the defence sector and there has been an increase in research & development, start-ups, innovation and employment.

Shri Rajnath Singh appreciated the suggestions of the private sector that have been incorporated in various policy reforms, including ‘Defence Acquisition Procedure (DAP) 2020, draft Defence Production and Export Promotion Policy (DPEPP 2020), draft Defence Procurement Manual (DPM) 2021 and the two Positive Indigenisation lists. These reforms will not only meet the requirements of our private industry, but also create sustainable and long-term linkages with foreign original equipment manufacturers (OEMs) to meet global demands, he said. The Raksha Mantri assured all possible support of the Government to the industry to achieve this shared vision.

Terming sustainability as an integral part of self-reliance, the Raksha Mantri urged the industry to also focus on emerging areas such as cyberspace & Artificial Intelligence by investing in R&D, developing new technologies & products and taking advantage of government’s policies. He called upon the private players to utilise the country’s talent to achieve this objective.

Saying that the concept of ‘Make in India and Make for the World’ has been a part of Indian civilisational ethos, Shri Rajnath Singh exhorted the industry to keep moving forward and help the Government realise its vision of making India a global manufacturing hub. He expressed confidence that like the White Revolution & Green Revolution, this public-private partnership will be mentioned as Defence Production Revolution in the annals of Indian defence in the times to come.

Appreciating the fact that the number of SIDM members is about to reach 500, Shri Rajnath Singh said the growing popularity of SIDM also reflects the growth of the country’s defence industry. On the setting up of the first SIDM state office in Lucknow & the signing of agreement with the Uttar Pradesh Expressway Industrial Development Authority to promote investments in the UP Defence Industrial Corridor, he stated that these initiatives indicate the quality of vision & approach of SIDM which is essential to achieve the goal of self-reliance.

The Raksha Mantri gave away SIDM Champion Awards in four categories, namely Technology Product Innovation to address defence capability gaps; Import Substitution; creation of niche technological capability for design, manufacturing & testing and export performance of aerospace and defence sector. Congratulating the winners and participants, Shri Rajnath Singh said such efforts are playing an important role in realising ‘Aatmanirbharta’ in defence manufacturing. He exuded confidence that these awards will not only contribute in the design & development of defence equipment, but also assist in achieving the $5 billion defence export target by 2025 set by the Government.

President of SIDM Shri Jayant D Patil, former SIDM President Shri Baba Kalyani and captains of industry were among those present on the occasion.