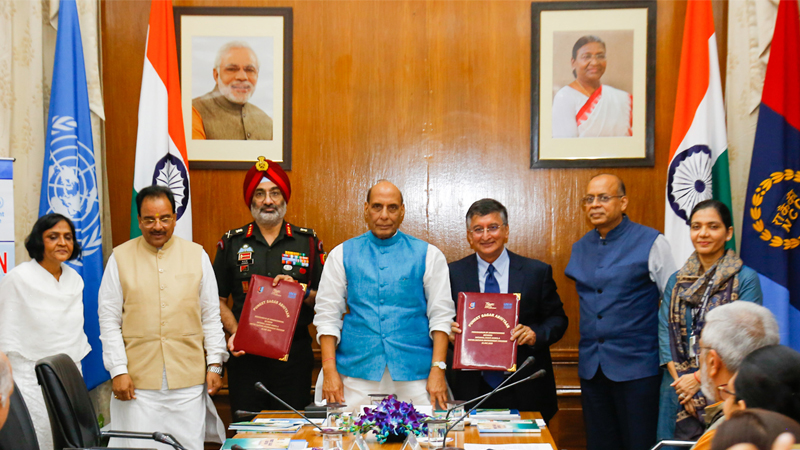 Describing ‘Puneet Sagar Abhiyan’ as one of the noblest initiatives, the Defence Secretary, in his address, lauded the efforts of NCC in making the campaign a grand success. He asserted that 1.5 million NCC cadets have the ability to influence the thinking of youth across the world, exuding confidence that they will be instrumental in making the campaign a mass movement. Dr Ajay Kumar thanked the UNEP for extending its support to NCC for the campaign, stating that “it is our collective responsibility to protect the environment for future generations to live a long and healthy life”.

The ‘Puneet Sagar Abhiyan’ is among the slew of initiatives taken by the Government to realise the vision of Prime Minister Shri Narendra Modi, which he referred to as ‘Panchamrit’ during the 26th United Nations Climate Change conference, COP26, held in Glasgow, Scotland between October 31 to November 13, 2021. The Prime Minister had presented five nectar elements as India’s unprecedented contribution to deal with climate change. These are:

The NCC had, on December 01, 2021, launched ‘Puneet Sagar Abhiyan’, a nationwide flagship campaign, initially for one month, to clean sea shores of plastic & other waste material, while raising awareness about the importance of cleanliness. It was subsequently extended as a Pan-India round-the-year campaign to cover rivers and other water bodies as well.

The NCC, the largest uniformed youth organisation in the world, mobilised its cadets to collect plastic and other waste material. The campaign gained tremendous momentum, acceptance and participation following its launch. Different Ministries and organisations, including Ministry of Environment, Forest and Climate Change, Department of Science & Technology, Indian Navy, Indian Coast Guard, Sainik School Society, Army Welfare Education Society, Border Roads Organisation and National Highways Authority of India have extended their support to the NCC in this noble cause.

Following the growing support and success of the campaign, the UNEP, engaged in this initiative through their ‘Tide Turner Challenge Programme’, decided to join hands with the NCC, with the aim to leverage the youth organisation’s strengths. The UN body has the mandate and knowledge base for addressing various issues relating to environment, including plastic pollution and has a programme for engaging youth.

The aim of the MoU between NCC and UNEP is to synergise and collate efforts towards engaging youth for promoting clean water bodies. The objective is to engage in capacity building and awareness on environmental sustainability through information sharing and training initiatives; promote opportunities for NCC cadets to participate in appropriate national & international platforms related to environment and climate change and engage in and develop joint initiatives of mutual intent pertaining to environment and climate change. The MoU, to remain in force for a period of three years, aims at consolidating, developing and detailing their cooperation and effectiveness to achieve the common objectives in the field of environment.