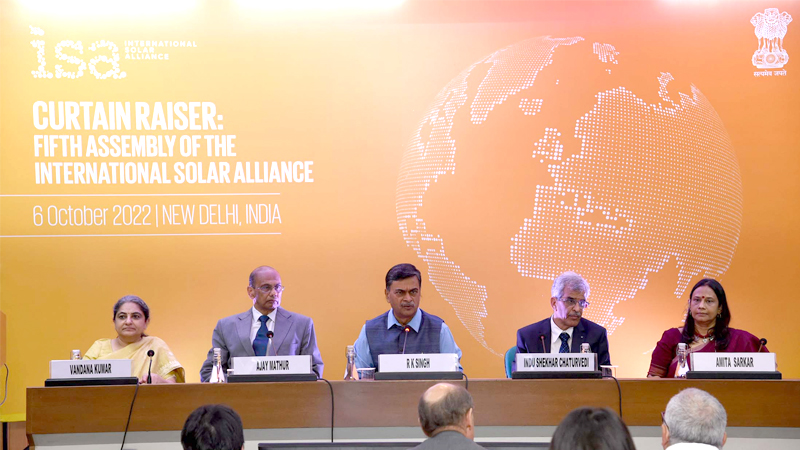 The Fifth Assembly of the International Solar Alliance was inaugurated today by Shri Raj Kumar Singh, Minister of Power and New & Renewable Energy, India in his capacity as the President, International Solar Alliance. The Republic of India holds the office of the President of the ISA Assembly, with the Government of France as Co-President. Ministers from 20 countries and delegates from across 110 Member and Signatory countries and 18 prospective countries joined the inaugural ceremony of the 5th ISA Assembly.

At the occasion of the opening, Shri Raj Kumar Singh stated that the past two years have provided us multiple reminders that the global dependence on fossil fuels is unhealthy, not just for the environment, but also for the economy. The good news is that we already have the tools we need to counter these, and the development in technology is making sure that even more effective resources are made available in the years to come. It is now up to us to decide how quickly we can deploy these. In this pursuit for energy transition, we also have the responsibility of enabling development in the parts of the world that lack access to energy and energy security. 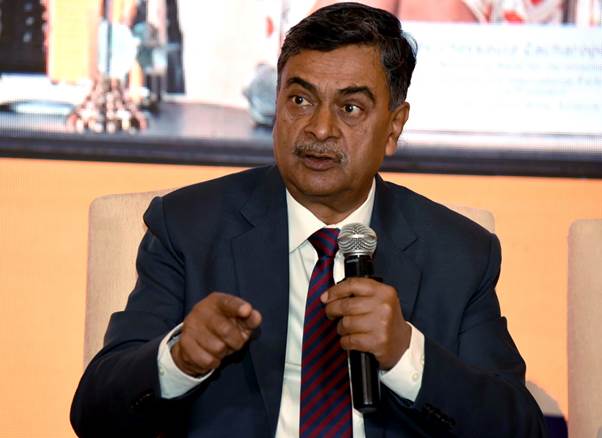 He further remarked that it is our mission that ISA can assist member nations in formulating and implementing solar-ready policies and regulatory development of national energy landscapes and for engaging with public and private sector entities to leverage low cost financing to achieve ISA’s solarisation agenda. The ISA is structured as an international resource hub with in-house technical expertise that will be readily accessible by member nations and is capable of guiding project implementation at scale. The ISA has come a long way since its formation, and we are moving forward at a great pace, thanks to the guidance and support provided by each and every member of ISA. The Assembly is the apex decision-making body of ISA, in which each Member Country is represented. This body makes decisions concerning the implementation of the ISA’s Framework Agreement and coordinated actions to be taken to achieve its objective. The Assembly meets annually at the ministerial level at the ISA’s seat.

It assesses the aggregate effect of the programmes and other activities in terms of deployment of solar energy, performance, reliability, cost, and scale of finance. The Fifth Assembly of the ISA will deliberate on the key initiatives of ISA on three critical issues energy access, energy security, and energy transition.

The deliberations and discussions among representatives from 110 Member Countries at the Fifth Assembly of ISA are expected to lead to a greater consensus among the comity for promoting the deployment of solar power. On the sidelines of the Fifth ISA Assembly, the International Solar Alliance, in collaboration with the Asian Development Bank and the Ministry of New & Renewable Energy, the Government of India will host a High-Level Conference on New Technologies for Clean Energy Transition on 19 October 2022 at Hotel Ashok, Chanakyapuri, New Delhi.

The Conference will feature plenary and thematic technical sessions. While the plenary will frame key issues around solar energy technologies, investments, and markets, the thematic discussions will help deepen understanding of these themes. Speakers from diverse backgrounds: academia, think tanks, industry, the financial sector, and policymakers will participate and share insights and ideas.

ABOUT THE INTERNATIONAL SOLAR ALLIANCE, The International Solar Alliance is an international organisation with 110 Member and Signatory countries. It works with governments to improve energy access and security worldwide and promote solar power as a sustainable way to transition to a carbon-neutral future. ISA’s mission is to unlock US$ 1 trillion of investments in solar by 2030 while reducing the cost of the technology and its financing. It promotes the use of solar energy in the Agriculture, Health, Transport and Power Generation sectors. ISA member countries are driving change by enacting policies and regulations, sharing best practices, agreeing on common standards, and mobilising investments. Through this work, ISA has identified and designed and tested new business models for solar projects; supported governments to make their energy legislation and policies solar-friendly through Ease of Doing Solar analytics and advisory; pooled demand for solar technology from different countries; and drove down costs; improved access to finance by reducing the risks and making the sector more attractive to private investment; increased access to solar training, data and insights for solar engineers and energy policymakers. With the signing and ratification of the ISA Framework Agreement by 15 countries on 6 December 2017, ISA became the first international intergovernmental organisation to be headquartered in India. ISA is partnering with multilateral development banks (MDBs), development financial institutions (DFIs), private and public sector organisations, civil society, and other international institutions to deploy cost-effective and transformational solutions through solar energy, especially in the least Developed Countries (LDCs) and the Small Island Developing States (SIDS).