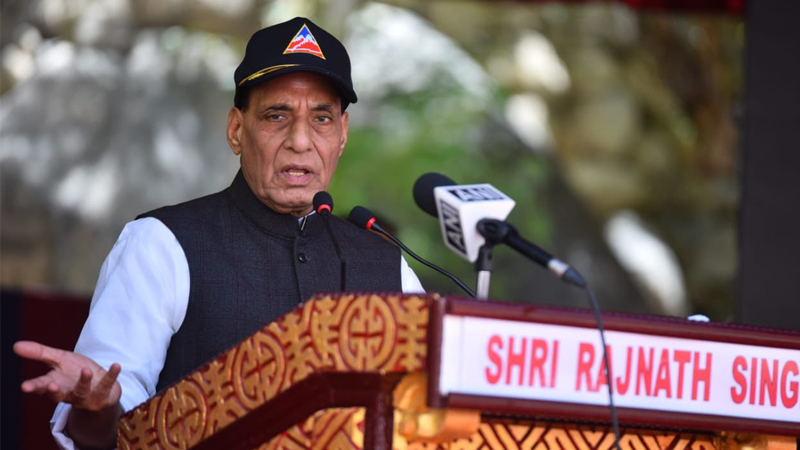 From Kyungam, the Raksha Mantri inaugurated a 50-metre-long bridge constructed on the Leh-Loma Road in Ladakh. This single span steel super structure bridge, which replaces an existing bailey bridge, will ensure unhindered movement of heavy weapon systems, including guns, tanks and other specialised equipment. The Leh-Loma Road, which connects Leh with places such as Chumathang, Hanley and Tso Morori Lake, is vital for access to forward areas in Eastern Ladakh.

In addition, Shri Rajnath Singh virtually inaugurated 62 more bridges – 11 in Ladakh, four in Jammu & Kashmir, three in Himachal Pradesh, six in Uttarakhand, eight in Sikkim, one each in Nagaland and Manipur and 29 in Arunachal Pradesh. The combined cost of the projects is Rs 240 crores and they will provide a tremendous boost to connectivity in the border areas.

Speaking on the occasion, Shri Rajnath Singh lauded BRO’s commitment towards establishing connectivity to far-flung areas, especially during the COVID-19 pandemic, saying that some of these bridges will become a lifeline for many villages located in remote inaccessible areas. Underlining the importance of connectivity, especially in border areas for the development of a nation, he reaffirmed the Government’s resolve to ensure infrastructure development in far-flung border areas and added that today’s inauguration of 63 bridges is an important step in that direction. He expressed confidence that the bridges will play a crucial role in strengthening security as well as promoting the economic development of the respective states through improved connectivity.

On the Government’s decision to bifurcate Jammu & Kashmir and Ladakh as two separate UTs, the Raksha Mantri stated that the strong and visionary steps have bolstered national unity, led to major reduction in terrorist activities sponsored from outside and opened new avenues for the socio-economic development of the people. On the development of Ladakh, Shri Rajnath Singh said a number of welfare schemes are being implemented, including Pradhan Mantri Awas Yojana, National Rural Livelihood Mission, Pradhan Mantri Gram Sadak Yojana, Pradhan Mantri Kaushal Vikas Yojana and Pradhan Mantri Kisan Samman Nidhi, that shows the Government’s resolve towards the welfare of the region. He also reaffirmed the Government’s commitment to start the democratic process in the region.

Lauding the Indian Army for displaying exemplary courage during the Galwan Valley incident in 2020, the Raksha Mantri paid tributes to the bravehearts who laid down their lives in the line of duty. He called for dialogue with neighbouring countries to resolve disputes, maintaining that “India is a peace-loving nation which does not believe in aggression, however if provoked, we will give a befitting reply”. He assured the nation that the Armed Forces are fully prepared to deal with any situation. Shri Rajnath Singh highlighted the reforms undertaken by the Government to strengthen the security at the borders, increase jointness among the Armed Forces and make them self-reliant. “We are moving fast towards building a safe, strong and prosperous nation in every way,” he said.

In his address, DG Border Roads stated that the projects were completed despite the limited working window and COVID-19 pandemic. He said these bridges will assist in speedy mobilisation of the Armed Forces in strategically important sectors, further bolstering the security environment, as also contribute significantly towards the overall economic growth of remote border areas. He reiterated BRO’s resolve in continuing to serve the nation despite challenges.

With the inauguration of 63 bridges in one go, BRO has surpassed its own record of 44 bridges launched in 2020. These 63 bridges, combined with 12 roads dedicated to the nation by Shri Rajnath Singh on June 17, 2021, form a bouquet of 75 infrastructure projects completed by BRO, when the nation is celebrating the 75th anniversary of its Independence.

Raksha Mantri Shri Rajnath Singh interacted with the officers and jawans of Indian Army’s 14 Corps at Karu Military Station in Ladakh on June 28, 2021. In his address, Shri Rajnath Singh paid rich tributes to the brave jawans who laid down their lives in the service of the nation during the Galwan Valley incident in 2020, saying that the country will never forget their supreme sacrifice. He lauded the exemplary courage displayed by the Indian Army during the incident and stated that the nation is proud of its Armed Forces.

Shri Rajnath Singh stated that India is a peace-loving nation that never resorts to any kind of aggression, but at the same time, it is always prepared to give a befitting reply if provoked. He reiterated Government’s stand of resolving disputes through dialogue with neighbouring countries, but assured the nation that safety and security of the nation will not be compromised at any cost. He assured all possible support to the Armed Forces, reaffirming the vision of the Government, under the leadership of Prime Minister Shri Narendra Modi, of a strong military that is capable of dealing with every eventuality.

The Raksha Mantri also commended the 14th Corps for their invaluable contribution during the 1965 Indo-Pak War as well as the 1999 Kargil war.

General Officer-Commanding-in-Chief, Northern Command Lt Gen YK Joshi and General Officer Commanding of the 14 Corps Lt Gen PGK Menon were among those present on the occasion.